Time to clear out another pair of beds: these ones are still quite newly planted, so they don't have much in the way of weeds, but they do need a bit of attention at this end of the year.

In this garden, I've been making leaf mold for three years, so we now have vast amounts of the stuff to use up.

Aha! I said to my current Trainee. Let's use some of our own leaf mold, to mulch those little beds!

Why do we mulch? Or, what exactly is mulching?

Moving on..... "mulch" means a loose covering on the top of the soil. It can be organic - compost, leaf mold, bark chips - or it can be inorganic - shingle, decorative slate chips. The purpose is to protect the soil, by preserving moisture, by smothering and/or repelling weeds: sometimes it's just to make the garden look nicer.

We decided to mulch these beds mostly for decorative purposes, hence my suggestion of using the leaf mold, as it doesn't contain much in the way of nutrients, but that's ok because the soil in these beds was completely replaced when we did the original planting, two Trainees ago (*waves to Second Trainee*), which means that it isn't stale, tired old soil, in need of additional organic matter. No, it's still quite fresh and lush, but we noticed that the soil levels had sunk slightly, leaving a couple of the shrubs sitting very slightly proud of the soil level - that means, sitting a wee bit too high. If they had only just been planted, I would have insisted on lifting them and replanting at the correct depth: but as they've been down for two years now, that's not an option.

Well, it is: we could dig them up and replant them, but it would be a lot of upheaval and damage to the shrubs, which are just settling in nicely: so it's easier to raise the soil level by adding more material. 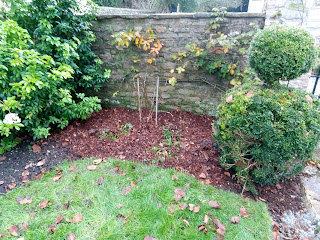 So, are there are Tricks of the Trade to mulching?

The first job is obviously to weed the beds: remove everything that shouldn't be there, and take the opportunity to cut down any lingering herbaceous material that has now gone brown.

There is absolutely no point in tipping a whole load of mulch on top of a weeds. They will take it as encouragement, and will grow all the more strongly.

Then, having cleared out all unwanted growth, we simply spread a good thick layer of leaf mold onto the bed, all around the plants.

My technique is to "bowl" a double handful of the mulch, across the plants, rather than dropping it straight down on them from above. If you just drop the mulch, it tends to flatten the plants. This is not good. If you "bowl" it sideways, then it goes around the foliage without crushing it.

This does mean that you need to work your way along the bed, in order to get the mulch all the way around the plants: you can't just stand in one place and shovel it out of the barrow. But it means that you get good coverage, nice and even, and the mulch goes a lot further, too.

That last point doesn't matter if you have huge builder bags of the mulch available (as we do, with our leaf mold), but if  you are using expensive bought-in chipped bark, then it's good to make the best use of it, by spreading it evenly.

Simple, quick, easy, and it really perks up the appearance of a winter bed.

There, that's the left-hand bed done: now we just repeat the process for the other one. 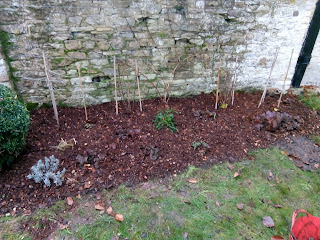 Once we'd finished this one - right -  we looked again at the support canes: this is one of the gardeners' ongoing internal debates - do we remove plant supports over winter, or leave them in place?

As always, with gardening, there is no right or wrong answer, you have to use your intelligence and pick the most appropriate course of action, depending on the circumstances.

In this case, we initially thought we'd leave the canes in place to protect the Lilies from being trampled on by the dogs (little tinkers!), but on reflection, we decided that the plants were safe and sound below the ground, so there wasn't any need to leave the canes in place. We would replace them in spring, as soon as the Lilies start to sprout, and in the meantime, the garden would look better without them.

Actually, there's another good reason for removing them: my notes tell me that the Lilies grew too tall for the canes, this year, so next year we will need to use longer canes. Definitely no point leaving the too-short ones in place, then!

So there you go, a quick easy job which refreshes the appearance of the beds, and protects the soil over the winter. Over time, our leaf mold mulch will be absorbed by the soil, and will work its magic to further improve the soil quality and texture: at which point we will, no doubt, add another three barrow-fulls!