Ferns - How to tidy them up for winter

Winter really seems to have arrived this year, and it's only the first of December: we've had heavy frost here for the last week, and all those plants that were bravely - and wrongly - flowering out of season will now be suffering the consequences.

There are still jobs to be done in the garden, and one of those is to cut back the ferns that are now looking sad and battered.

Some years, they retain good colour and some springiness in their foliage right through to March, but this year they seem to be going brown and lying down very early, which gives us a nice winter job to do. 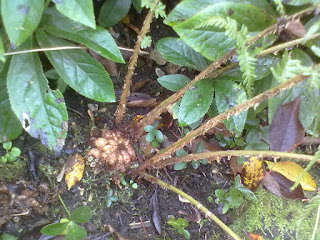 Here's one I did last week, half done to show you Before and  After in one go: you can see the tight, shiny "knot" of new fronds in the centre, and you can see that, on one  half,  I have cut the old stalks down so tight to the base that you can't even see where they were. 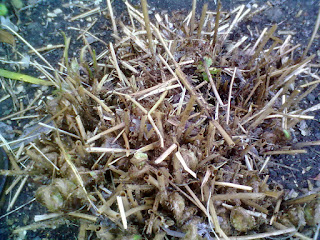 Horrible, eh? This is what it looked like in late April, and the owner had been looking at it, like this, all winter long.

But they were not alone, a lot of  people make this mistake, when cutting back non-evergreen ferns; they chop off the old fronds a couple of inches above the base, in the mistaken belief that they are being kind to the plants by leaving them a bit of frost protection.

Not so!  Well, unless you live in the very north of the country, or on a very exposed hill-top or coast, but even then, ferns don't need it, they are fully hardy and can cope with whatever the UK throws at them.

Also, if you leave a fringe of dead stalks like this,  you are creating a lovely "bug hotel" for overwintering slugs, snails, and other beasties. Now, this could he could be considered a good thing, if you are keen on preserving the wildlife, but personally I would rather leave them some piles of logs and branches around the far back edges of the garden, rather than encouraging them to hang around my beds and borders, not to mention how the dead bits don't really add to the beauty of the winter border.

Finally, and as far as I am concerned, this is the best reason: if you don't cut off the old stalks right down close to the base, then you can't see the wonder of the new fronds unfolding, next spring.  Have you ever looked closely at new fern fronds? They are amazing! And so many people miss them completely, because they either didn't cut back the ferns at all, or left a few inches of old stalks on them.

Oh, actually that's not "finally" at all - the real "finally" is that, come next spring, if you have left a length of old stalk, and you want to clear away the by-now nasty rotted stems, it is really fiddly and time-consuming to do it without damaging the new fronds.

Posted by Rachel the Gardener at 10:17 2 comments: