Garden School:
Teaching this week: Removing Hellebore leaves and trying not to tread on the daffs.

The reason I garden in gloves:

I am often asked why I garden in gloves.

"Surely part of the joy of gardening is to feel your hands in the soil..." they say.

Well, yes: and then I show them something like this: 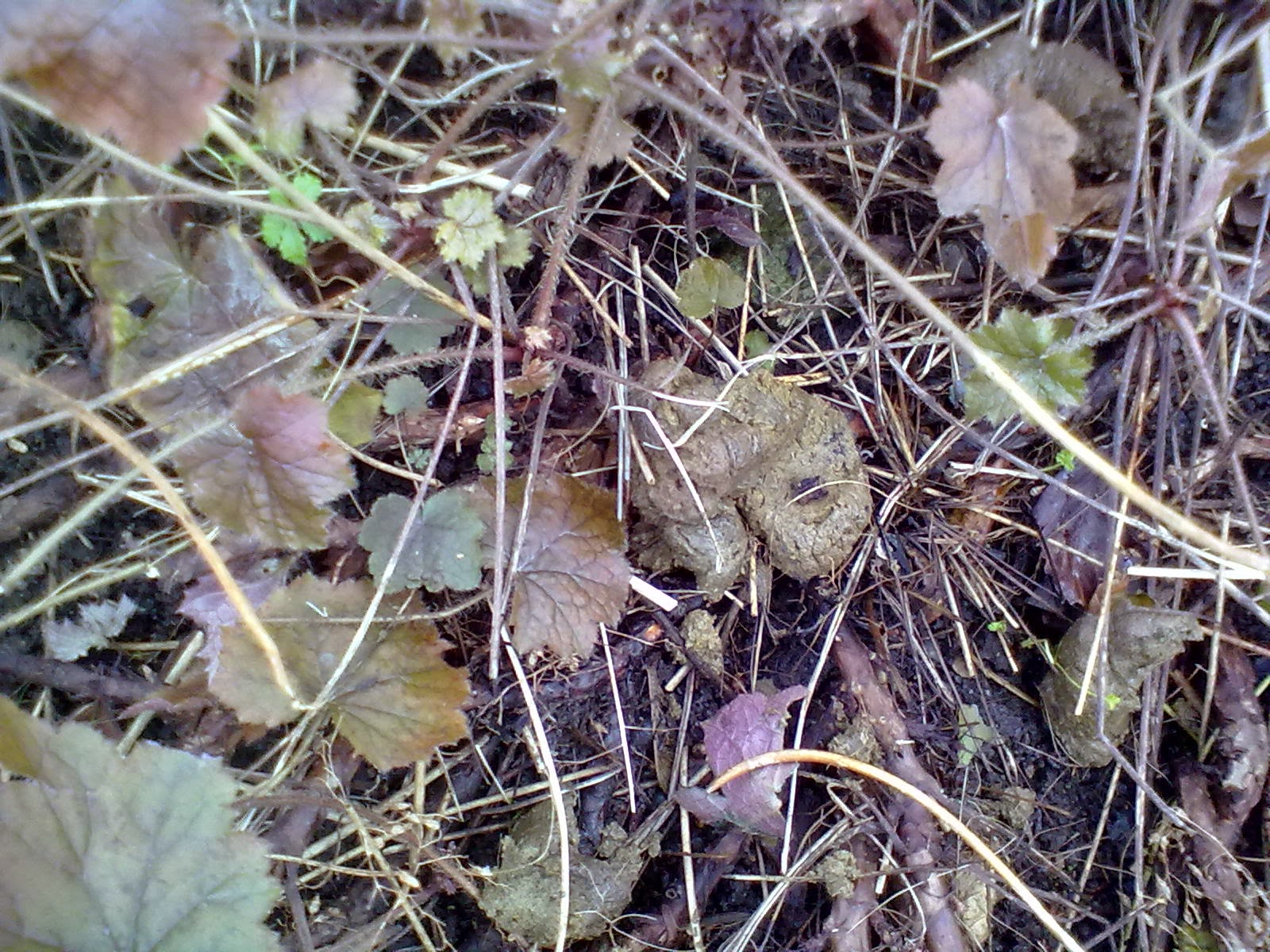 Yes, dear readers, it's a dog poo in the middle of a Heuchera.

Right in the middle of it.

Slap bang in the middle.

Just where I was about to trim off the old foliage, ready for the new growth of spring, which is just around the corner now.

And this is a fully enclosed garden, walls, gates or fences all the way round, and the Client does not have a dog.

But her daughter does.

And they came to visit the previous weekend, let the dog run around in the garden, and guess what, failed to pick up after it. There were two deposits on the lawn, this big squishy one (actually in three parts, but don't look too closely, it might upset you) on the Heuchera, plus another one under the Ceonothus.

So no, I don't garden bare handed!

Seriously, though, quite apart from the poo - and in an open garden there is always the possibility of passing wild animal poo, although somehow that is less offensive than dog poo, it's usually pelleted to a greater or lesser degree - there are nearly always quantities of broken glass, crockery, and sharp stones to be found when turning over soil, so even if a Client could guarantee a poo-free garden, I would still garden mostly in gloves.

In fact, I only normally garden bare-handed when I am potting up into fresh compost, or trying to pick out teeny tiny weedlings from between valued plants, where sometimes you just have to take the gloves off.

Oh, and when pruning roses. Yes, I get scratched to death, but somehow pruning roses in gloves just doesn't feel right!


Posted by Rachel the Gardener at 12:04 No comments:

Field Guide to Identifying Hellebores in the UK

Do you get confused as to which Hellebore is which? Can't remember which is the green-flowered one? Which, of the five types commonly found in gardens and hedgerows, are the poisonous ones?

You need one of the new Field Guides, now available on Amazon Kindle as an eBook. Here's the page - just go to Amazon's Kindle store and type in "field guide hellebores" and there it is. Click on the author's name to see the others available so far in the series - more are coming on line each day.

What's going on, I hear you say?

What's with this blatant advertising?

For the last few years I've been compiling Tables of Difference for various groups of plants and trees, to make it easier to identify the common ones. Botany is not hard to get into, you quickly learn to recognise, say a Willowherb.  The trick is in identifying which Willowherb, or whatever, it is.

This is where these little Field Guides come in: once you are confident enough to recognise that it's a Hellebore, you can save time wading through the in-depth botanical descriptions and merely take a quick look at the above Field Guide, which has all the salient information neatly laid out in a grid, so  you can quickly and easily check which characteristics your plant has.

Each month, for the first weekend of the month, there will be Field Guides offered for free download - not all of them, as Amazon restrict me as to how many "free" days each book is allowed to have, but I'll try to rotate the titles on offer, so you have a good chance of getting whichever ones you want for free.

They are only available electronically, and are published via Amazon's Kindle, but you can also download them to your PC or to other ebook readers, so it doesn't matter if you don't have a Kindle.

I hope you enjoy them!
Posted by Rachel the Gardener at 18:26 No comments:

The Boot and Shoot Ballet

I love this time of year - all the hard work at year end, to clear back the dead perennials, has been done, and we can see the skeleton of the garden: the shapes of the shrubs, the unexpected views, the strange uneven gaps... it's an interesting time of year, and a time when it's a good idea to take photos to remind yourself, later on, where those gaps were.

It's also about the time we start to see the bulbs coming up: I love the first daffodil sprouts of spring, and I already have some Eranthis hyamelis (Winter aconite but not poisonous) showing their pretty yellow faces to the sun. Not to forget the faithful snowdrops, of course, although I have to say that none of mine are flowering yet, but the Leucojum aestivum (Summer Snowflake, like a snowdrop on steroids) are already out, which is a bit odd.

This leads to an inelegant tip-toe style of gardening where you try to place your feet in such a way that you are not actually crushing the new shoots of bulbs etc, but without losing your balance and falling flat on your face, thus crushing a rather more substantial portion of the flower bed.

I think it was Helen Yemm who coined the phrase, I might be wrong.

There is never a "right" or a "wrong" time to take on a new garden, but personally I do like to meet a garden in late spring when the bulbs are already up, so I can see where they are before I start any digging or replanting. There's not much worse than carefully deciding, in mid-summer,  on just exactly the right place for a precious new plant, digging the hole for it: and discovering forkfuls of bulbs. Ok, thinking about it, discovering these bulbs by finding them impaled on the prongs of your fork, that's definitely worse.

So this week, and for the next few weeks, I am definitely doing the Boot and Shoot ballet!
Posted by Rachel the Gardener at 13:41 No comments: