An interesting start to the day: on a normal day I arrive, unlock the garden gate, walk over to the back door to collect my Notes for the day, then on to the Greenhouse to leave my work bag out of the way.

"Greenhouse" doesn't quite do it justice, it's practically a conservatory, being half-brick then real old-fashioned glass panes, all against a very old wall. It's beautifully fitted out inside, with staging on two sides, shelves underneath, storage for tools against the wall, and plenty of space.

Occasionally I have even found one of the house cats in there; presumably they had been sleeping, unseen, on a lower shelf when the client closed up the day before, and hadn't been noticed!

But today was different, there was a wren inside it.

Poor little thing, it went quite mad when I walked in: had I realised, I would have entered very slowly and quietly, but of course I had no idea until it started thudding against the glass at the far end, scaring me half to death in the process.

As usual, little birds are completely immune to "there, there, it's all right, calm down, let me sort you out" and they just flap around, hurting themselves and making me feel guilty. At least this one was flying freely, he wasn't caught up in anything, so I propped the door wide open, and very gently moved around him, herding him towards the door.

Out he flew, never to be seen again.
Posted by Rachel the Gardener at 09:45 No comments:

One of my clients has a beautiful Grade II listed summerhouse, the back of which is troubled by excessive ivy.

Periodically I am sent round to the back to pull the ivy off, a job which is at once hateful (I detest working with ivy as the dust makes me sneeze, I invariably get bits in my eyes, in my hair, and down my neck; it takes a long time to do a decent job, and the wretched stuff invariably grows back, so it always feels like a lot of effort for not much result) and satisfying, as I really, really dislike ivy, and take pleasure from pulling it down.

Every time I do it, I comment that without digging out the roots, it will just grow back again: but often there isn't the time to spend digging out roots, when there are a hundred more important jobs to get on with.

Last year, I resorted to cutting across the stems, pulling off as much as I could both upwards and downwards, then spraying the base with glyphosate.

Now, at this point I will digress into that urban myth that cutting ivy stems will not kill off the upper part, but that the ivy will somehow take moisture from the air and will continue to live.

I have done a significant amount of research into this subject, and I am happy to report that this is not true: ivy uses walls/trees etc for support, not for nutrition. The problem rises where the aerial roots find an alternative source of water, ie on the "other" side of the wall. In that case, if you cut it across lower down, the upper part can still find water and can re-grow a new root system.

This does not apply to modern houses - mostly to old houses with very soft mortar (and no cavity insulation), or to elderly outbuildings or garden walls made of just one layer of bricks, so that the aerial roots can go through to the other side, and find a source of water over there.

But on a modern building, if you chop across the stems at ground level, or at knee height, and remove a section of the stem completely, then the upper part will die.

It will, however, take 3-10 years to rot enough to fall down of its own accord...  the other urban myth, the one which says  "leave the upper part to die, it's easier to remove" is also untrue. The tiny aerial roots actually harden when they die, so they become even more work to remove. The best time to remove the upper part seems to be 2-3 weeks after cutting the stem - time enough for the plant to start to wilt, but not time for the tiny roots to start to harden.

So, going back the the one I did last year, before I learned about the hardening of the aerial roots: 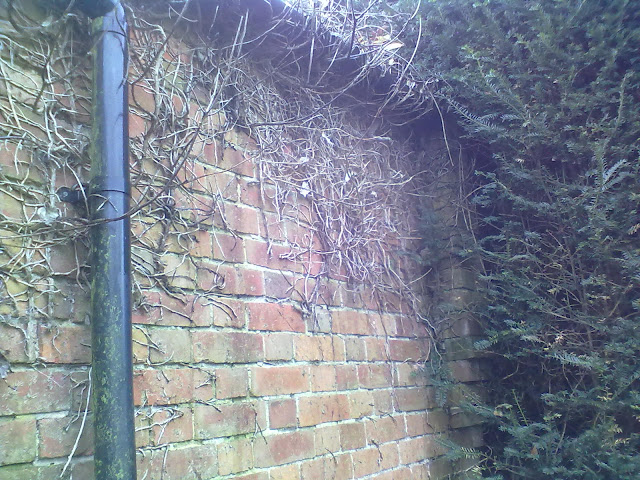 I chopped across at ground level, and pulled off as much as I could reach at the time. As you can see, the upper part is stubbornly still attached to the wall. 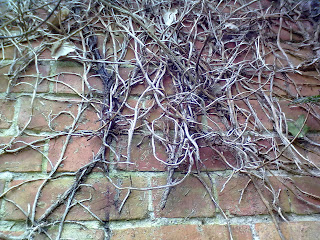 Here's a closer view of the dead stuff.

I had another go at pulling it down, and now the dead stems are brittle, so instead of being able to pull of great long streamers of it, it snaps off in short lengths, which is maddening.

At some point I am going to have to climb up and scrape it off.

So, if you have ivy growing on a wall, don't delay, chop it down NOW before it gets out of hand.

In fact, I think after ten years of professional gardening, I can't find any good reason to allow ivy to grow up walls. Not one single reason.  Grow something else! Grow roses, grow pyracantha, paint the wall, anything rather than grow ivy up it!!

Posted by Rachel the Gardener at 09:34 No comments:

After my researches into Dubbin appeared to say that it did not do anything to help waterproofing, I read a suggestion that Beeswax would do the trick.

So I took out my newest pair of work boots, still quite dry and clean, and applied two coats of beeswax, rubbing it in well,  and buffing to a slight shine on each coat.

All seemed to be going well, so I went out and spent the morning on longish wet grass. 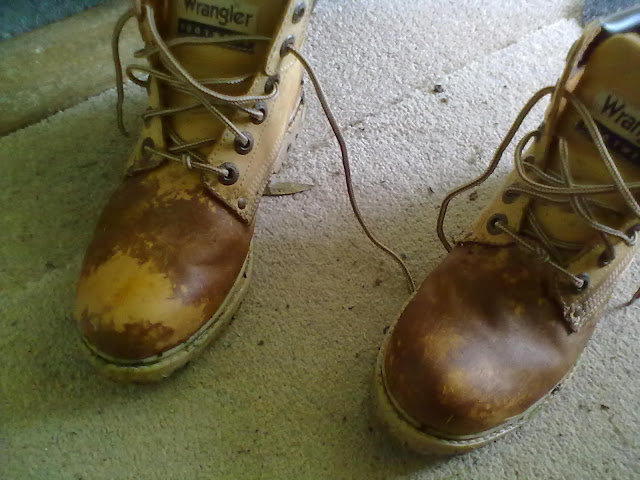 Oh dear, somewhat less than successful.  The right-hand boot (on the left in the picture) has a broad stripe of non-soaked leather across the top, but the rest of the toe area is quite damp.

It is clear from the photo below that the problem is worst where the boot bends. 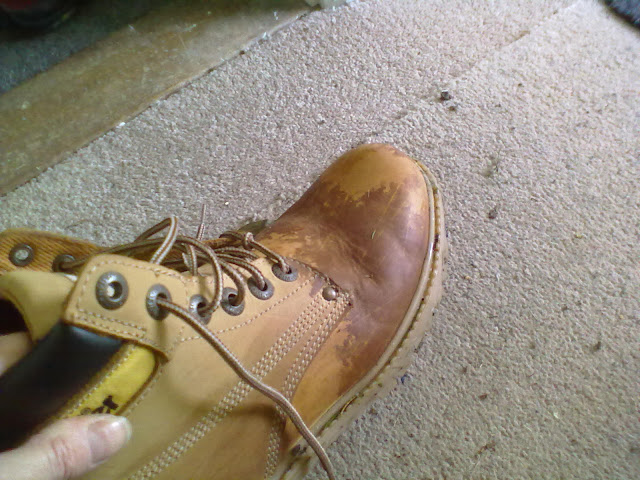 I have to say, they were lovely and soft, considering that they are virtually brand new.  But I am disappointed in the lack of waterproofing.

Just in case I didn't apply the beeswax sufficiently diligently, I left them to dry, then applied another coat or two: however, same result, wet socks after just a couple of hours.

So the score so far is:

Dubbin: rubbish, does not work.
Beeswax: lovely soft leather, does not work.
Vaseline: doesn't work, but makes boots very supple and at least is very cheap.
Nikwax: utterly useless, both the "leather" one and the "nubuck" one.

If anyone has any further suggestions, I would love to hear from you...
Posted by Rachel the Gardener at 08:15 4 comments:

*sniffle* I don't feel well!  All last week I had that uncomfortable feeling that I was going down with a cold: I had a couple of slightly headachey days, and a feeling that there was a large hole in the very centre of my head,  filled with cold air.

Do you ever get that feeling? As though the air is suddenly too cold on the (presumably) sinuses (I'm a botanist, not a medical student) which often means that a snotty head-cold is approaching.

But nothing came of it, I was fine over the weekend, and looking forward to getting some work done this week, if it would only stop raining every day.

This morning the barometer was actually rising, but all the foliage was sodden, so I had to cancel my morning job, although I had high hopes of going out this afternoon.  But I've been feeling more and more poorly as the morning passed, so maybe I'll stay in the warm this afternoon.

It's not just the missed income (no work = no money), it's the fact that I actually miss doing my job. I like weeding! I like pruning! I like discussing the possibilities, planning for the next season, making harsh decisions on what has to go... I like actually getting out there and working.

Maybe tomorrow....
Posted by Rachel the Gardener at 09:54 No comments: