“Make up your mind!”

“Make up your mind!”

So said a Client, to me, one fine day back in summer.

I'd been campaigning for two years or more to remove a stunted, ugly Holly bush which was permanently swamped by a Clematis, was routinely hacked back by the Client because it was overhanging the path, and which prickled me to death every time I tried to cut back the Clematis, or weed around it.

Finally, they agreed to let me remove the Holly, because the Clematis had died. (No, I didn't kill the Clematis, honest!) 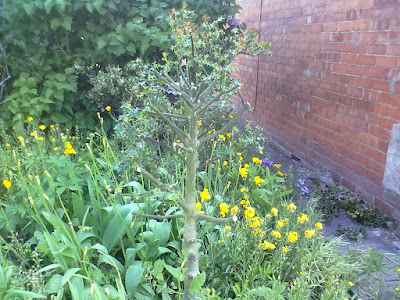 In order to dig out the dead Clematis, I removed all the holly stems up to 18” above the ground, to give me room to work, without being stabbed to death.

I then trimmed the remaining, top, stems, to just a few inches.

Again, so that I could work close to it, safely.

In case you're wondering why I didn't just cut it down to ground level, I always leave a stump, when working with trees, to make it easier for me to heave it out.

And in this case, I wanted to leave it looking at least halfway decent until I could finish the job, which would be at my next visit, so I cut it into a sort of Ultimate Hat-rack shape. 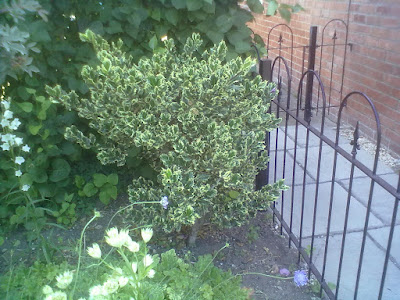 A month later, this had happened:

Yes! This brave little Holly had put out a lovely flush of new leaves on all those cut stems, and turned out to be rather prettily variegated.

And suddenly, rather shapely!

So I suggested that maybe we should keep it now, for no other reason than the replacement Clematis would take quite some time to grow big enough to cover the fence again.

And that was what sparked the remark - “Make your mind up!”

Which led on to the thought that actually, in gardens, we do not have to Make Our Minds Up and stick to it.

We are allowed to change our plans as we go, as passing seasons alter the view, as different times of day or year reveal new vistas and combinations; as we grow tired of a particular plant, or as we change our ideas on what we like.

As an example of this, one of my Clients had, when I first went there, whole beds full of roses. Ten years in, she decided she didn't like the roses any more, so they all had to go, and we planted Hydrangeas instead. (I say “we” but you know I mean “I”....) For another five years we had lovely Hydrangeas, and then last year: guess what? Yes, she decided that there were too many of them, so most of them had to go, being replaced with.... some new roses!

Gardening is, in fact, all about change.

Which is rather lovely, don't you think?

Posted by Rachel the Gardener at 07:30 No comments: