Ah, the holy grail of gardeners: all we want is a plant label that is permanent. And cheap.

Permanent as in "won't fade, will remain legible for months/years" and cheap as in "yes, we could get those lovely engraved plastic ones but they cost a fortune and I'm only labelling my seedlings here."

I've tried everything over the years: different types of felt pen, so-called permanent markers (they fade), laundry markers (supposedly washable with hot water and detergents, but can't cope with being outside), pull-the-string wax pencils (hard to write neatly and they fade, anyway) and pencil: pencil was the best, especially if you can get an old fashioned "soft" one marked 2B or, better, 4B  (resists urge to quote from Hamlet).

Soft pencil doesn't fade at all, and will last for years, so I thought they were going to be ideal - right up until the first time you try to wipe off the mud so you can read it, whereupon it smears all across the label and become totally illegible.

At least with pencil, you can rub it off and re-use the labels... but it's not permanent.

Last week I found these in Wilko, my local cheapy-shop: 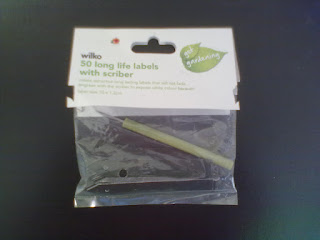 It says "create attractive long-lasting labels that will not fade, engrave with the scriber to expose the white colour beneath."

Ooh, ooh, excitement: at last, a cheap version of those expensive engraved ones. 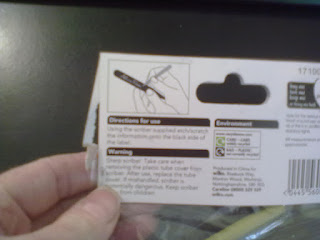 On the back it has an illustration of someone writing on the label in flowing, elegant italic script. 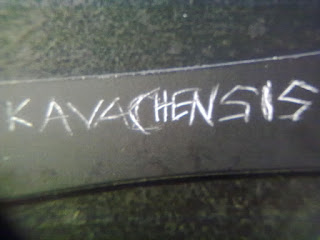 Here's my first attempt: Peony kavachensis, it's supposed to say.

I don't know what your standards of penmanship are, but to me this looks as though it were done by a five year old.

And it was really hard work! 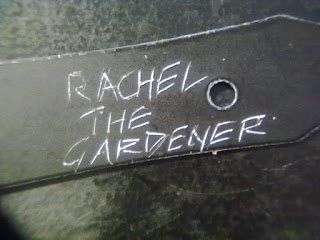 Here's my second attempt: using the far end of the same label, and writing in small letters to see if it was any easier, or any less amateur looking.

I sought advice from my PGG colleagues (Professional Gardeners' Guild): surely someone must have found a way to use them.

One said "try heating up the tip of the scriber" and that did make it easier to get through the black coating, but only for a couple of seconds, and it made a really, really fine line: and I want big bold clear easy-read lettering.

I tried using a stencil, but the smallest I could find was 10mm high, which is the full width of the label, so they didn't fit on the label - which is, I have to say, a bit on the mean and scrimpy side, size-wise.

Alas, that holy grail is still out of reach...and it's back to the pencil.

Posted by Rachel the Gardener at 09:34 7 comments:

Salix Kilmarnock: what to do with a very old one.

I've written several articles about this pretty, weeping tree, but here is a slightly different question regarding their pruning and maintenance.

A nice lady called Marie sent me photos of one which they had inherited: it was very old, and was lying down instead of standing up.

Bravely, they heaved it upright, knocked in a firm stake, and propped it up. Here's the result: 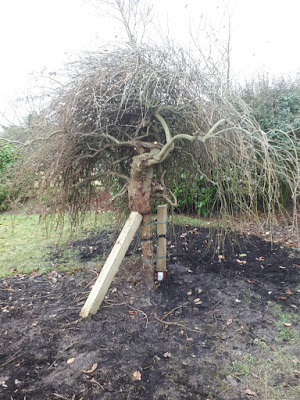 There are several points to mention: firstly, a lot of people ask me about the grafting point, and here's a perfect example, as you can very clearly see the graft - that's the big lumpy bit, just above the angled stake. That's where the weeping part has been grafted on to the upright non-weeping trunk, and it marks the point below which nothing must be allowed to grow.

This must be a very old one indeed - just look how thick and gnarly it is!

Secondly, I would normally faint with horror at the idea of knocking a metpost in quite so close to the trunk of a tree: usually, if you tried to do this you'd be unable to get a stake in the ground at all, as there would be roots all round the tree.

However, in this case there was the rotted remains of the original tree stake, which meant that Marie was able to hammer the metpost in to the old stake's rotting base: so there was already a vertical "tunnel"  in existence, which the tree roots would have grown around.  .

(In case you don't know what a metpost is, it's a metal square-section stake , with a hefty four-angled point which is well over two feet long: you hammer them into the ground (*faints with horror again*) then you add the wooden stake. Brilliant for fenceposts, as it saves having wood underground, which tends to rot. Not usually used for tree stakes, but when the devil drives....)

Right, back to the plot: point three: the prop. If you have to have a temporary prop such as this, it's a good idea to pad the trunk of the tree with some fabric, to reduce damage to the bark. No matter how firm the stake, the tree will move slightly in the wind, and will rub across the top of that prop. So a bit of padding will reduce the damage. I use old dishcloths, or towels: something fairly thick and squidgy, and preferably something cotton. And, of course, remove the prop as soon as it is no longer needed.

Four: the actual ties around the stake. They will need to be tight, as they are holding up the whole weight of the tree: this is good, as it means they won't be rubbing the bark. On the other hand, you will need to check them every month or so to ensure that they are not too tight. It's easy to forget about them, and two years later you find that the trunk has tried to expand, and now bulges above and below in muffin-top fashion. This is very bad for the tree! So - and this applies to EVERY tree you have which is staked - it's important to periodically go round and check that the ties are not cutting in.

Usually at this point I feel compelled to mention the importance of having a separator between the stake and the trunk, to ensure that they are not rubbing together: but in this case the tree is leaning heavily away from the stake, so that's not a problem! Also, there is a twist in the tie, which is perfect, as it works as a buffer, and also creates a little slack in the tie to allow for a bit of expansion.

Fifthly (still not sure if that is a real word or not) I should mention that there is an inherent danger in trying to straighten a leaning tree: there is a very real risk of damaging the roots. Half of them are going to be bent at a sudden angle, and the other  half are going to be ripped out of the ground, in order to get the trunk upright again. Sometimes this is fatal, sometimes not so much: if the straightened tree is very firmly staked, and the loose earth well pressed down, then the roots will often be able to recover from the shock, and it will re-root in the new position. Fingers crossed for this one: it was done a month ago and it's showing signs of buds, so that means "so far, so good".

Next, Marie asks how to prune the canopy to get it back to looking lovely again. 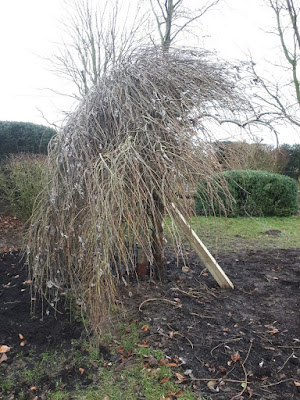 As you can see, now that it's upright, the canopy is extremely lop-sided, so it is going to need a fair bit of work.

The first thing to do is to remove as much of the dead wood as you can.

How to know which bits are dead? They will be grey and hard, rather than any shade of browny-green, and will be slightly soft to the thumbnail. Dead wood won't have any buds at all - so if you are not totally confident of your ability to tell the difference, wait a couple of weeks until the buds begin to break open.

Once you can see that some of the branches have buds visibly opening, it's easy to find the ones with no buds at all, and remove those ones. Start at the tip, and follow the branch back and back and back until you find some buds: if there are none, then you will follow it right back to the trunk, and that is the point at which you cut it off.

There is no point leaving dead wood on a tree: it will rot, and may lead infection into the rest of the tree.

Having removed all the definitely dead material, it's then time to step back, take a look at the overall shape and decide how best to make it even.

As described in detail in the other articles, this is normally done by crawling underneath it to remove inner wood, leaving the outside - which is the most actively growing material - to form the canopy.

In this case, at least the owners won't have to crawl on hands and knees!

I would certainly want to get all the smaller branches well clear of the ground, and in this case that will mean taking a fairly drastic amount off the "downhill" side. Don't just chop across like a pudding-bowl haircut, take the time to remove individual branches, leaving the shorter, fresher ones.

We are aiming for a "light, airy waterfall",  so although it might seem a bit drastic to remove a lot of the wood, it will soon grow back: all Willows are famous for their speed of growth.

And by reducing the lop-sided mop, it will take a lot of weight off the trunk, which will help the roots to stabilise, and will thus mean that the ugly diagonal prop can be removed as soon as possible. (If it were mine, I'd paint that prop dark brown, or at least smear it with mud, just to reduce the impact of it.) 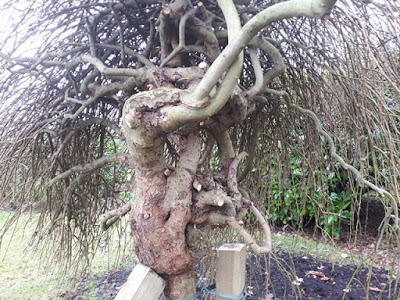 Is it possible to see a bit of almost Bonsai-like oriental grace in those twisty stems?

It's certainly an unusual view!

So, having cut off the dead stuff,  shortened the over-long ones, thinned out the remainder, what is left to do?

Answer, give it a good fistful of food - a balanced food such as Growmore, or a watering-can full of  seaweed feed, or fish, blood and bone - and a good drenching.

Continue to water it twice a week from now until mid summer, even if it rains, and feed it once a fortnight or so.

Hopefully, it will be invigorated and will put out a good flush of new growth: and Marie, do please send me a photo of it in mid-summer, I would love to see how it performs!