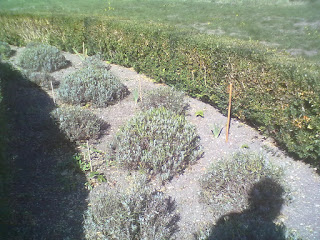 Posted by Rachel the Gardener at 10:51 No comments:

White worms in the compost

I had a question from Terese, in the small hours of this morning: she asked about small white worms which had found their way, uninvited, into her compost heap.

The questions were, are they baby brandlings, and will they do the compost any harm.

Firstly, no - they are not baby brandlings. Brandlings are red from the word go, they start off as tiny red things and then become larger red things.

The small skinny white worms are Pot worm, or potworms, proper name Enchytraeidae. I have no idea how that is pronounced - I'd go for Enky-try-eye-day, I think. They are a group of worms who like things really, really wet, and with a very low pH, ie an acidic environment.

A good compost heap will have a more-or-less neutral pH, and will be good and moist but not soggy. So you can see that if the potworms move in, the brandlings have probably already moved out.

The good news, and the answer to the second question, is that the potworms do the same job as the brandlings - they will scoff the organic matter, then poo it out, thus creating compost. The “bad” news, if you can call it that, is that the compost they produce is going to be rather more acidic than neutral, which might not suit your plants.

Although, as you are apparently adding a lot of low-pH material to your compost, your garden is probably quite a low-pH one anyway!

So if your compost contains lots of tiny white, semi-translucent worms, you now know that they are potworms, and it's an indication that your compost heap is a bit too wet, and a bit too low in pH.

If you want the brandlings back, it's quite simple - you need to change the conditions of your compost heap, by drying it out a little, and raising the pH.

To dry out the compost, you can add dry, crunchy material such as flower stems, dried-out strimmed long grass, or shredded paper, stirring them well in: and you can cover the heap from rain and dew for a few days, taking the cover off when the sun is out.

Then, to raise the pH, the standard remedies include adding wood ash and stirring it well in - which will also help with the soggyness problem, by aerating the material - or finely crushed eggshells.

The final suggestion - and this is not my own, this one comes from the internet, so no guarantees! - is to soak a slice of break in milk and plop it down on top of the heap. After a few days, it will apparently be colonised by the potworms, and you can then remove it and either dispose of it, or bury it in the garden somewhere. This will drastically reduce their population so, along with changing the conditions of the heap, this should break their cycle of dominance.

So now you know! Red worms, white worms, all worms are good, and they also act as an indicator to tell us something about the composition of our compost.
Posted by Rachel the Gardener at 08:43 3 comments: