Herringbone Block Paving: who invented this, a sadist?

Not anyone who ever has to weed it, that's for sure!

In case you've missed this phenomenon, or in case you are thinking of having some laid, block paving is used when you don't want a boring concrete drive, and can afford to have something a bit posher.

It's made using paviours or pavers, which are like a slightly undersized house brick but without the "frog" or hollow on the bottom. They are laid on a bed of compacted sand (usually), and are set very close together. They are not concreted in place, so this method allows a certain amount of excess water to drain away, hip hip hooray. (Although still not a good idea if your drive slopes downwards towards the house...)

The advantage of a block paved drive over a solid concrete one, as well as the drainage, is that they can conform to changes in level, and they look nice. Very nice.

The disadvantage, from the viewpoint of the gardener or houseowner who has to maintain them, is that teeny tiny weeds can force themselves down between the blocks, so then they have to be weeded. 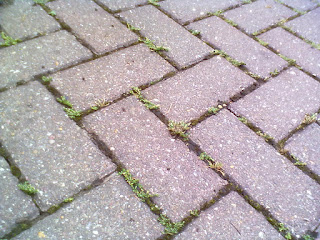 This - left - is a pretty typical herringbone block paving section, very much in need of weeding.

As you can see, debris has filled up all the joints, and now the weeds are rooting themselves down. If you leave them, they get bigger and bigger to the point where they start to lift the paviours, which is disastrous!

Up until that point, it looks lovely: much, much better than a solid concrete driveway - and not just in looks, but in water drainage - and ok, it's nice to walk on.... but once it need weeding, well, is that such a big problem?

If it were all in nice straight long lines - well, it would be tedious, but not really a problem.

But who invented the herringbone pattern?

What sort of demented sadist invented that dratted herringbone pattern!!!

Why does this stir me to such vitriol?  Well, I have the joy of maintaining a biggish stretch of block paving for one of my Clients, and the other morning I noticed with horror that the section just in front of the door was all covered in weeds again, so I had to get out the long-handled wire brush and scrub it clean: moss holds the moisture and can make it very slippery, and I don't want my ladies having accidents!

And this is where the sadism comes into it: herringbone pattern has to be THE most annoying pattern to clean, because you can only ever do tiny bits at a time.

Not so with block paving: you can't build up a good rhythm, or getting any real vim behind it, because the most you can do is two blocks-lengths at a time. And then you have to go back and do the ones at right angles... all the while trying to avoid treading on the loose globs of mud and weed which you have already dislodged.... 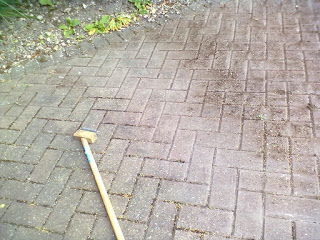 Here we are with the long-handled wire brush, tediously scrubbing one way, then the other.

You can see which bit I've done, can't you?! 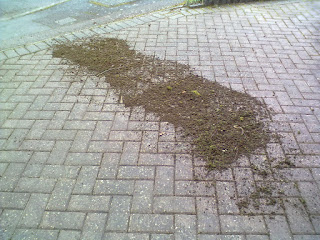 Here we are a little while later, sweeping up all the loose debris into piles.

It's worth doing this every so often, to avoid that business of treading it all back in again.

"But," I hear you say, "you can just spray it with weedkiller, can't you?"

Well, yes, you can: but, just as with shingle, stone slabs and most other hard surfaces, if you spray the weeds then yes, they die, but you have to look at dead and dying stuff for a fortnight: nine times out of ten the dead stuff looks so hideous that you tell your gardener to pull them out anyway, so they might as well have done it the first time: you're using heinously horrible chemicals in a not-strictly-necessary situation, and - my personal favourite - by leaving weeds etc to die, they are just rotting down and adding to the matrix of soil and debris in which the next generation of weeds will root themselves.

So no, weedkiller is not usually the answer.

Instead I have to get out there and scrub the darned stuff. 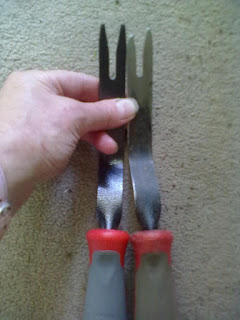 I'm still in two minds as to whether it's best to do it old school back-breaking bend-over styley, with a daisy grubber: it does an excellent job but breaks your back, not to mention that it wears out the prongs, as you can see in this comparison photo, left.

..or to use the long-handled wire brush and do it standing up, which saves the back enormously, but kills your back muscles from all that intensive scrubbing action. 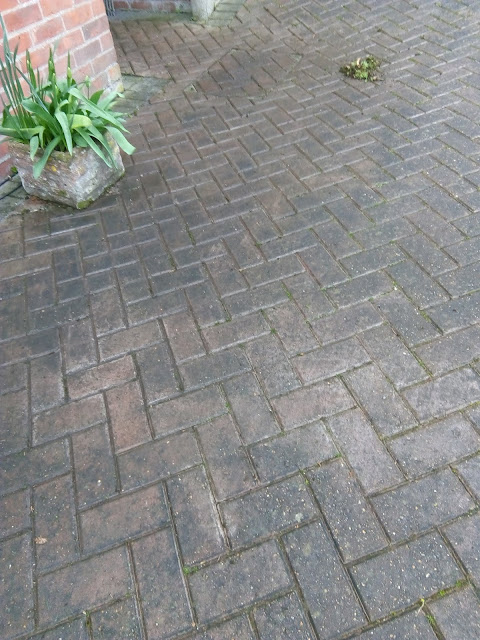 Either way, the finished result - right - is well worth the effort, not least because then everyone else in the street has to get out there and clean theirs, mwaah haa haaaa!

Posted by Rachel the Gardener at 11:57 4 comments:

Saving water - is it really worth it?

Like all of us, I've been absorbing for years the maxims around saving water: it's a scarce resource, reduce-reuse-recycle, rainwater is better for the plants etc etc.

So I've spent a lot of time, and a fair amount of money, installing water butts and devising water-saving devices in my garden.

Indoors, I'm pretty frugal with water anyway: I only ever use the short 15-minute cycle on the washing machine (it takes 22 minutes, I've timed it, but heyho); when I ask for hot water, my combi boiler takes 25-30 seconds to get the hot water all the way down to the tap, so I catch that otherwise wasted water (easily 4 litres, shocking!) in 2-litre milk cartons with the tops cut off for easy filling, then use it to water house plants, rinse off the sink, rinse out packaging prior to putting in the recycle bin, and so on.

I did, for a while, try the practice of not flushing the loo unless there were solids involved ("if it's yellow, let it mellow: if it's brown, flush it down") but I found that, here in this hard water area, the loo would quickly start looking stained and disreputable, so I gave up on that.

But outdoors, I use a lot of water, as I have a lot of plants to look after, and small plants in small pots need to be watered.

Why am I bringing  this up now?

Well, I have a water meter, as any sensible person would do. I say that, because I pay on average £140-160 per year, split over two bills. A friend two streets away, who has the same size household as me but does not have a million plants in pots to water every day, does not have a water meter, and pays over £700 per year. That's a whopping difference. Especially considering how much water I pour onto my plants!!

My bill for the summer half-year is usually about 15 or 16 units of water, and it costs me about £70-85: the amount doesn't seem to bear any relation to the actual amount of water used, as most of the charge is the standing charge, which they make as deliberately confusing as possibly by a) splitting it up into standing charge for fresh water, and then a different standing charge for wastewater: and b) by invariably changing their prices mid-way through the billing period, so you get four or more lines of pricing...

This recent bill arrived, and I was interested to see if it showed any reduction, as I have installed water-catchers under my plant benches, so I can re-use the water that would otherwise just fall between and through the pots: and I now have six water butts, some of them with taps, some of them with hoses attached, so I can use as much rainwater as possible. I wondered if all these measures would be reflected in my water usage.

Well, hooray and cheers, this time I only used  6 units of water. Six!! Massive reduction! I'm so proud!

How much do you think the bill was, though.

All that effort, all those water butts bought (and they're not cheap), all that staggering about carrying them out to the car (flaming awkward things to handle, I can tell you!): all that building of stout wooden stands to get them high enough that I can use the syphon principle to water my plants - and how much did I save? A fiver.

I more than HALVED my water usage, and saved five quid!!

No wonder most people don't bother...

Of course, I have the  pleasure of knowing that I have Done My Bit, I've massively reduced how much expensive treated water I use, and my plants are enjoying the nice fresh rainwater instead of the horrible chlorinated stuff.

So saving the planet I may be - but saving money I am not!
Posted by Rachel the Gardener at 11:16 No comments:

How To... Clear the Meadow Path

This is not so much a "how to" article as a "hey, look at my great scythe!" sort of article.

This dates back to early June, when a Client sent me an impassioned plea - "we can't get into the meadow any more, help!" so I grabbed my scythe and went round to see what was going on. 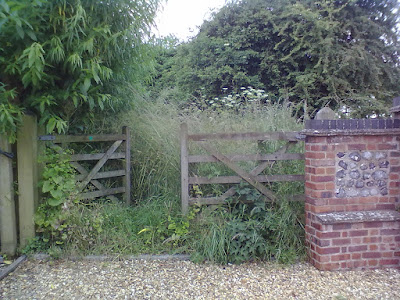 Oh dear, I see the problem. 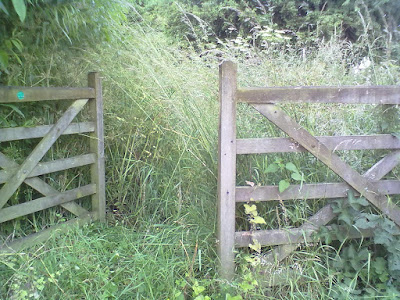 Yes, it's a bit hard to get in through the gate, isn't it?

And the grass is rather too long for the mower, isn't it?!

Luckily, the scythe is quite literally designed for this situation, as it loves long grass, it loves cutting wet grass, and with a bit of practise, it's easy to manoeuvre it around narrow entrances and odd corners. 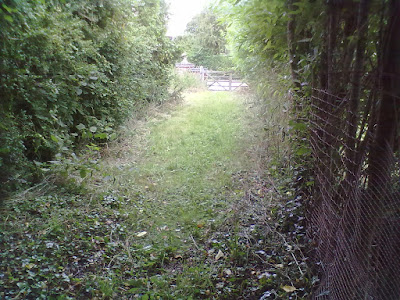 And there it is, done.

OK, I didn't show you the huge piles of cut grass which I had to laboriously rake up and cart off to the compost bins (which were then somewhat overflowing, oops), nor did I mention the three times I had to stop and make conversation with neighbours, passers-by etc.

It's an odd thing, you know, but when I had a petrol strimmer, not one person ever, EVER, stopped me for a conversation while I was using it.

Now, every time I get my scythe out, people stop to ask questions.

Which makes a mockery of the question "is a scythe faster or slower than a strimmer?"
Posted by Rachel the Gardener at 08:58 No comments: