Dead Dog Rose: can anything be done?

Today I received this rather alarming picture: 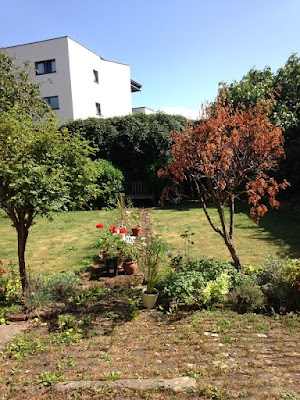 along with the question, can anything be done to retrieve an apparently dead Dog Rose?

The worried owner had been away for the past few weeks, and came back to find this waiting for them - oh dear!

Well, bearing in mind that I haven't seen the plant in question, and that I am working entirely from this one photo, the most likely reason for this catastrophe is lack of water - although it has not been a hot summer, it's been very windy, and wind is very drying.

It would seem unlikely that one of a pair of more-or-less standard Dog Roses could die of an infection while the other remains perfectly healthy, so I have to assume that it's a simple case of Death By Dessication.

In this case, the obvious thing to do is to rip out the dead one and replace it, (or, to take the opportunity to plant something different): however, as you can see, it is one of a matching pair, plus there is the question of Rose Replant Sickness.

So what would I suggest?

Well, in most cases, I would suggest giving the "dead" plant one last chance.

Firstly, I would suggest carefully removing all the dead foliage - depending on how long it's been brown, you may find that shaking it is enough, or you might have to comb through it with gloved hands.

Rake up and discard all the dead material (don't compost it, just in case), then water the dead rose. Water it slowly and gently - a watering can is often better than a hose for this job - and keep going until the water sits on the surface. Repeat this gentle drenching every evening and every morning for a week or so. If you are lucky, there might be signs of revival - if you are very lucky, new buds might appear all along the stems, which would mean that the whole plant would recover. If you are lucky, but not THAT lucky, the upper part might be a goner, but new shoots might appear from ground level, in which case it will look somewhat unbalanced for a year or so, but will eventually recover.

If no new shoots appear, and no new buds appear, then we will have to accept that this plant has, as they say, shuffle off this mortal coil, and will have to be replaced.

The problem with replacing roses is that of Rose Replant Sickness, a problem which makes it very hard to establish a new Rose in a place where another Rose has previously grown, or particularly, has died: the theory is that over time, soil-borne pathogens build up to a level which will kill (or fatally weaken) any new Rose.

Some sources suggest that this build-up of pathogens will only kill small plants, whereas the older plants are more able to tolerate the build-up: but what about all those Rose borders, where the same plants have been growing for decades, perfectly healthily? The problem is not yet fully understood, but it is definitely a real phenomenon.

Information on the internet is contradictory, to say the least: but I think it is fair to say that all Roses, without exception, are "greedy feeders" and will have sucked all the "goodness" out of the ground, regardless of any pathogen level, making it harder for another plant to set up shop in the same position.
So whenever I am asked to do anything with Roses, the first rule is to dig a jolly big 'ole, and to replace most of the removed soil with a combination of fresh organic matter - well-rotted manure is good - along with a barrow-full of home-made compost, some leaf mold, some soil from another part of the garden, even some bought-in compost, although not too much - "multipurpose" compost is not very good stuff for using in the garden, it tends to dry out too easily, and it is so "light" in texture that it doesn't offer much support to growing plants.  Set aside a couple of bucketfuls of this "new" soil mixture.

(As an aside, I worked in a terrible garden for a few weeks, many years ago: the beds were created entirely with multipurpose compost which was just plonked, two-three feet deep, with no attempt to dig it in, at all. Everything the owner planted fell over. Or died of lack of water. End of aside.)

Having dug well (which includes, of course, removing all the roots of the previous Rose), add a couple of fistfuls of bonemeal, and dig that in as well, firm the whole lot down, and water it well to settle the soil.  Meanwhile, take your new Rose, and soak it well for a couple of hours before planting. Find a stout cardboard box that is big enough to take the rootball with ease, dig a hole large enough for the box, and plonk it in the 'ole. Water it well, (make sure to take off all plastic tape, labels, etc, and don't use a shiny one, use the plainest, matte brown one you can find) until it is good and soggy, then plant your new Rose inside the cardboard box, using the couple of bucket-fulls of "new" soil that you reserved earlier. Sounds daft, eh? The theory is that by the time the roots of the Rose have reached and penetrated the cardboard box, the plant is sufficiently well established to be able to resist the pathogens.

The latest trendy answer is, of course, to use beneficial mycorrhizal fungi, which can be bought by the sachet, and which might be provided by the Rose seller. Manufacturers claim that they solve the problem: personally I haven't carried out my own trial yet, so I'm sticking to the cardboard box method for now.

After planting, it goes without saying - but I shall say it, anyway - that the new Rose needs to be watered deeply and regularly, and will benefit from additional feeding, and to be honest I'd also recommend spraying it against black spot/fungus/bugs etc to give it the best possible chance of succeeding.

So there you go: when faced with a dead Rose, you can either rip it out straight away, or give it One More Chance....

Posted by Rachel the Gardener at 15:13 No comments:

Another Salix Kilmarnock question arrived in my in-box last week:   Trevor sent me this photo: 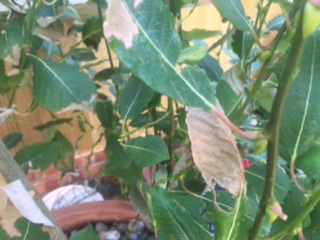 ...along with the obvious questions, ie what's wrong with my willow and why have the leaves turned brown?

I don't know whereabouts Trevor and his willow are, but if you are anywhere in the UK then the simplest answer is the obvious one: it hasn't rained for weeks, and they need more water.

One of those leaves looks as though it might have had a leaf-miner in it (see Bugs, later) but another has a brown tip, so on balance I think the problem here is lack of water.

Willows are very water-dependent trees: they soak up a lot of it, and when grown in a pot (and I think I can just about see the edge of the pot) it is easy for them to dry out, especially when it hasn't rained for several weeks.

Even though it has not been particularly hot, it's been windy, and wind is very drying. After all, that's why we still hang our washing out on the line, even in the middle of winter! It's the wind that dries them, more than the general temperature.

In all these cases, I would suggest firstly giving it a good soak, then adding some liquid feed to the water and giving it another good soak, and finally, keep watering it every day for a week or more, even if it is raining, and with luck it will recover.

Willow are remarkably resilient, and dropping leaves is, for them, a very easy way to cope with the first few weeks of drought: as soon as the rain returns - which means, in this case, Trevor and his watering can - they will produce a new flush of leaves.

Oh, and about the Bugs: check out this post on another Sad Looking Salix Kilmarnock, for details and more information about watering and feeding.

Trevor, I hope this helps!

Posted by Rachel the Gardener at 12:05 No comments: