Garden School:
Teaching this week: Removing Hellebore leaves and trying not to tread on the daffs.

Is your Pieris too pale?

I had an interesting photo sent to me last week - thanks to Lynne for sending it in *waves cheerfully*. Lynne is in Scotland *stands on tip-toe, waves again* and has three young Pieris shrubs, two of which are perfectly ok, but the third one is a poor, pale shadow of its former self. 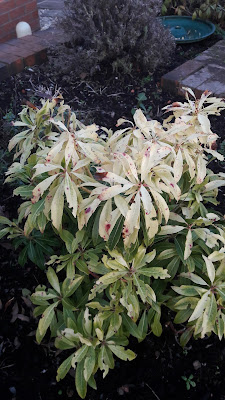 ...and oh dear, that is indeed looking a bit pale and pasty, not to mention the holes in the foliage!

As always, it's tricky doing diagnosis from photos, but there are a couple of points which can be made straight away.

Lynne tells me that the plants are in a semi-raised bed, with lots of good compost added to the underlying heavy clay of the area, whose climate is mild and moist.

Point one - Pieris are acid-loving plants, and often this whitening of the leaves is nothing more than a visible protest about the alkalinity of the soil. How to check? You can buy home ph soil tester kits, you just mix up a little of the soil and check the colour. If the ph is too high, you'll need to lower it. There are various ways to do this (just google "lowering soil ph for acid loving plants" or something similar) but the easiest might be to buy a tub of special ericaceous plant food and apply it. The garden centre will have a range of them - usually they are blue granules which you dissolve in water, which is very easy to apply.

Point two - Pieris don't actually like it too wet: they prefer to have occasional deep drenchings, and be allowed to almost dry out inbetween whiles.  A moist mild climate might be a bit of a problem for them, although a raised bed and improved soil goes a long way towards helping them. Digging in a couple of bucketfulls of grit before planting would help, if anyone out there is still at the planning stage...

Point three - they like it shady. I don't know if the bed is in direct sunlight all day, but Pieris are woodland shrubs, they prefer to be in semi-shade or dappled shade, so if by chance it is in the centre of the garden and gets blasted by the sun, it might be worth moving it to a more shady area. I feel this is a bit unlikely for this particular one, but it's worth mentioning.

Point four - Pieris occasionally suffer from something called root rot or crown rot: another problem associated with over-damp soils. The way to check this one is to dig up the plant and have a good look at the roots: if they are blackened and fragile, snapping off in your hands, then it's not worth persisting: throw away the plant, dig out an area a couple of inches bigger than the hole you just made, and throw away that soil as well - no point keeping infected soil, obviously.

Point five, the damage to the leaves - clearly something is eating them, which is not good. The holes are the wrong shape for leaf cutter bees, and don't look like slug/snail damage, but do look a bit like the notches you get from Vine Weevil adults. *spine-chilling chords on the organ in the background*

As Vine Weevil are a terrible pest, I would suggest that - just in case - it's worth digging up the plant and checking the rootball for grubs. Just google "vine weevil grubs" and look at images, if you don't already know what they look like. If you find any, then you have a problem: the grubs eat away at the roots of the plant, which could be causing the paleness, while the adults nosh the leaves, causing the visible damage, so you will have to get rid of the grubs by cleaning off all the soil from the roots (after shaking off as much as you can, dunk it in a bucket of water and shake it up and down vigorously a few times, until the roots are clean) and then you will have to catch the adults before they lay more eggs and re-infest it. This means dusk patrol with a torch, to catch and squish the little blighters. Hint: spreading some old sheet underneath the shrub during the day makes it easier to see things walking across to it, and if you shake the shrub, any adults clambering around the foliage will fall off onto the sheet, where you can see them and squish them.

So what would I do, if this were my shrub? First things first, I'd dig it up and check for vine weevil grubs (as the most likely eaters) and root rot. If the roots were fine, I'd replant it in a biggish pot, rather than back in the soil, and I'd buy a bag of ericaceous compost to do so, along with a tub of ericaceous food. I would reduce the height of the shrub by about half, cutting off all that pale, nibbled foliage, in the hopes that we'd get some strong new growth. I would site the pot in a fairly shade position, up on feet for good drainage, and I'd take care to only water it once a week.

If this regime worked, then I'd give it several months to recover before I considered planting it out in the garden again: it's perfectly possible to grow acid-lovers in normal soil, if you start them off in ericaceous soil, and add some more when you plant them out - and if you take care to give them ericaceous feed every week during the summer. Well, in a perfect world, it's better to only grow the plants that like the condition which you have, rather than trying to change your conditions, but hey! we're gardeners! And we like a challenge!

Hopefully by mid-summer, Lynne will be sending in a new photo of a rejuvenated Pieris, so fingers crossed for success!
Posted by Rachel the Gardener at 11:03 No comments:

We are well into winter, and although we haven't had much snow as yet, there may be some to come before we get back to spring.

Snow can damage our topiary - although so can high winds, boisterous dogs and footballs!  Although this post covers something which occurred back in the summer, it's a useful thing to know about, whatever time of year it is.

At one of my gardens, I am in charge of a lovely Cloud hedge, and one day found that one of the "clouds" had broken open.

Not a problem - all I did was ease it back into place, and - as you can see in the second photo - it was fine.

However, it kept happening, and I'm pretty sure it was the heavyweight pigeon landing on it (I've seen them do it) but I suppose it might have been  rough windy weather... well, for whatever reason, I couldn't let it continue as it would eventually damage the hedge.

I wired together the two main branches.

I'm not proud of it, but sometimes *sigh* a gardener just has to do these things. Here is the step-by-step procedure, in case you ever need to do something similar. 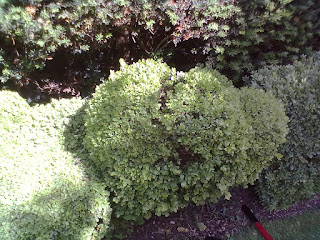 It's quite clear that there are two main branches within the head of this cloud, as the break always occurs in the same place. 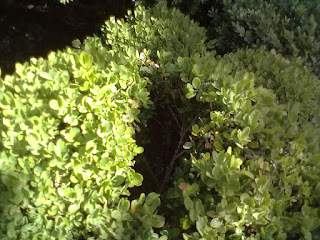 By gently pushing the crack open, I could see that there were indeed some quite big stems way down inside the cloud.

I found a short length of plastic-coated wire, green for maximum invisibility.

Or possibly, for minimum visibility. 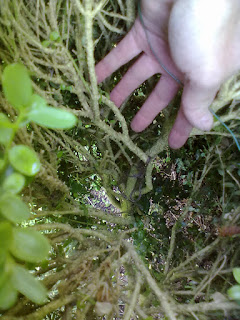 Here's my hand, carefully feeding the wire around one of the man branches, as low down inside the plant as I can get without damaging any of it. 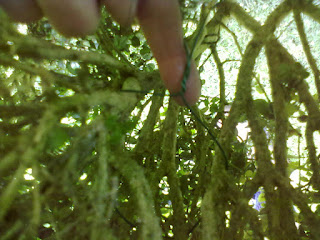 Having looped around the two main stems, I twisted the wire together at what seemed to be about the right gap: not so close that the shape of the cloud would be spoiled, but not so lax that the two halves would fall apart again. 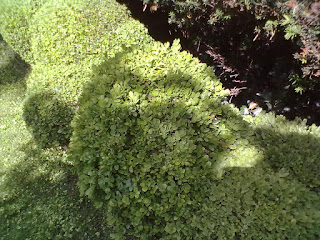 There you go, success.

No-one would ever know.

I've clipped it at least five times since then, and unless I knew about the wire, I would never know it was there, if you see what I mean.

So if your topiary starts to get a bit top-heavy, or is damaged by wind or critters, try this technique in the hopes of saving it!
Posted by Rachel the Gardener at 16:27 No comments: