Early last year, I started working with an Arborist, so now as well as gardening, consultation, teaching and writing, I do trees! *laughs*

We work on small to medium sized domestic trees, ie trees which are not much higher than the eaves of a normal house: we also do hedges. 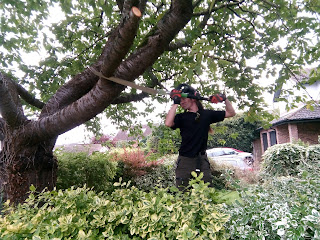 Our philosophy is to treat trees with respect: we prune them carefully, appropriately, and wherever possible we use hand tools, instead of reaching straight for the chainsaw.

When we need power tools, however, we use them: and most of ours are electric, so they are considerably quieter than stinky old petrol-powered ones, which is nicer for you and your neighbours, and - arguably - better for the environment. 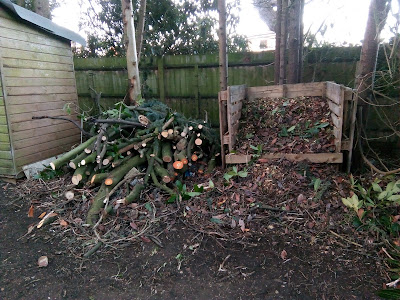 Debris from our work is put through our chipper - which is, of necessity, petrol-powered, and is a beast! -  and we leave you with a pile of useful wood chip, which is great for mulching the beds, absorbing mud on over-trodden grassy paths, or just leaving to rot down.

Branches too big to go through the chipper will be logged up, so that you can later use them for firewood, or you can stack longer lengths to create wildlife habitats. 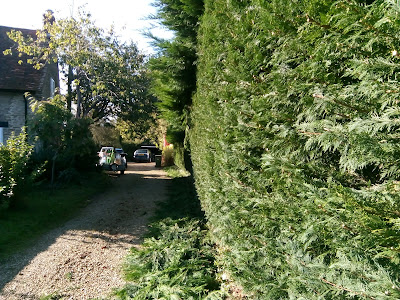 As for hedges, we are happy to tame your shaggy Conifer hedges.

Here's a worker's-eye view, twenty minutes into the job, showing how much growth is coming off.

Conifer chippings make a mulch which starts off bright green, but turns to brown after a couple of weeks.

Contrary to popular myth, it is not acidic, and can be spread around on beds and borders without harming the plants. 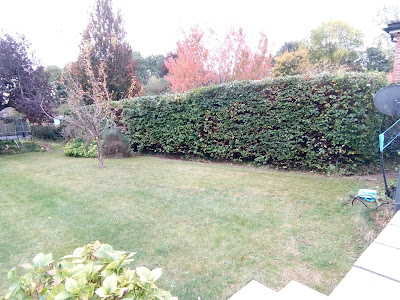 We also do a lot of mixed or native hedging, which we like to cut in a slightly looser fashion, to retain a more natural feel.

This one - right - needed reducing in height by a couple of metres, and pushing back to clear the shrubs, which it was threatening to eat.

Hedging and the Law: the Wildlife and Countryside Act 1981 states that it is against the law to "Intentionally take, damage or destroy the nest of any wild bird while it is in use or being built."

The everyday interpretation of this law is to say that it is best to avoid cutting hedges during the nesting season, which is roughly March/April to August, unless it can be stated truthfully that there are no birds nesting in the particular hedge to be cut.

We actually go a step further than this, and we refuse to cut a hedge at any time of year if it is known that there are birds nesting in it: furthermore, if we start cutting a hedge and discover active nests, we will stop the job.

So it is very important that you check for active nests, carefully and conscientiously, before engaging us to cut your hedge. 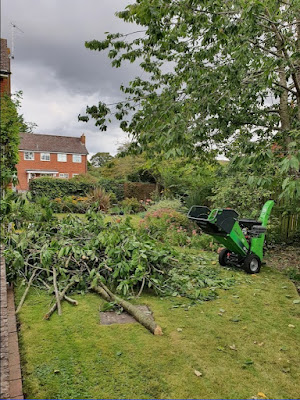 We have all our own equipment, and we pride ourselves on doing a FANTASTIC job of clearing up.

Here's one we did earlier, as they say, partway through the job, with a pile of boughs, branches and brushwood on the lawn:

We were about two-thirds of the way through chipping: this should give you an idea of the volume of material which can be created, even when doing a relatively small crown lift.

You can also see that in this case, we were putting the chippings straight onto the bed under the tree, where they would remain as a mulch.

This is about the most ecologically-friendly thing that can be done: the woodchip mulch suppresses weeds, it eventually returns nitrogen to the garden, and it means not having to transport it away, which otherwise incurs a cost for waste disposal. So it's cheaper for you!

And here we are, two hours later: 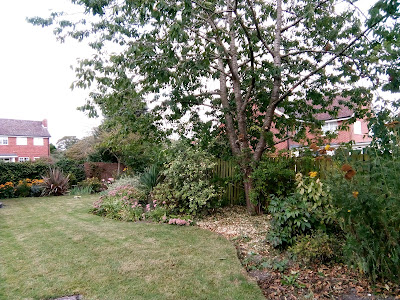 The chippings are spread around on the bed underneath  the tree.

Logs too big for the chipper were cut to length and stacked up for the owner to use for firewood next year: and all the mess has been cleared away.

"Blimey" said the Client, when they came out to inspect the work. "It looks as though you've never been here!"

Apart from the fact that the grass is no longer shaded out by the Cherry tree, the grass can be mown without having to duck under the low-hanging branches, and the planting underneath will now see the sun, for the first time in a couple of years!

Some people have concerns about using fresh wood chip on their gardens, and I have addressed this at length - as you would expect - in this article on the subject. But in brief, it's perfectly ok to use fresh woodchip, because it is a mulch, which sits on the surface of the soil: you don't dig it in, the way you do with compost or soil conditioner. It will help to suppress weeds, it will help to reduce soil erosion, it will preserve the nutrients in the soil - and it looks great!

Area covered: our Arborist activities are based west of the A34 at Oxford, in an oval covering the Cumnor, Botley, Boars Hill, and Wootton area. To email me: click on View My Complete Profile and use the link there, or email direct to Inquiries@rachel-the-gardener.co.uk. Thank you!

New comments are not allowed.