What's in a name... Bog Sage and Scabious

The other day, while weeding (with my mind, as usual, doing it's free-range thing), I got to thinking about how plant names influence what we buy.

As an example, there are a trio of what I call Perfume Shrubs: medium sized, deciduous flowering shrubs, lovely things, but you rarely find them in gardens because they have difficult names - Abelia, Deutzia and Kolkwitzia. None of them have nice, easy common names - well, apart from Kolkwitzia which, the internet suggests, is known as "Beauty Bush" but I've never heard anyone mention it, ask for it, or recognise it, by that name.

So, my theory (*clears throat repeatedly* "Brontosaurs: by Anne Elk") is that plants with nice-sounding, easy to spell, names, will sell better than those with 'difficult' names. 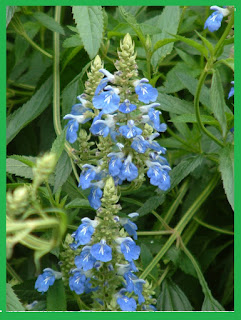 In support of this theory, one of my gardening friends recently put up a photo of a knee-high plant with very pretty blue flowers, which was eventually identified as being Salvia uliginosa, or Bog Sage.

I'd never heard of it!

Here it is - left: pretty little thing, isn't it?

But what a terrible name for a plant!

As if “Bog Sage” weren't bad enough, the species name does sound rather like Ugly-nose-er, don't you think? Would you buy a plant called Ugly Nose?

Certainly I'd never seen Bog Sage in any of “my” gardens, but the flowers are beautiful, and a lovely shade of blue: so I wondered if the ungainly name made it harder for the garden centres to sell it.

I often wonder if more gardens would contain the lovely flowering shrub Weigela, if it were easier to ask for - is it Vee-g'ler? Why-gee-lee-err? No-one knows...

Which led on to another thought - anyone else remember the Flower Fairies? I bet that if there is a Flower Fairy for Bog Sage, she's really fed up with the name, and probably gets together with the Scabious Fairy to drink cups of tea and grumble about how lucky the Nigella Fairy is.

Bog Sage Fairy: “Oh, it's all right for her (*wrinkles up nose*), little miss Love-in-a-Mist. She wouldn't be so cheerful if she were called Bog.”

Scabious Fairy: “Huh, too right. But what about me: I sound like a particularly nasty skin condition.”

Scabious Fairy: “I don't even HAVE another name! No-one likes me enough (sniffles) to give me a common name...”

Bog Sage Fairy: “Bloody Shakespeare - a rose by any other name would smell as sweet, he says. Well, that may be so, but people are not exactly rushing to buy (*spits the name out*) Bog Sage, are they?”

The sun sinks, as they consider the unfairness of their naming, and wish that Linnaeus had had the soul of a poet, or at least had had a book of nice-sounding names from which to pick....

Did you enjoy this article? Did you find it useful? Would you like me to answer your own, personal, gardening question? Become a Patron - just click here - and support me! Or use the Donate button for a one-off donation. If just 10% of my visitors gave me a pound a month, I'd be able to spend a lot more time answering all the questions!!
Posted by Rachel the Gardener at 09:53