Wild Mallow and Wild Geranium - how to tell the difference

This cropped up while my Trainee and I were weeding the Rose Knots the other day:  when learning to be a Professional Gardener, it's essential to know what is a weed, and what isn't, and there's quite a lot of skill involved in identifying early weed seedlings, so when I am feeling mean (*laughs*) I do what I call "point and shoot" where I point to one weed or plant after another, and my Trainee has to see if they can get the names right.

I do it because I just love the look of panic on their faces!

But it's a good way to keep reinforcing the identification, and it also illustrates how localised weeds are - once you start pointing at them, and naming them, you quickly realise that different parts of a garden can suffer from a different set of weeds.

More of this in a post to follow shortly, where we discuss how weeds  - and proper plants - move around without our help.

But for today, I was pointing out the small Wild Mallow seedlings, and my Trainee asked how I knew that they weren't Wild Geranium seedlings.

It was a good question! Both are common garden weeds, both of them produce rounded, or kidney-shaped leaves on long skinny stalks (pedicels), and both of them produce these early leaves in open rosettes: it takes a while for them to start creating the more upright flowering stems.

The answer lies in the shape of the leaf: here's some Wild Mallow: 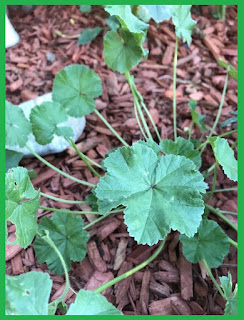 This one is Malva neglecta, or Dwarf Mallow: it's a common weed in sunny South Oxfordshire, but only in two of the four Rose Knot beds.

This photo doesn't have SFS (secateurs for scale) so you'll have to take  my word for it, that it's a small plant at this stage, and those thin wiry stalks - pedicels - are about that long (holds thumb and forefinger as far apart as they'll go) and the leaves are about an inch across or so.

The two wild Mallows you are likely to find in a southern UK garden are this one, or Malva sylvestris, which looks very similar at this stage.

Do  you need to know the difference between them?

Not really - if you are weeding a bed, then you don't want either of them.

Now we turn to Wild Geranium: 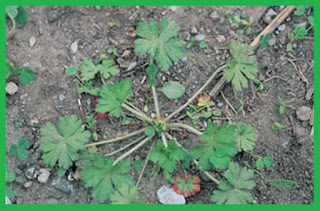 I'm not going to attempt to give a proper name for this one, as it could be one of several, and when learning how to be a gardener - as opposed to a botanist - you don't really need to know the exact species.

So for today, we'll call this one Geranium Unwantedii.

It's pretty much the same size as the wild Mallow, above.

As you can see, it has a very similar structure to the Wild Mallow: thin wiry pedicels (stalks) supporting small rounded leaves, all held in a rosette, springing from one central point.

But if you look at the leaves, you can see that they are deeply lobed. They look as though someone has taken a pair of scissors to them, and snip, snip, snipped. They are also softer, hairier, the stems are proportionally thicker, less wiry: but that sort of comparison only helps if you have both of them growing side by side.

So there you have it, in a nutshell: two similar-looking weeds, neither of which are wanted in our lovely Rose Knots.

Did you enjoy this article? Did you find it useful? Would you like me to answer your own, personal, gardening question? Become a Patron - just click here - and support me! Or use the Donate button for a one-off donation. If just 10% of my visitors gave me a pound a month, I'd be able to spend a lot more time answering all the questions!!
Posted by Rachel the Gardener at 09:13