Fungus on a Plum Tree: always a bad sign

Generally speaking, any fungus growing on a living tree is a cause for worry and distress: big, visible fungi are the fruiting bodies of types of fungus which live within a tree, "eating" dead wood.

Now, at this point, most people would think that if the tree is fully alive, and healthy, then there isn't any dead wood there - it's all alive. But actually, the central core of a tree, the heartwood, is kind of dead: all the metabolic activity is undertaken by the very outside layer of the tree - the bit just below the bark.

In fact, the vast majority of the bulk of  a tree is, technically, "dead"; only 1% of a mature tree is "alive", in the metabolic sense. All the hard work of transpiration, growth, etc is done by the leaves, the buds, the roots, and a thin layer of cells called the cambium, which lurks immediately inside the bark.

All the rest of the tree - the internal structure of wood - is just there as a sort of scaffolding, to hold the tree upright, and to present the leaves to the sun.

This means that if a tree is wounded, or damaged: either by natural means - storm winds breaking off a branch, perhaps - or by un-natural means (that would be us: pruning, chopping bits off, damaging the  bark by reversing the car into it, strimming too vigorously, banging nails into it etc), then a passageway is created through the living outside layer, into the "dead" inner areas, and fungus can get inside and start to spread.

Then, some time later, the external bits appear - the things we think of as "fungus", but which are actually a small part of the main fungus.

Here's a nasty but interesting case in one of "my" gardens: a mature Plum tree, forking at about breast height into two: growing in a rather congested border (I'm getting round to it, okay, give me time!), and which has produced less and less fruit over the past couple of years.  This year, it produced hardly any fruit at all, with a lot of visible dead wood in the upper areas.

In November, I had the time to take a close look at it, and realised that the front fork was completely dead, and that the back fork only looked leafy because it had bindweed growing right the way into it.

I cut off a few of the lower branches of the front fork, and yes, they were all completely dead. So I decided to start removing the tree, one bit at a time, over this coming winter.

First job, then, cut off the front fork. This was manageable by myself: but I might need help for the larger back one...

It was a fairly quick job to get the bulk of the fork down: I always like to nibble away at tree limbs, reducing both weight and bulk, before I chop off the main trunk.

Having safely taken off all the outside limbs - sorry, too busy to take photos - I got out the trusty bowsaw and lopped off the front fork's trunk. Surprise! Not quite dead! I cut it a bit lower, and a bit lower still, hoping to get back to clean, living wood, but alas, it was rotten all the way back to the fork.

Two weeks later, back in the same part of the garden, I was astonished to note the eruption of bracket fungus all over the sad truncated remainder of the front half of the trunk: 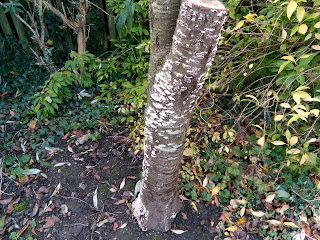 And the intriguing thing, to me, is the way that the line of fungus curls around the trunk: it's clear that the front fork, the one I cut off, is infected, but it looks as though that part of the tree does not run straight down to the ground, as "one" would expect, but twists around. 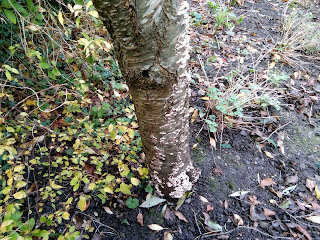 Here's the same trunk, from the other side, and you can see how the line of fungus slides around in a diagonal line.

I think this shows how trees don't necessarily grow straight up, the way we usually think they do.

Alas, it also shows that this entire tree is a goner, so I guess I will be chopping down the rest of it over the next few weeks. 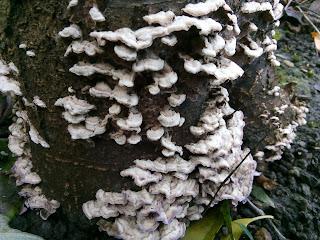 And here's a closer look at the fruiting bodies.

I'm afraid I can't find much beauty in fungus, as to me, they always represent the death of a tree.

It's a bit of a truism that fungal spores are all around us, but it's a fact: all gardens are full of the stuff, and yes that includes the hated Honey Fungus.

In fact, Honey Fungus spores have been found five miles high in the atmosphere! Five miles! So you can see that there's little point worrying too much about fungus in general, and Honey Fungus in particular, because the spores are quite literally everywhere.

Luckily, they don't have much of an effect on healthy plants and trees, so all we can do is strive to keep the plants in our care as strong, fit, and healthy as we can.

In the case of this poor fellow, his days are numbered, his time is up, and over the next few weeks I will be removing him completely.

Oh well, let's find a silver lining - once this part of the bed is no longer shaded by a large tree, perhaps I can clear it out, and replant it with something lovely!