Winter Jasmine: how to add some style

Artisan gardening again - how to do things just that little bit better.

Today, ("children...") we are looking at Jasminum nudiflorum or winter flowering jasmine.

It's a semi-evergreen, shrubby climber, which means that it will hold its leaves all through a mild winter, but will drop them if it's very cold: and it is what is known as "lax" ie a bit on the limp and floppy side.

It doesn't climb or cling to walls, in the same way that ivy, or Parthenocissus, or climbing Hydrangeas do: it needs the support of wires, or a trellis, and it needs to be trained around those supports, which means tying it in manually. If you don't tie it in, and if you don't prune it frequently, then the long sweeping branches will droop back down to soil level, and then you're in trouble, because it has an evil habit of tip layering: this is the process where the tip of a shoot, when it touches the ground, will instantly root itself. Handy, if you want to create a lot more plants - ie for sale, or for spreading to other parts of the garden - but a bit of a nuisance if you want to keep it under control.

But we all love it, of course, because the flowers are a lovely bright, clear, yellow, and it flowers right through autumn and into winter, when there isn't much else going on.

Incidentally, the species name gives you a bit of a clue as to what it looks like - it's Jasminum nudiflorum, so the "nudi" part means, well, naked: and "florum" refers to the flowers, so the name tells us that it flowers on naked stems, ie without leaves. And yes! It does indeed flower in the depths of winter, and usually, without there being any leaves.

So, what do we do with this plant?

If  you plant it next to a wall, fence or frame or some kind, it can be tied in to the support, which gives the impression that it is climbing: and I've known it get to well above head-height if treated in this way.

Usually, however, this is what you get: a limp, trailing thing, which tends to layer itself wherever the long rigid wands touch the earth. 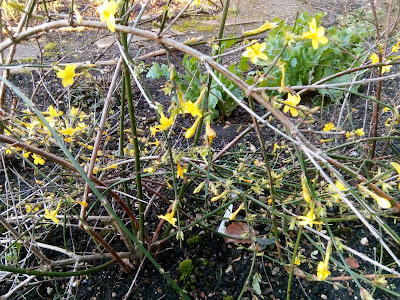 This was taken in December last year, 2019, when all else was pretty much dead, and this was the only spot of brightness in this corner of the garden.

So, I put on my Artisan Gardener hat, and decided to see if I could do something about it.

Hmm, what do we have, lying around the garden?

Oh look, a smallish metal obelisk, we used to grow sweet peas up it. Great! That'll do nicely!
I grabbed the obelisk, pushed it firmly into the ground over the above plant, then took all the long whippy branches and carefully drew them outside the obelisk, then eased them around it, in a general anti-clockwise direction.
Why anti-clockwise? No reason at all, the first few seemed to be lying that way, and once I'd started, well, I had to keep going! 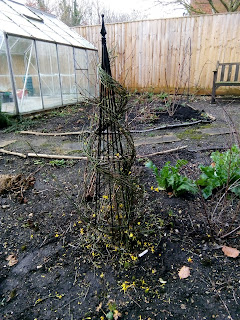 Here's what I ended up with - left.

A small obelisk, neatly clad in bare stems, looking slightly like a representation of the DNA double-helix.  Completely coincidental, I assure you.

This corner of the former vegetable plot is looking quite bare and uninteresting at this time of year, so a bit of height, and a bit of style, make all the difference.

All through the summer, it grew nicely, sprouting leaves, and covered the obelisk quite thickly.

I kept pruning it: remember what I said about the branches tip-layering? Long branches were wound around the structure, and anything shooting off in the wrong direction was firmly snipped. I don't think I've ever seen winter Jasmine being intentionally trained to be this small... so I thought it would be interesting to see how it grew, how much it grew, and whether it flowered, or not. 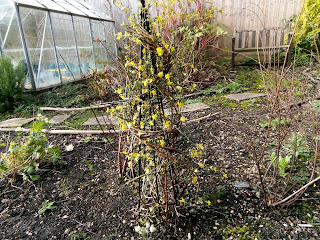 Here we are, as of this week: lo! and behold, we have flowers!

Not bad for the first year. I would expect to get more flowers in future years, as the covering becomes even thicker.

And all I have to do now, is keep on top of the pruning. That means giving it a harsh haircut next spring, and then, every so often through the summer, going over it to remove wayward shoots.

So now we have a bit of height, a splash of colour in winter, and an un-used obelisk is having a new lease of life!

Posted by Rachel the Gardener at 09:57