It's that time of year again... things are going brown and horrible looking, and potential new Clients start mentioning phrases like "putting the garden to bed for the winter".

Most of my regular gardens are, of course, well under control by now, *laughs* but occasionally I get side-tracked, and here's a deep border which which was well overdue for tidying.  My Trainee and I grabbed barrows, secateurs, and forks, and got to work: 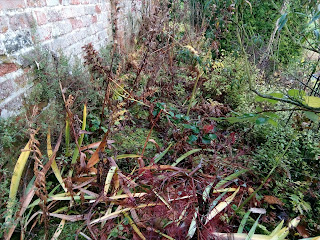 How many plants can  you identify? *laughs*

Nearest to me, there are bearded Iris, with dead foliage to lift away, and dying foliage to be trimmed neatly back.

There's actually a miniature Japanese Acer buried in amongst it all, and that needs to have a space cleared around it, and also needs any dead twigs to be carefully removed.

Then there's a mass of Acanthus spinosa, better known as Bear's Britches, or Ouch, What The Heck Was That? All the spiteful spiky seed pods can go straight to the bonfire heap: and for that matter, so can most of the foliage ... anything with spikes on it, is not welcome in my compost corner!

All odd brambles can now be located: I must have written a dozen articles on How To Get Rid Of Brambles by now, so I'll just say that we dug out every one that we could find, and there were quite a few of them.

Next up are a mass of Alchemilla mollis, lovely plant in it's place, and in my opinion, that place is definitely in the rubbish pile ha! ha! No, I admit there is a place for this rampant spreader, but in this bed, we have so much of it that it's become a weed, so out it goes.

Likewise for the Oregano, of which we have masses and masses. I made an executive decision a year ago, to remove all the excess Oregano, and we're still fighting it now. This could take some time. But out it comes, in huge sweet-smelling clumps, all destined for the bonfire pile. Well, no point trying to put it on the compost heap, as it's full of seeds.

Once we'd done all that lot, we could see where we were treading, and that allowed us to get closer to the wall, and able to carefully remove as much of the Pellitory-of-the-wall (proper name: Parietaria judaica, rolls off the tongue, doesn't it?) as we could reach. This weed is well named, because it will sneak into every crack and crevice in an old wall, thrust roots deep inside it, and then sprout enormous tufts of foliage, all covered with insignificant little brown flowers, which then release hundreds and hundreds of tiny seeds. So once you get it in a garden, you're going to be meeting it for evermore, it sometimes seems. 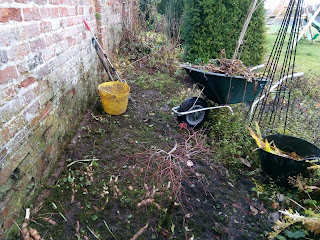 Here's the "after" photo from the same vantage spot - quite a difference, eh?!

Yes, I know it looks heartlessly bare, but that's not a bad thing.

We've cleared out all the bug and slug hotels, so the little birdies can get in, now, to clear off any excess pests: we've raked off as much moss as we could, so the soil will have a chance to breathe, over the winter: and we've been able to get at a  lot of weeds which will otherwise smother our precious plants, next season.

We even "found" the obelisk, on the right there: alas, no sign of a climber, but maybe next year we can do something about that.

Once we've done the front part of this border, we'll throw on a good thick layer of our home-made compost, avoiding the bearded Iris area, because they don't need mulching, and in fact they have to sit proud of the soil, otherwise flowering is depleted. The phrase is "the rhizomes have to bake in the sun" in order to get good flowers the following year, so we certainly don't want to bury them in mulch.

And that's it, for this section, until spring.

This is a great time to be a gardener, you really get to see the bare bones of a garden, the structure of it: yes, gardens are beautiful in the spring, summer and early autumn, all full of colour and life, but I love a garden in winter, when you clear out all the mess and clutter, and suddenly it's all peaceful and tidy again.

And you get to see little hidden treasures such as this: 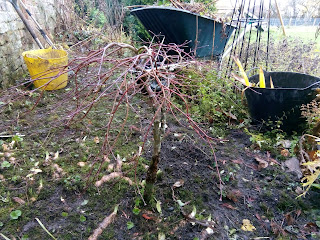 ...the dear little Acer, barely visible in the first picture, visible but not obvious in the second. Here, I'm crouching down, in order to see it sideways on, for a change.

Don't ask me which idiot planted a miniature Acer way, way at the back of a deep border, and hidden behind a big Yew topiary at that: I'm still trying to pluck up the courage to dig it up and replant it elsewhere.