I recently wrote about my technique for working around Yucca, which are evil plants to work with, because every single leaf ends in a skin-piercing point. This is quite bad enough when they stab you in the arm or leg, or - as happened to me the other month - on the forehead, leaving "one" with blood trickling down the face.

(Luckily I noticed it, and mopped it up before my elderly Client saw it!)

I hate to think how much damage they could do, if they poked you in the eye, which is another good reason for wearing eye protection when gardening, as I do. No, I don't care if the protecto-specs make me look dorky! If you could see the number of scratches on the lenses, which accumulate over a period of about 5-6 months - at which time I have to replace them because they are too scratched to see through properly - then you'd wear eye protection too, I tell you!

Anyway, getting back to the Yucca; if you've read the above article, you'll know that it was left something like this: 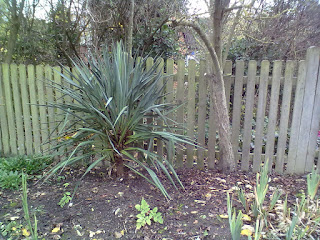 ...which was a big improvement on how it used to look.

But it still wasn't enough.

This year, the couch grass was returning, and even though I have my clever loop-of-rope technique, I was getting a bit tired of being stabbed every time I went near it.

In a different part of the garden, there is another Yucca (they are everywhere in this garden!) right next to a rose, which I need to dead-head on a regular basis.

So I get quite cross with the Yucca over there: and one of my work philosophies is based on a saying from one of my earliest bosses: "If a thing has happened often enough to become annoying, there is a very good chance that it will happen again."

In real terms, this means that if something happens often enough to annoy you, then do something about it!

So I invented a new pruning technique, called the pineapple-ectomy, which is where you take your secateurs and simply crown-lift the whole thing, as though each trunk were an actual tree, by removing leaves, starting from the bottom and working your way up. 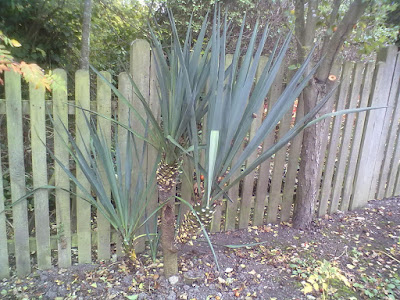 This worked so well, and made my life so much easier over there, that I decided to apply it to this Yucca as well.

You can see why I call it a pineapple-ectomy!

Now all the lower leaves are completely gone: the stems are clear, which I think gives them a far more architectural feel, as opposed to the former "blob of leaves sitting on the ground" effect.

And as the lower leaves start to droop, all I have to do is snip them off - a job which is easy to do, now that I can stand close to the plant without being stabbed.

A further benefit is that now I can see any couch grass as soon as it dares to set foot (or shoot) in the garden, so I can deal with it while it is small and feeble.

The Client liked this effect so much, that I did the same thing on all the Yuccas in this garden.

Which was quite a relief to me, as the gardener...

So there you go, an alternative way to present your Yucca!

Did you enjoy this article? Did you find it useful? Would you like me to answer your own, personal, gardening question? Become a Patron - just click here - and support me! Or use the Donate button for a one-off donation. If just 10% of my visitors gave me a pound a month, I'd be able to spend a lot more time answering all the questions!!
Posted by Rachel the Gardener at 07:35