How to use bark as a mulch

Well, you'd've thought this one was quite straightforward, wouldn't you?

It says on the pack, “apply as a decorative mulch to help suppress weeds and retain moisture” so you wouldn't think you could go far wrong, would you?

However, having just returned from a Consultation session with a Client who was extremely dissatisfied with their present barkage (no such word, really!),  I feel it is worth mentioning a couple of minor points that will make using bark mulch just a little bit better, more efficient, less costly, and less of a disappointment.

Firstly, what type of bark to buy? I would recommend micro-bark if you can get it: the smaller the pieces, the less of it you need to use to get a decent coverage, and the better it looks. Really coarse bark always looks untidy: and it's hard to know when you buy it, just exactly what you are going to get, so anything with "microbark" on the pack will be the better quality stuff. If in doubt, look all around the pile of bags of bark - there are usually one or two bags which have been damaged during delivery or storage, so you can often find a sample of the contents lying on the ground.

Second: prepare your ground. This is a big subject, as the way you prepare has a huge effect on the results. Decide beforehand why you want to apply bark: in fact, this ought to be Second, as this decision dictates what preparation you are going to need. So, let's look at that one first - why do you want bark?

Some of the options include to suppress weeds, to look decorative, to protect roots from frost, to preserve moisture, to be an easy-care surface, or any combination of the foregoing.  Before we run through those five, here are some facts which will be referred to as we go.

1) If you want really good weed suppression, you will need to lay a membrane down, over the soil and under the mulch. You might think that any old plastic sheet would do for this purpose, but there is a reason that the garden centres sell so much landscaping fabric: the membrane has to be water-permeable, otherwise you end up with waterlogged mulch and dead (dried out) plants. In my experience, the most expensive membrane will not stop all weeds, and the cheapest will stop most weeds: the cheapest being those yard-square builder bags that lorries deliver sand and gravel in: cutting them up and spreading them out is a bit of a pain, but you can usually get them for free!

2) Birds will flick the bark about all over the place.

3) Bark will slowly rot away to nothing: you will need to top it up, probably every second year.

4) You will need to be generous with it: a skimpy layer of bark looks terrible, especially if you go for membrane, as you will see bald spots poking out through the mulch.

A. To Suppress Weeds.   if you want it simply to suppress weeds, there are a couple of points to be made. Firstly, there are two types of weeds: those that are already in the soil and those which float down as a gentle rain of seeds from above. Mulch will not prevent the latter!

Of there former, there are again two types: those which are already in the soil as seeds, and which need light to germinate. This sort of weed can be successfully controlled by membrane and bark.

On the other hand, we have the sort of weeds that are already growing in the soil: deep-rooted perennial weeds such as dandelion, nettle and bindweed. Unfortunately, no amount of mulch will suppress them, they will just grow right on through it, and even a top quality membrane (see point 1) will struggle to keep them under control. Often, you will find that such weeds will sneakily grow along through the places where the membrane sheets overlap, popping up far from their original roots. They can be dealt with by spot weedkilling: but if you try to pull them up, you will find that you pull up whole sections of the membrane, which ruins the effect and means that you have to rake off all the bark (which is, by now, semi-composted), stretch out the membrane again, peg it down if necessary, then re-spread the bark. This is a lot of faff. If you have perennial weeds, it is far better to get rid of the weeds before you think about laying bark: either a determined weeding session, or a season of constant vigilance with the weedkiller, will be necessary.

And once all that is done, you will still need to be aware of points  2, 3 and 4.  This is where the disappointment comes in: if someone told you that a layer of bark will suppress all your weeds and look lovely for evermore, they are lying!

B. To Look Decorative.  In this case, a light scattering of bark can be made, as long as you appreciate points 2 (birds) and 3 (it will disappear).

C. To Protect roots from frost.  For this, you will need a deep layer, at least a couple of inches, which takes up more bark than you would think... and do bear in mind that many plants, such as roses, trees, anything with a main "trunk", will not flourish if left sitting up to their necks in a deep layer of damp bark - they will rot.

D. To Preserve Moisture: this is a valid use, but you must remember to water the bed very thoroughly before you apply the membrane/mulch, otherwise the mulch will act as a thatch,  preventing water from getting down to the roots of the plants.

E. To be an easy-care surface:  well, I guess bark does fulfil this function, as long as you realise that it is not a wholly weed-free surface. It does make it easier to walk on the beds, if they have a good layer of bark on them: your boots don't get all muddy, but too much foot traffic will compact the bark down into a sort of woodland path effect, which is less good at allowing water through for the benefit of the plants.

So, having decided why you want bark, having bought it, prepared the ground by weeding, weed-killing, and/or laying membrane, now we come to the actual application. 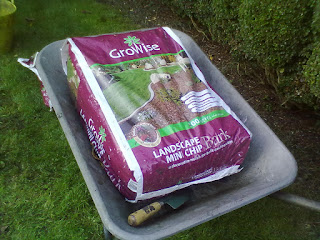 Here is a typical bag, it just about fills the wheelbarrow, and I can just about lift one of them into it.

Having trundled it round the garden to where I want it, the next job is to cut the bag open.

Don't rip into the middle, as though you were a dinosaur devouring a gazelle (or whatever tender fresh morsels were around 70 million years ago, I'm a Botanist, not a Paleontologist): cut open one end or the other. There are two reasons for this: if you cut the end, you can re-use the strong bag for any number of purposes in the garden - you can turn them inside out to make them plain black, if you don't like the jazzy printing - and because if you rip into the middle, you will just spill it everywhere and waste it. As well as wasting the bag. And I don't like waste. 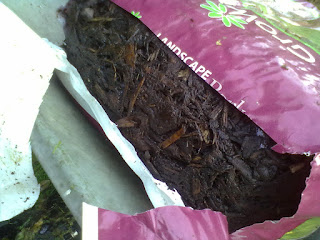 This - right - is the sign of a GOOD bag of bark. It is so compressed that, even though I've cut the bottom off altogether, the bark is not falling out all over my feet.

It is also dark and moist, this means that, although it makes it heavier to move, the bark is already damp, so it won't "steal" moisture out of the soil. Nor will it create a dry, water-repelling layer, thus depriving plants of the next rain shower. (It also looks much nicer, but that's just an aesthetic consideration.) 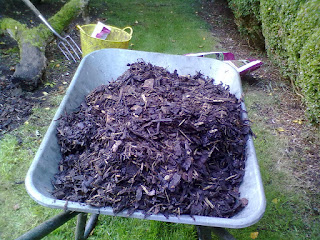 Having opened one end, tip out half of it into the wheelbarrow.

Now fluff it up, by hand: lift it, stir it, break up the lumps, get some air into it. The volume will expand dramatically - this is half a bagful, half of the bag that filled this same wheelbarrow, and you can see that it nearly fills the barrow, even though I've only used half of it.

Fluffing up the bark gives much better coverage: instead of having half a dozen great solid dollops, which crush anything they land on and make the bed look like the surface of the moon, you now have enough to make a good, even coating, without damaging the plants.

Best of all, as you can see in these photos, this bark is not already covered in a layer of white mould. Damp wood chip is a very attractive to fungus, and often you will open a bag to find a lot of white cottony stuff, or long white threads, in some or all of the contents.

Don't panic: it will be one of the many types of fungi that live on rotting wood: no, it's not honey fungus, no, it won't hurt the plants, no, it won't hurt you: it's perfectly natural, the spores are all around us in the soil, in the air, and all that happens is that the fungi help the bark to decompose, thus returning nutrients to the soil. They are, in fact, helping the bark to become composted.

Personally I don't find fungus to be at all attractive, so if a bag of bark does not arrive pre-fungussed, then I am happy! But if it does, no matter, I just fluff up the bark and fling it around anyway.

Now we come to the application: take a double handful of the fluffed-up bark, and throw it along the bed. Don't drop it from above - use a bowling action, and aim to skid the handful sideways onto the surface. This has the dual benefit of making it go a lot further in terms of coverage, and of preventing damage to plants. It often surprises my Clients, if they watch me doing this, that I can "bowl" great handfuls of the bark over perennials without damaging them, and without having to go round every single plant afterwards, shaking the leaves free of a heavy layer of bark. 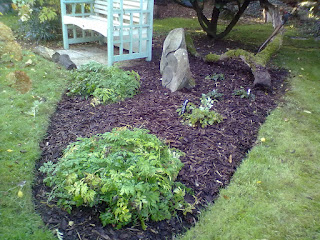 This fairly small bed took one and half bags of bark to make a good, deep layer: I had prepared the bed by digging a deep gutter all the way around the outside, so that the bark could fill the gutter, rather than spilling over onto the grass.

I know that the birds will still flick some of it about, and it can be a bit of a nuisance when I am edging, but the effect is very nice, and was much admired by the Client.

Posted by Rachel the Gardener at 17:55