Do we need to water new plantings in frosty weather?

I've had two questions on this subject in the last two days, and it's quite an interesting subject, so I thought I'd answer it in detail.

The first question was "With frost forecast for tonight, should I still water new plantings?" and the second was "Should I plant these newly-bought plants out now - late November - or leave them in their pots until spring?"

Taking them in reverse order - firstly, then, is it advisable to plant out new plants now, so late in the season?

Answer: yes. It is fine to plant out at any time of year, unless the soil is actually frozen. If you think about it, those plants in plastic pots are going to have cold frosty air all the way round them, on all sides, and on the top, but if you plant them in the garden, then they are protected by soil on all sides except the top - so on balance, plants are safer being in the ground, than being in pots.

Generally speaking I would prefer not to plant things out when we are in the middle of a cold spell, but it can be done,  as long as the soil is not frozen solid: a thin layer of frozen crust is not a problem, if the soil below it is still friable, and friable, in gardening, means that the soil breaks up into small crumbs. You can easily test this by trying to dig an 'ole in the soil: if you can't get the trowel in, or if all you can do is lever up one enormous wodge of solid soil, then it's too cold for planting!

However, if you break through a surface crust and find that the soil below is easy to work, then it's fine to plant out - there's a difference between a couple of mornings of frost, and that situation where it's been below freezing for day after day... that's what I would call permafrost, and there is simply no point trying to plant anything when the soil is frozen solid.

There is also a halfway house, if the soil is not really friable any more, but you still want to give them some protection : you can "plunge" them, which means putting the plant, still in the pot, into the ground up to the rim of the pot. The hole does not need to be a perfect fit, air gaps don't matter because the roots are still within the plastic pot, so even if the soil is horrible and hard, you can still chop out enough of a hole to slot the pots in, ramming the chunks back in around the pot as best you can.  This means that the sides and bottom of the pot are protected by the soil from frost, but they can easily be moved later, or next spring, into their permanent positions. Just don't leave them too long, otherwise they will root through the pots! Ask me how I know this happens... 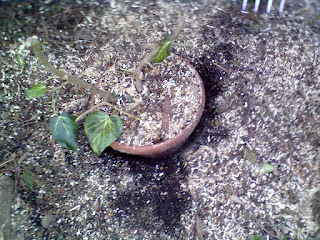 ...answer, a Client asked me to remove a large-leaved ivy when its supporting tree had to be cut down (hence the sawdust everywhere in this photo) and when I cleared away the mess, having cut off the top-growth, I found that it was still in a pot... 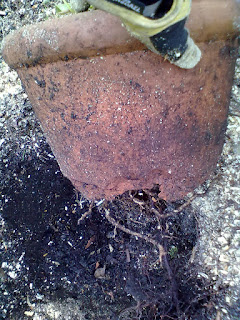 and when I lifted the pot, I found the ivy had completely shattered the bottom of the pot in order to get roots down into the soil!

Anyway, back to the questions:

Secondly, do I water new plantings when cold weather is forecast?

There are two aspects to this question, firstly there's the plant's point of view, and for the plant, it is usually best to water in new plantings, even on cold wet days, as the deluge of water helps to settle the soil around the roots, or around the pot-shaped root ball: air gaps are the worst things for plant roots, leading to root death, which is why we firm down the soil around them when we plant them.

They don't need as much water as we would use in summer, and generally speaking they won't need any extra watering over the first few days, as you would in summer, unless - when planting them - you observed that your soil is bone dry, in which case then yes, you will need to water the new plants for the next week or so.

But if the soil is dark, and damp to the touch, then other than the initial "settling in" watering, no, you don't need to water them again.  (Although it's often a good idea to give them extra watering next spring, which is when they will start to actively grow.)

The second aspect of the question relates to the possibility of the water, if you have watered them, freezing overnight. Will this damage the plant? Answer, no: this early in the winter, even a hard frost will rarely reach more than an inch down into the soil, and most of the plant's roots are well below that level.

We have all read that lovely suggestion about digging our vegetable plots over roughly in autumn and leaving the clods to be "broken down by the frost" which is absolutely true: the frost will freeze the water in those clods of soil, the water expands into ice and breaks up the clumps. But you will note that this only occurs on the surface of the soil, that's why we have to turn over the soil into clods, exposing it to the cold frosty air: and it can take all winter for there to be enough frost to work the magic. The plants, meanwhile, have their roots all a few inches further down, safely protected from the effects of the frost.

There, I hope that's answered a couple of questions: do please feel free to email me with questions, I love getting them!

As for the actual frosty mornings, I suppose you could look on it that when that frost melts, mid-morning, it does provide a bit of gentle watering for everything below!
Posted by Rachel the Gardener at 10:50