Some time ago, one of my elderly ladies gave me an ancient gardening book, which caused me much amusement: some of the things they used to do in their gardens are, shall we say, out of step with modern life, involving strychnine and arsenic on a regular basis.

How does it work?

It's a simple principle: lay the rose down until it is nearly horizontal, tie it firmly in place, and leave it there until it is forced to put up some new growth.

As luck would have it, last year I was asked by one of my ad hoc Clients about a rose in her garden: it was an old one, had been there for donkey's years, and it only had one upright stem, five feet tall, brown and stout, with a tuft of flowers on the top. Not very satisfactory! I suggested the dig-it-up-and-throw-it-away solution, but the Client said it had sentimental value, and was there anything we could do to keep it?

As I told her, the usual answers are firstly to take cuttings from the newer growth, in order to grow on a new plant, but that can take years to get to a decent size: or to prune the rose hard, in order to promote growth lower down: I've done both of these with success.

But this rose had just one single stem, and if we cut that down to ankle height, well, it would probably give up the ghost and die.

So I suggested that we try this technique, and bless her heart, she was brave enough to give it a go.

When I took hold of the rose,  I found that it was actually quite wobbly, it had done that trick where they seem to rise up out of the soil,  so it looked like a good risk to take.

The actual bending was quite nerve-wracking: what if I broke the stem? What if it split?  To my relief, it went straight down like a slow-motion skittle: 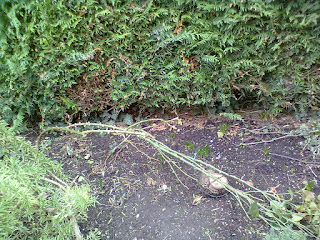 I didn't prune off any of the top growth, I just left it there, lying on the ground. 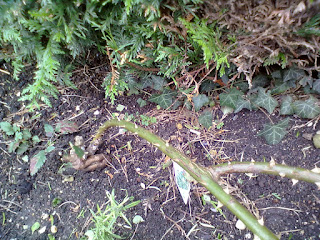 Here's the close-up of the base of the stem, showing that there is just one stem, and it is now bent right over.

Last week I was back in that garden again, nearly a year to the day later, and look! 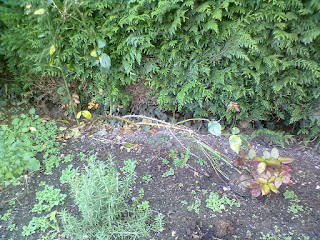 Lo! and behold, the rose had put up two lovely strong new shoots, one from right down at the base (“perfect!”), the second one from about a foot further along the stem.

Not the best of photos, but I hope you can see it: the first stem is on the far left, right where the brown arching stem leaves the ground.

The other is a little to the right, and both of them are strong, stout, and shooting straight upwards.

They had each flowered nicely, at about 4' off the ground: had I been there through the summer, I would have dead-headed them both very hard, probably back down to knee height: I might even have bent the two of them over and tied them in to the original stem, to get them to produce more new shoots.

Interestingly, the "old" growth did nothing: no flowers, no new shoots, all the energy went into these two new stems. 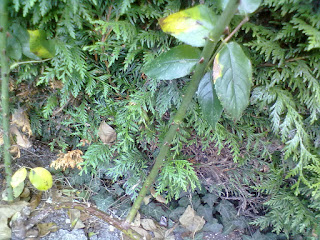 Here's a closer view of the two new stems: quite impressive!

As it's well into autumn now, I have left the old stem tied down for one more winter, and have instructed the Client to cut it off early next spring, as close as possible to the new shoots, which should also, at that time, be cut down to about knee height.

I have also suggested that they cut back the Thuja hedge a bit more forcefully, to give the rose some more room - and to water the rose well in spring, to promote new growth.

If it were mine, I would probably keep just the far left-hand shoot, the one nearest to the root of the plant, on the grounds that it will make a more natural-looking new bush: although it is possible that when the original shoot is cut off, the stump might well "spring" upright, which would actually be a good thing. The second shoot will quickly straighten itself out - at first, it will appear to be growing at a very odd angle! - and the rose will then be well on the way to creating a good new structure for itself, with branching much lower down than before.

Hopefully, next year there will be more strong new shoots, and this rose will be revived: so there you go, an interesting old technique which certainly does appear to work!

Posted by Rachel the Gardener at 13:55