Daffodils: why do we dead-head them?

"We can still have a virtual tête-à-tête" said Mal.   *shakes head, sadly* 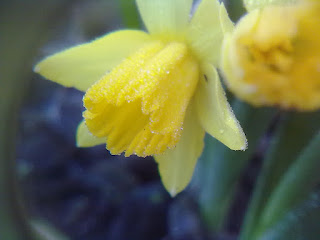 Here's one of my own tête-à-tête daffs, tiny, but perfect in the frost.

Moving on from terrible puns:  This week, I have been mostly dead-heading daffodils.

Yes, it's that time of year: they are starting to "go over" as we say, which means that the flowers stop being yellow and cheerful, and start being brown and ugly.

So it's time to dead-head. This means cutting or snapping off the flowering stem, removing the dead flowers altogether.

Before we get on to the Why, let's look at:

With gloves, because, as all good gardeners know, "All parts of the daffodil contain a toxic chemical, lycorine. The part of the plant that contains the highest concentration of lycorine is the bulb. However, eating any part of the plant can cause symptoms such as nausea, vomiting, abdominal pain, and diarrhea. "

You might be thinking that wearing gloves won't save you from that list of wonderful symptoms, but daffs also leak a lot of sap, and any flower arranger will tell you that the sap of a daff is very bad for any other plants in the same vase, and on that basis, I don't want it all over my skin, thank you very much.

How do we do it, actually?

Run your hand down the stem, as far down as you can reasonably reach, then snap it off. Don't pull, or it will stretch, bend and deform, leaving you with mangled foliage which refuses to break, and will have to be cut. If  you find you can't get the knack of snapping, then you can use scissors.

Here's some I did earlier:

A whole wheebarrow-full!  Can you see how long the stems are?

Why do it right down the stem, why not just pull off the flower heads?

Well, because the stem of a flower, despite being green, does not photosynthesize as efficiently as the leaves. And if  you just pull off the flowering head, you leave a broken, hollow stem, which will fill with water and rot - which might create a weak spot in the bulb, leading to the bulb rotting - and the broken tip will quickly go brown. So it's better to snap off the hollow stem as low as you can.

OK, we've got the hang of it, now tell us: Why do we deadhead?

I have at least four reasons.

I can hear an objection, at this point, you are saying "ah, but I want my daffs to spread, I want a whole colony of them, so I should leave them to go to seed, shouldn't I?"  And you would be right: in the wild (which, in the UK, means on roundabouts and path verges), they are left to their own devices, they don't get dead-headed, and they gradually increase.

Mind you, sometimes on verges with no maintenance, they just die out altogether -  here's a case in point, does anyone else remember driving through Swindon about 30 years ago, and seeing this: 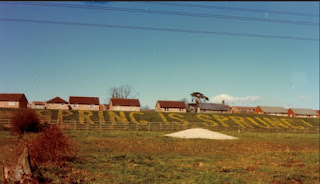 It's the bank beside the main through-road, the  Great Western Way, round about Toothill, and it spelled out Spring is Sprung! in daffodils, in great big letters.

Alas, all gone now: the trees have smothered them completely.

Anyway, back to our daffs.

Reason 2: they look horrible when they go brown. Yes, it's that simple! I often get Clients asking me to deadhead, just because they don't want to look at brown, dying flowers. You can see their point, especially if they are getting on a bit themselves - hints of mortality and all that.

Reason 3: There are many more daffs which are not yet fully open, so by removing the dead ones, you can get a clear view of the ones which are yet to flower: 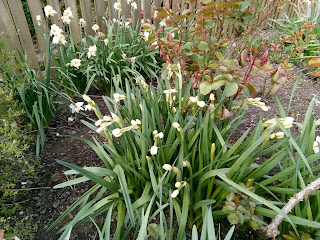 Here - left - you can see that the ones at the back are going over, but the clump at the front are still tightly closed, so we have their glory yet to come.

And it's much nicer to able to enjoy them without having nasty brown ones nearby.

Reason 4: By removing the spent daffs, it reveals the about-to-bloom tulips!  Tulips are shorter than daffs - well, I say that, they are huge compared to my dainty favourite tête-à-têtes, but compared to the honest old-fashioned full-sized daffodil. So if you left the dying daffs, you wouldn't see the tulips until they were fully opened: and even then, see point 3, they would be degraded by having brown dead daffs next to them.

Here's a before and after: 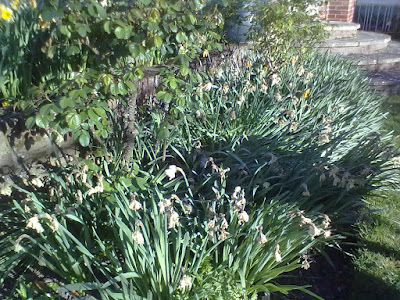 First the Before: a mass of dead daff flowerheads and a mass of green.

One wheelbarrow full of deadheadings later: 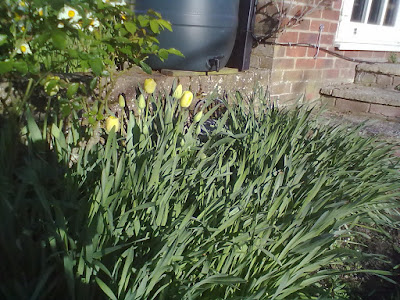 
So there you have it, how to deadhead daffs, and four good reasons for doing so. 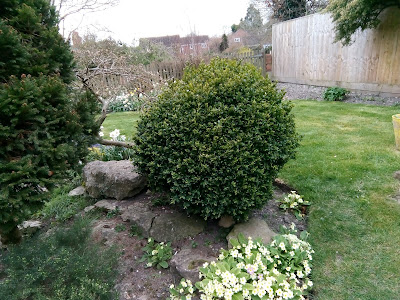 Posted by Rachel the Gardener at 16:40