You know you've made it as a Professional Gardener when ....

I was working in one of "my" gardens today, in the front garden for a change, clearing up the mess of fallen leaves now that the bluebells are starting to sprout (Spanish,  unfortunately, but hey ho, the Client likes them), and are lifting the old leaves like lids.

As an aside, I hate to say "I told you so" but I told the Client last autumn that we should rake up all the fallen leaves on the small front garden - I say "we" but I mean "I", of course - but no, she insisted we leave them there, saying that they would rot down over the winter. Oh no, they won't. Yes, in the wild, fallen leaves get blown under hedgerows and into ditches, and yes, out there they do indeed rot down into the soil. Eventually. Not for months and months. In a garden, they just get soggy over the winter, then dry out into great flat sheets of compressed dead black mush.  End of aside.

A passer-by stopped me, and said:

"'Eere, you see that shrub thing there, the one you've just pruned?"

He was pointing to a Cotinus coggygria 'Royal Purple' which I diligently pollard every year. Here it is, freshly chopped: 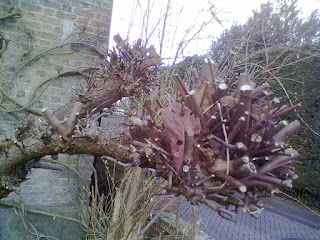 This is what we mean by pollarding: cutting off all the previous year's growth, in what appears to be a cruel and  unnecessary manner.

It promotes vigorous new growth, and in gardens, it is often done to get larger and more luxurious foliage - especially in something like this Cotinus, which has rich dark purple foliage. 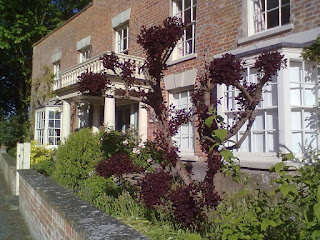 Here it is - right - in May of a previous year, just starting to sprout new purple leaves.  By mid-summer, is has branches long enough to interfere with passers-by.

Anyway, back to the friendly neighbour:

I pollard this one in order to get the best foliage:  we're not too bothered about the flowers, but we love the deep purple leaves, and if you pollard them every year you get superb leaves, but in some years you won't get much in the way of flowers - so I was just about to start explaining this, when he went on to tell me that his one had been "the best it had ever been, if you see what I mean."

"Me and me wife," he went on, "we always look to see what you is doing here, coz then we know it's time to do it in our garden."

So there you have it: apparently the residents of this street all keep an eye on what I'm doing, so they know when to do it in their own gardens!