"Be careful when using weedkiller, to avoid overspray onto other plants"

Good advice: weedkiller tends to kill everything it touches....

Unless they are cherry tree saplings, like this one: 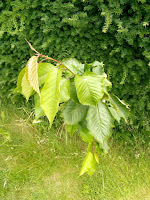 This is a self-set Cherry sapling, which I spotted last May growing under a clipped Yew hedge.

Never one to waste a training or experiment opportunity, I called over my Trainee and explained that we would deliberately spray this seedling, which at that point was about breast high, with glyphosate, to see how long it took to die.

We sprayed the foliage quite liberally, taking care not to splash the Yew hedge behind it.

And every week, we checked on it. Nothing happened.

All the books, all the articles, all the weedkiller packs warn you not to let the spray drift onto "other plants". And I can tell you, I've seen many examples where people have sprayed one weed, somewhat carelessly, and have accidentally killed off a whole swathe of things around it.

(I so wish I'd taken a photo of it!! Now I know that it takes approximately four steps on each foot to wipe off weedkiller from the soles of your boots...)

So, back to our experiment: the photo above was taken two months after we sprayed it, and as you can see, it's fine.

Now, 9 months later, the sapling is head high and looking quite lush. So much for the dire warnings about overspray.... actually, I think the real lesson here is that trees have a remarkable capacity for resisting it. Very small trees - anything less than knee height - are susceptible, but once they get past waist height,they are tough enough to withstand a certain amount of weedkiller.

This is not meant to encourage you to carelessly throw the stuff about, though: it's just an interesting point that woody-stemmed plants such as trees are far less susceptible to weedkiller than I had thought.

I still wouldn't use the stuff around the base of a tree though:  I'd get down on hands and knees and hand-weed around it.   Just in case...