April: grow your own patio spuds

Ever wanted to grow your own spuds, but feel that you just don't have room for them?

Have you decided that, what with the covid-19 lockdown and everything, it is time that you made the effort to at least try?

This year, perhaps you might try growing some patio pots of spuds, just to see what it's like to grow your own. Then, if you enjoy it, and if  you like being vegetably independent of the shops (that's a new phrase which I have just invented), maybe next year you'll turn over some of your garden for spud growing. So here's some info to get you going.

Patio pots means exactly that: some largeish pots which you can sit on your patio, nice and handy for the back door.

Here's a little experiment I did for a Client a couple of years ago:

We started with two pots, which had previously been used for bulbs.

Pot number one: filled one-third with nice new compost, then four chitted seed potatoes were carefully positioned, and covered with a couple of handfuls more compost. 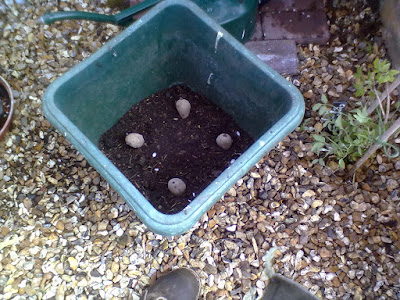 Chitting, by the way, is the process whereby you leave your seed potatoes in a light, frost-free  room for about six weeks before you plant them, so that they develop sprouts. People often sit them up in egg boxes, which always looks rather cute.

This is exactly the same thing which happens to your supermarket spuds, if you forget about them and leave them in the cupboard for too long.

But instead of growing a tangled mass of lanky white shoots, as your forgotten spuds do, they produce tight, short, dark purple sprouts - this is because they are in the light, rather than sitting in a dark cupboard.

Normally, of course, we don't want our supermarket spuds to go green and/or to sprout, because when they do, they start converting their starch into poisonous chemicals, making them less than delicious to eat.

But for planting, we do want them to "chit" or sprout, because then we know that they are definitely going to grow!

(And before you ask, yes, you can plant out neglected supermarket spuds, but normally people don't, because those long white shoots are fragile, and will easily be broken off as you attempt to plant them. So the spud will have to start again, wasting all that energy. You might further be asking if the whole "seed potato" sales business is a cynical way to get money from us, when we could just as well use our leftover supermarket spuds, and chit them? Well, sort of, and sort of not.  The "seed" potatoes which you buy are checked and certified virus-free, for a start: they are exactly the right size, not too big, not too small: and they are named varieties, so you know what you are getting. End of diversion, please drive on.)

So, pot number one had the chitted spuds placed low down in the pot, as is traditional: and we would add more compost as they grew, to "earth them up" as it is called. This is done to force the plants to produce more and more new tubers, all the way up their stems. It also ensures that the tubers which form, are kept in the dark ie underground, so they don't go green. See note above about green potatoes going poisonous...

Pot number 2: we decided to try the "plant on the surface" method. This involves filling the pot with compost, nearly up to the top: 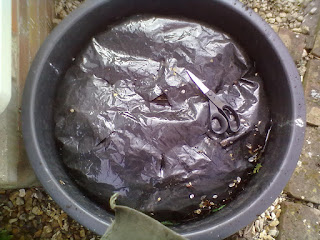 ...then covering the soil with black plastic (actually an old bark chip bag, cut up and used inside out), tucking it neatly in at the edges. 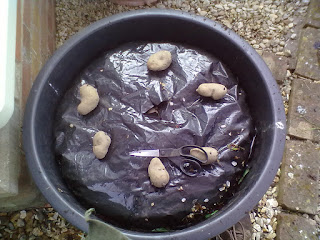 Next, we take our six chitted potatoes, make slits in the black plastic, and poke them in through the slits.

The idea behind this method is that the plant grows through the slit, thus receiving light: and the tubers grow under the black plastic, not needing to be earthed up, and - importantly - not needing to be dug up at the end, because they will all be sitting on the surface waiting to be cropped. But they won't be green and poisonous, because the black plastic will exclude light.

So, two pots, alike in dignity. 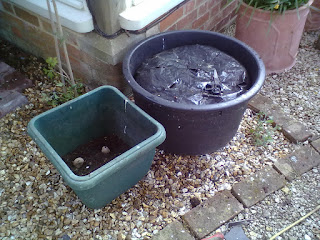 This was all done on the 9th April. Not this year, obviously! 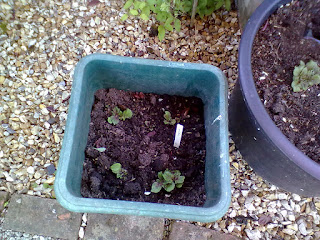 As you can see, pot number one now has soil halfway up the pot: as the green shoots grew, I "earthed them up" by adding more compost

Pot number two is less dramatic, and is partially out of the frame, oops.

In fact, they look as though they have about the same amount of growth, but we know that the square pot's plants have grown a couple of inches and have been earthed  up, whereas the round pot's plants have just stuck their noses out of the bag, and that's it. 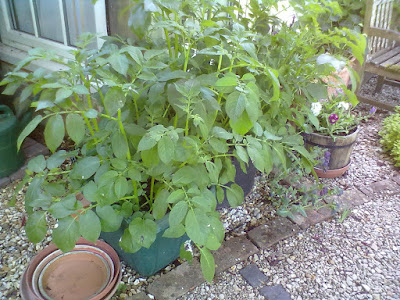 By the end of May, a month later, there was nothing to choose between the two pots.

The square pot had been earthed up to the brim, and both sets of plants had made excellent top growth.

Being in pots, we had to keep them well watered, of course.

By the end of July, they were ready to eat, so we emptied out the pots and compared the crop.

We all agreed that the traditional ones took more effort to get them out - I had to tip the pot over on the grass, and pull the whole thing out in order to get the spuds. This was fairly messy, which might be a problem if you really are growing them on a patio, and don't have any handy grass to use. You would have to spread out some sort of mat, sheet, or cover.

The plastic one was much easier to get to, all I did was cut off the top foliage, peel back the plastic, and there they were.

However,  I found the combination of black plastic, shielding foliage, and lots of watering, had created a sort of running buffet for slugs, and about half of the crop had to be thrown away because they'd been sabotaged by the slugs.  Call me old-fashioned, but when eating meat with my spuds, I prefer the meat to have had legs....

So there you have it, growing patio spuds definitely does work: you don't get a huge crop compared to growing them in the ground, but it's well worth a try, as there is not much which is more satisfying than eating veggies which you have grown yourself!