"Today I have been mostly... weeding a slate path"

This is one of those back-breaking but ultimately rewarding jobs.

Here's what I started with: 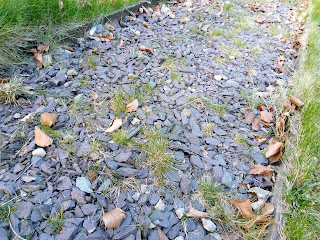 It's one of a series of pathways around a herb garden, with wooden edging, and an infill of rather nice purple slate bits.

Currently full of clumps of grass, brambles, thistles, you name it. Not lovely.

Well, to be fair, it did look lovely a year ago, but it's been somewhat neglected since then, and you can see that it is also still holding the dead beech leaves from last autumn, which is yet another problem with allowing paths to become infested with weeds.

Answer, get down there on hands and knees and hand weed it.

Well, I could, but there are a couple of points against that course of action, first and foremost being my reluctance to use weedkiller unless I really have to. Chemicals are noxious, they cost money: ok, they are usually speedy to apply, but they have a couple of major drawbacks in this situation, to whit:

Secondly, weedkillers take a couple of weeks to finish working (don't bother with all those "24 hour" things, they just make the top growth wilt quickly, but the roots will survive, and grow back in no time) so the garden owner has to watch the weeds dying for two weeks or more.

Thirdly, the dead weeds then just sit there for several more weeks until they eventually disintegrate, so most of the time,  the garden owner begs me to clear up all the dead bits. This means that I am - fanfare of trumpets - hand weeding them. Yes folks, that's the only way to clear the mess, so why not just hand weed in the first place?

And fourthly, the decaying weeds are dropping their materials back down into the mulch/shingle/slabs, thus depositing another layer of organic matter which makes a perfect seed bed for - you guessed it, new weed seeds! So by using weedkiller, you are actually contributing to the problem.

So on balance, it's hand weeding every time.

Once the area is completely clear, then is the time to consider applying weedkiller: something like Pathclear, which stops seeds from germinating.  I do plan to spray these paths, now that they are clear. 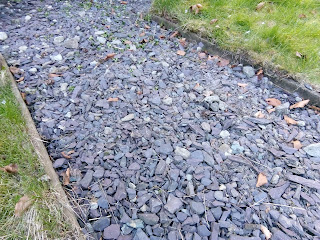 ...you can see that the weeds are gone,.

I have also trimmed back the overhanging grass along the wooden edges (taking just that extra little bit of trouble, makes all the difference!), and have also flicked back onto the path any bits of slate which have found their way onto the grass.