James sent me some photos of his rather lovely Weeping Pear - Pyrus salicifolia 'Pendula' - because he's a bit concerned about it: it doesn't seem to be as vigorous as it was. 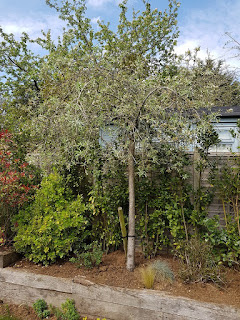 Here is James' tree, you can see that it's been nicely staked, and it has a good clear trunk with all the foliage springing from a point which is just above fence height.

As an aside, this is a lovely compromise between giving yourself a privacy screen between yourself and next door, and not taking up too much room in your own garden: the clear trunk holds the branches up high, so that light and water can reach the bed below, which gives the owner the chance to get some seasonal colour and some foliage interest into the area.

Many people, in this situation, would have bunged in a dirty great evergreen Laurel, or some Leylandii, which would have been 100% successful in providing privacy, but would have been the same all year round, and would have filled up the rather narrow border completely.

An ornamental Pear is so much prettier!

Right, on with the plot:

Now, we all know about grafted trees, don't we (chorus of "Yes, Auntie Rachy" in depressed voices) because I've written about them several times, mostly to do with my dear friend Salix 'Kilmarnock' ,  the much-maligned miniature weeping Willow, but sometimes it's Weeping Pear, or Contorted Hazel.

About half the time,  the questions are about pruning them, or retrieving them if they've escaped and gone wild, and the other half, the questions relate to the graft. Usually, people don't understand the implications of grafted trees, and are struggling to deal with reverting rootstock shoots which are spoiling the ornamental tree, but in James' case, he has noticed that  his tree's graft appears to be damaged. 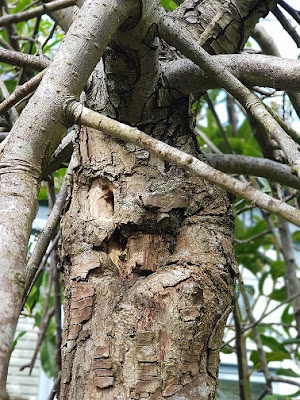 Here's the offending area: the tree is grafted at about head-height, and this photo shows a large damaged area just below the graft.

Now, first the bad news: the graft area does indeed look pretty bad, but that is something which grafted trees suffer from: it's an un-natural state of being, and in addition, Pears are not long-lived trees (compared to oak, ash etc!).

Now for the good news: I have seen grafted trees with similar damage, and for that matter I've seen non-grafted trees with much, much worse damage, which go on for years and years, looking unsightly but still growing.

And, more good news, because this damage is right up high, under the canopy, it's not going to be terribly visible, especially when the tree is in full leaf.

Looking closely at the damaged area, it's not rotting away, it's not been ripped, or eaten: it doesn't look like a fresh wound, it looks quite clean, and the edges are "rounded".  Does that make sense? I can't think of a better way to describe it, but my point is that it is not fresh damage, the bark has grown around the damaged area. Which means that it's less likely to mean that the tree is actively dying, if you see what I mean.

The  upper hole looks as though a branch has simply died back at some point, and although the lower and bigger hole looks a lot worse, it does also look as though it might also be the result of a branch dying - as opposed to something from outside attacking it.

It's always hard to be definite when only working from photos, but it's possible that those two wounds were made by the nursery who grafted the tree: they might have had to remove a couple of non-grafted branches which had sneakily sprouted while they were growing the tree on, before selling it: it's possible that these were a couple of grafted branch sites which failed to take: or the damage might have occurred since it was planted.  I neglected to ask James how long it had been there, but his comment about it losing vigour implies that it's been there at least a year or two, in order for there to be a comparison.  And I also didn't ask whether the damage was there all along: sometimes people don't look that closely at a plant, until it draws the attention by being a bit sickly.

On balance, then, I'd be cautiously optimistic about the future of this dear little tree.

Taking it a step further, James mentioned that he thought the tree was losing vigour: if it has lost a couple of the original grafted branches, then that might explain an apparent lack of vigour, in that it might have fewer branches this year - assuming it's a recent loss, which I must admit doesn't look the case.

So, what can James do?

Firstly, I would say don't try to cover the wounds: in the old days, people used to brush tar across tree wounds, or specialist sealant, but nowadays we realise that this is more likely to seal in moisture - leading to decay and death - than to seal out "germs". So the recommendation is to leave them open unto the air.

(Side note: someone asked me last year why I always phrase it like that - not "open to the air" but "open unto the air" and the reason is to do with A-level English Literature, and studying the poets. It's from a Wordsworth poem - yes, he wrote about more than daffodils! - called "Composed upon Westminster Bridge". End of digression, please continue:)

Secondly, you can see from the first photo that the tree is in a narrow bed, so there's not a lot of soil for it: it's a raised bed, so it will have better drainage than if it were planted in normal, flat ground: and there's an awful lot of competition - there are evergreen shrubs behind it, to either side, and of course the neighbour's apple tree right close by.

My recommendations, therefore, would be to give it a darned good soaking: at least two watering-can-fulls a day, once a day for a week, and once a week for a month. I would also use the word "gently" to apply to the watering - don't slop it all over in one go, because if you do, much of it will probably run off the bed without soaking in. Let it soak in properly - if it takes you five minutes to do it, instead of five seconds, well, just relax and enjoy five minutes of being out in the fresh air.

NB, if you find that the water just runs off the bed, then check this article on watering: Part 4: Resuscitation, as it covers that topic quite nicely.

I would also give it feed: something like Growmore,  or Liquid Seaweed, diluted as per the instructions. If  neither of those are available in the garden shed (bearing in mind the difficulty of going out shopping) ("Covid-19 lockdown restrictions", just in case anyone is reading this in five years' time and wonders what I am talking about!),  but there is a pack of Fish, Blood and Bone, that will do - having watered the soil on the first day, scatter a fistful of the stuff around the base, and scuff it in gently with a hand-tool. Then water again, to wash it right down into the soil. Yum!

Well, that's all I can think of for the moment, so good luck, James, I hope this helps!

Did you enjoy this article? Did you find it useful? Would you like me to answer your own, personal, gardening question? Become a Patron - just click here - and support me! Or use the Donate button for a one-off donation. If just 10% of my visitors gave me a pound a month, I'd be able to spend a lot more time answering all the questions!!
Posted by Rachel the Gardener at 11:57