Lime Seeds on a shingle path 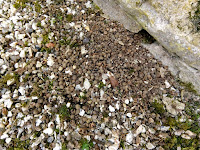 ... and they are indeed leftover lime seeds.

There is a huge lime tree (Tilia) just the other side of the wall, and it drops thousands of seeds into the garden, every year. 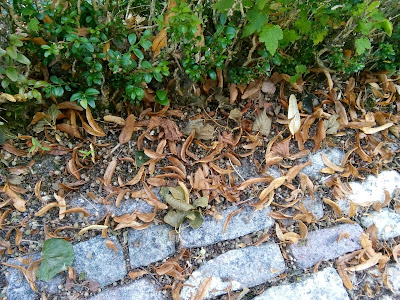 This is the sort of mess - right - which I get to clear up every year at around August/September time.

Lime trees, like Ash trees, and Maples,  produce seeds with their own helicopter blades: these winged seeds ("samara", in botany-speak)  are designed in order - allegedly - to allow them to spread far and wide.

Ash and Maple produce seeds with two wings: Lime prefer to drop them with one long papery leaf-like blade, and the idea is that they flutter round and round, keeping the seed aloft for a longer time, so that the wind can catch them and disperse them far and wide.

No-one knows why Lime trees bother with this seed dispersal mechanism when, as you can clearly see, the vast majority of the seeds end up directly below the tree, ie in "my" garden.  *grumble grumble* 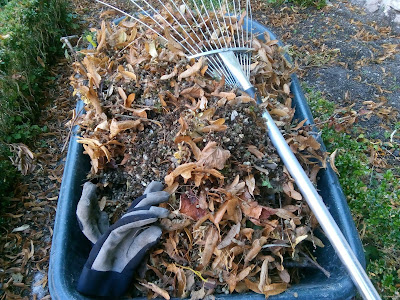 I'm not exaggerating - here's the first barrow load of the things, and it was the first of many.

It went on for weeks! Lime seeds everywhere... and they're a nightmare to rake up from shingle paths, even with a Spring Rake (warning: gardeners' joke approaching - "which we mostly use in autumn"), because it's so hard to get the seeds clear of the shingle.

Once the seeds have landed ("Crash! Thump! Helicopter Blade Failure!") they gradually disintegrate, the blade part (which looks just like a long narrow leaf, at first sight) falls off and the round ribbed seeds remain where they are, and hopefully, from the tree's point of view, find some nice soft soil in which to lie dormant over the winter, and then to germinate in the spring.

It would appear that some small furry critter spent a lot of time dragging them into this section of the path, then carefully nibbling their way into the seed: 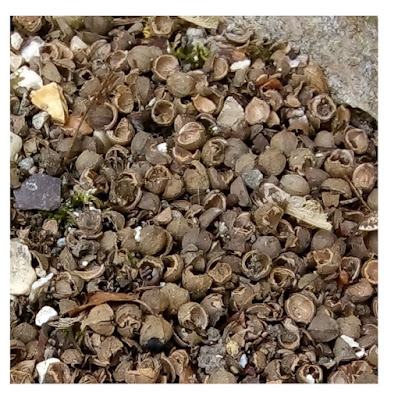 Let's hope that they were delicious!


Did you enjoy this article? Did you find it useful? Would you like me to answer your own, personal, gardening question? Become a Patron - just click here - and support me! Or use the Donate button for a one-off donation. If just 10% of my visitors gave me a pound a month, I'd be able to spend a lot more time answering all the questions!!
Posted by Rachel the Gardener at 07:30