Hydrangea: why we don't prune them in early April!

Here's a lovely sight ("not") - a Hydrangea which has been nipped by the frost: 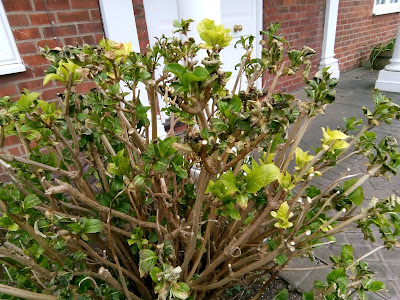 Who got the flamethrower out? *laughs*

To be clear, this is a hydrangea which has NOT been "pruned", although I have nipped off the nasty brown dead flowerheads a few weeks ago, as I think they look really ugly.

This is a good illustration, though, of why it's best, in the UK, not to prune them back properly at the first sign of nice weather...

Most books and articles say that in the UK, Hydrangeas are pruned in "late winter to early spring".

But they also warn against pruning before the last frost - and you can see why, as this is what happens to Hydrangeas which start enthusiastically sprouting, before we are done with the frosty mornings.

So, when should we actually prune them? I used to work for one lady who would never let me prune her many, many Hydrangeas until we were well into May: on the other hand, I have Clients who tell me to prune them the minute the sun comes out in March!

My compromise is to take off the brown dead flower heads, and any obviously dead stems, either whenever the weather starts looking a bit more spring-like (which varies hugely) or - frankly -  just as soon as I'm tired of looking at them, which is what I did with this one.

But as you can see, I don't prune back to "the lowest fat healthy buds" - no, I save those in case we need them. For good reason!

There's always a compromise in pruning woody perennials: if you prune them too early, there's a risk of this happening - the frost nips all the outer buds, and the plant is either ruined, or given a major set-back.

But if  you don't prune them, and the weather turns nice, all the buds sprout, and you then have to decide whether to prune it properly, thus "wasting" all that lovely growth - or whether to leave it, in which case the bush gets bigger and bigger until it's so big and woody that whole sections of it die: or until it's so big that you can't get down the path any more, and end up chopping bits off, leaving it unbalanced and spoiling the flowering display.

If "one" had pruned "one's" hydrangea down to a pair of nice fat buds a couple of weeks ago, when it was hot and sunny, "one" would now be faced with a lot of dead leaves, ruined buds, with not many options for cutting it back even further.

Left like this, you can see that there are plenty more buds and leaves further down each of the stems, safely protected inside the microclimate of the branches.

So in another couple of weeks, once we are safely out of April, I can go in and prune it properly, down to the lowest "nice fat buds" that I can find.

And yes, this will mean having to chop off some lush growth towards the ends of the branches, but better that than being unable to get in the front door: and if I time it right, I won't have to "waste" too much of the new growth.
Posted by Rachel the Gardener at 07:30