Last week I started off some seeds for, among other things, my Climbing French Beans.

As an aside, for years, I always used to grow Runner Beans, mostly because "that's what we always grew" when I was young.

So, Climbing French Beans it is. They are now merrily germinating indoors, and it was time to prepare the bed for them.

This means taking off the anti-cat-fouling cover (wire mesh on a wooden frame) and lightly forking over the bed, removing any weeds.

As I fluffed it up, I found a sprouting seed! Wow! Could it be an un-germinated bean from last year? 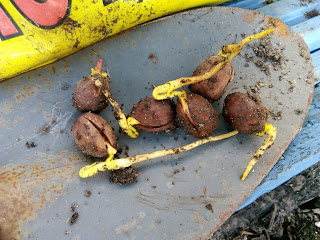 I found over a dozen of them: bright yellow sprouts ("hmmmmm - not beans, then") and the "seeds" looked a bit solid to be any sort of vegetable.

Duuuh! They are hazel nuts, from the hazel hedge next door.

Those blasted squirrels must have sat on the top of the wire mesh, poking the hazels down through the squares, into the soil.

So, out with the hazels, I have quite enough of them next door and don't need any more, particularly not in my veg bed.

Then my daisy grubber hit something solid.

"Ouch!" I yelled, as the pain shot up my wrist.  I've had this veg bed in this position for years, there can't be any builder rubble in it, surely?

So I dug around a bit, and found a hard, solid lump that would not "give" at all.

This is what I unearthed: 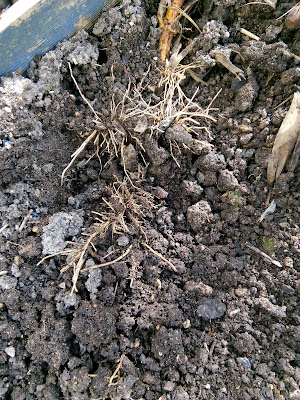 What on earth is it? Roots of some kind, but as hard as half a brick (which is what I thought it would be, when I hit it with the daisy grubber),

Further excavation revealed that it was a tangle of solid roots, sending out an enormous shoot to the right, which went over a yard to the side. 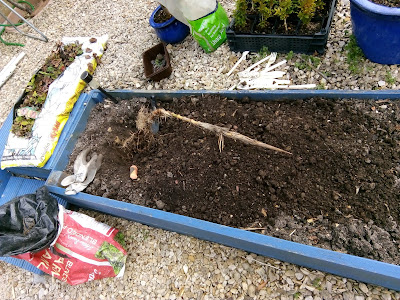 There you go, you can see it shooting off along the bed.

This, of course, gave the game away: it's a bamboo shoot.

"Uh?" you might be saying, at this point, "why is there a bamboo shoot in your tiny veg bed?" 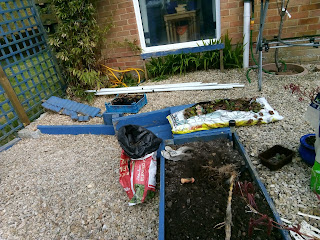 The answer is that I have a large Phyllostachys nigra (that's Black Bamboo to the non-gardener) (or the "fairly new to it all" gardener) in one corner of my small garden, about 6-7' away from this bed.

As you can see, right.  (Sorry about the mess, but I'm partway through the job!)

And the crafty thing had sent out a questing root, all the way under the shingle, under the step, and up into my veg bed.

This is somewhat unusual: some Bamboos are famous for "running", and being a nuisance: in fact, Bamboo are usually labelled as either runners or clumpers, and P. nigra is usually a very well-behaved clumper.

That's partly why it's so expensive to buy: it doesn't normally spread itself, so you can't pot up the runners. You have to lift and split the clump, and grow them on to saleable size, which can take years.

But alas, this one has decided that it's time to head off into the sunset, via the rest of my garden.

Posted by Rachel the Gardener at 10:27

Email ThisBlogThis!Share to TwitterShare to FacebookShare to Pinterest
Labels: Grow Your Own