Truly is it said, when two or more gardeners get together, they will talk about the impossibility of finding waterproof working boots...

Quite some time ago, I wrote a couple of articles about the problems I was having with wet feet: first of all I wrote about the various methods I'd tried to waterproof them, including Dubbin. Then, I did a little bit more research, and wrote about my disappointment with Dubbin.

It was quite amusing, to receive so many comments from people telling me that dubbin works perfectly, when it clearly does not: many of them told me that I was applying it wrongly, despite me describing in some detail, the steps I went through - cleaning and drying the boots beforehand, warming them, hair dryers, blah blah blah.

And then there was the great Scotchguard, candle wax and neatsfoot oil experiment: nope, no luck there, either.

Today, I had a new comment from Virgil ("Hi, Virgil! You were always my favourite Tracy brother!") (I expect he's sick and tired of Thunderbird jokes by now....sorry!), who said:

"I know this is an old thread, but very interesting.

"The dubbin I use has beeswax, cod liver oil, and lard. I assume the beeswax is what is doing most of the waterproofing. But, what is of utmost importance is also treating the welt around the edges of the boot. I am not sure any leather boot is 100% waterproof as water can get in from the top edges and through the lace area if there is enough water. I will say my no lace cowboy boots are as waterproof as it gets.

"I think these treatments just make things better, but if you are in pouring rain or walking through water puddles, you are going to  get wet."

Passing over the fact that it's nearly ten years since I wrote those articles, and you would have thought that by now,  technology would have progressed to the point where leather work boots which keep out the water for more than 20 minutes were a real possibility....

...anyway, Virgil, I take your point about the weak points of any pair of boots being the seams.  I don't attempt to paddle in my work boots, but I do have to work in areas with grass and foliage, which quickly soaks the lower half of the boot, and of course that's where the leather uppers are joined to the soles.

Sadly, I've given up on attempting to waterproof my work boots: now, I just change at lunchtime into dry boots and socks, and I have a drying rack permanently in the hall: and once the boots have dried out, I slap on a blob of common or garden hand cream (Nivea Soft works well, I have found), and rub it in all around the toes, the lower part of the boot, and particularly the area across the top of the foot, where they crease up - ie the vulnerable area. 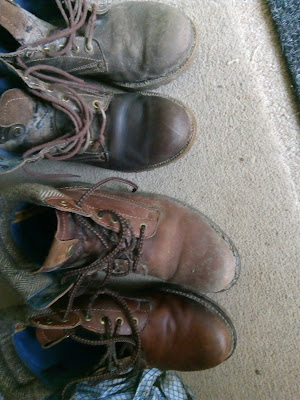 Here - left - are yesterday's boots: they've dried out overnight, and in each case, I've done one boot but not the other, so that you can see the difference.

At present, I'm actually using up an old pot of Atrixo, but it's a very similar consistency to Nivea Soft. (It smells a bit, though, so I'll save the Nivea for my hands, and use up the scented Atrixo on the boots!)

This seems to be enough to keep the leather beautifully supple, and - as I say - I've actually given up trying to get them waterproof.

So there is the conclusion to this series of articles: NO: it is NOT possible to have waterproof, leather, working boots, for any sort of reasonable price.

Did you enjoy this article? Did you find it useful? Would you like me to answer your own, personal, gardening question? Become a Patron - just click here - and support me! Or use the Donate button for a one-off donation. If just 10% of my visitors gave me a pound a month, I'd be able to spend a lot more time answering all the questions!!
Posted by Rachel the Gardener at 07:33