Overgrown Hazel: how to restore

I had a question this morning from Gareth ("Hi, Gareth!") concerning a large Hazel, which he says used to be a contorted Hazel, but which has mostly reverted.

He'd like to reduce it a bit: it's quite dense, and bulky, but he doesn't want to take the normal coppicing route, because the height of it provides welcome and necessary screening from passing double decker buses. 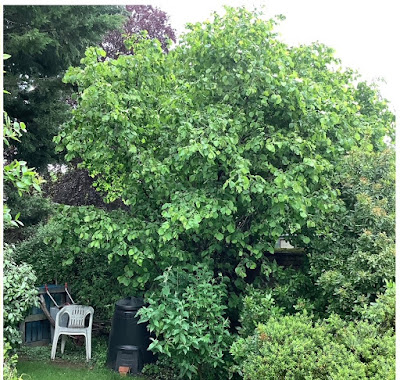 Well, it is indeed quite big, and does seem to be trying to take over the entire garden.

Definitely time to cut it back!

The good thing about Hazels is that they can be cut back hard: pretty well, as much as you need to: and they will always recover.

(Well, I say "always" because I have never yet known a Hazel which did not recover from even the harshest of coppicing, but there's always a first time.)

If you're not quite sure exactly what coppicing is all about, here's a link to my original article on this topic.

I have also written about how to "manage" a proper contorted Hazel: this isn't of interest to you at the moment, Gareth, but might come in handy in later years.

More usefully, I've also written about a sort of semi-coppicing method of controlling a formerly-coppiced "normal" Hazel, but without being so drastic.

And I feel it's that latter method which is going to be most useful for Gareth.

I'm quite intrigued by the idea that this was originally a contorted Hazel - and this does go to show why annual maintenance is so important, because contorted or curly Hazel are ornamental, unusual, very striking, and expensive to buy: so it seems a shame that someone has allowed this one to revert to common non-curly Hazel, at some time in the past.

So, what I would recommend, in this case? Here's a closer view of the base: 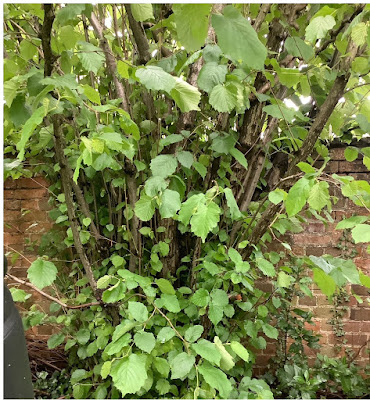 ...and you can see that it is exhibiting the classic "overgrown coppice" growth pattern, ie lots of long straight stems, of a similar sort of size, instead of having one big trunk, in the way that normal trees do.

I would suggest that Gareth arms himself with a pruning saw, and starts removing the outer layer of shoots, cutting them as close to the base as he can.

I'd cut off all those little small wispy ones in front first, so that I could see what I was doing.

Then I'd take off the outer ring of straight shoots.

If there are any curly ones, by any chance, they can be left... but all the dead straight ones should go.

Once that's done, the tree will be thinner, but still the same height, because the height comes from the inner stems, the older ones.

Next job, is to assess the slightly thinned tree, and see if there are any older stems which can be reached with the pruning saw.

This gets tricky, because the stems get in the way of the saw - and that's why I suggest going round the outside first: it clears the way, for access to the inner portions.

It's always best to take out the older wood if you can: you'll know which ones are the oldest, because they will be the thickest ones. However, sometimes it's simply not possible to get at them, without damaging too many of the other stems.

And that, of course, is why "proper" coppicing is such an efficient, time-honoured method of managing woodlands: it's quick! And easy!  No faffing about, off with their heads!

However, in a garden situation, we can take a bit of time, and restructure the tree to suit our needs, and in Gareth's case, we need to keep the height, but lose the excess growth below.

If I were doing it, I'd keep removing the lesser, straight, trunks, until the base of the tree - technically, the "stool", but there's always something vaguely funny about using that word -  looked less crowded, and until the area around the base was clear of smaller growth.

Then I'd stand well back, and take a look at the overall thing: did it need any more stems removing? Was it now looking lighter, more airy? Was it still providing a good screen?

If it was still looking a bit heavy and dense, I'd take out one or more of the oldest, straight, stems, until the top part was about where I wanted it, in regards to thickness.

Gareth asked about reducing the height: with Hazel, it's never a good idea to try to shorten some of the stems in order to reduce the height, as this leads to the cut stem producing a bunch of new stems right where you cut it, which makes the tree even more top-heavy. It also spoils the "form" of the tree.

So if I wanted to reduce the height, I would cut out the oldest, thickest straight stems, rather than trying to lop bits off the top. The oldest stems are obviously the tallest: so by removing them, you reduce the height, but in such a way as to leave a much more natural shape.

And that is pretty much all there is to it.

There is some regular maintenance to be done: in a month or so, Gareth will need to check all the cuts which he made, and will need to rub off, or cut off, every single bit of re-growth that he can reach. Otherwise, this time next year, the base will have a couple of dozen new, straight, stems growing, and in no time, we'll be back to the starting point again.

This will need to be repeated at intervals through the summer, and will certainly need to be done every year in spring.

Again, if it were mine, then next spring I'd repeat this process, and would remove another couple of the oldest straight stems, bearing in mind the necessity of keeping some height, for screening: the idea being, to keep removing a couple of older stems each year, until you arrive at the optimal balance of height, and density.

One further point: as this is, or was, a contorted Hazel, then it might be possible - after a couple of years of regular straight-stem removal - to restore it to being just contorted wood again. That depends on how much contorted wood there is, proportionally: without all the supporting straight stems, what is left might not be thick enough, or tall enough, to act as a screen. But it's worth thinking about.

So there you have it: a plan for reducing bulk, without sacrificing height - to keep those double-decker buses at bay!

Did you enjoy this article? Did you find it useful? Would you like me to answer your own, personal, gardening question? Become a Patron - just click here - and support me! Or use the Donate button for a one-off donation. If just 10% of my visitors gave me a pound a month, I'd be able to spend a lot more time answering all the questions!!
Posted by Rachel the Gardener at 10:44