I've written about this topic already - here's an article about a pair of historical coppiced hazels which were in need of renovation.
So I won't repeat the story of coppicing,  other to say that coppicing was a way of managing woodland which was in operation for thousands of years, producing a variety of crops from firewood and charcoal to beanpoles, pea sticks and other plant supports; fencing, hurdles and other garden structures; hedge stakes and binders; baskets, walking sticks, ties for fastening thatch pegs: all these and more, produced  in a totally sustainable, low-impact, extremely low-cost, minimum maintenance way.
Pity we stopped doing it, really... but the result of the industrial revolution and increasing urbanisation means that, all over the country, there are thousands, possibly millions, of former coppiced trees - hazel, sweet chestnut, and willow being the main ones, but also including alder, oak, hornbeam, beech, birch and even sycamore - which have been left to go to rack and ruin. We no longer need all those products: now we have gas boilers for heat, low-quality mass-produced fencing, and plastic.
This means that in almost every woodland you pass or walk through, you will find the remains of coppicing: trees which have, instead of one single large trunk, a multitude of smaller stems, all sprouting upwards from the same place. So look out for them, next time you go out for a walk!
They also occur in modern gardens, particularly where former woodlands were parcelled off for housing - you often find old coppiced trees in largeish gardens.
Yesterday I had one of them to attend to: an old hazel coppice, in a garden setting, which was growing a wee bit too big for the area, and needed to be controlled - but not too much.
Here's the Before picture - yes, I actually remembered to take a photo before I started! 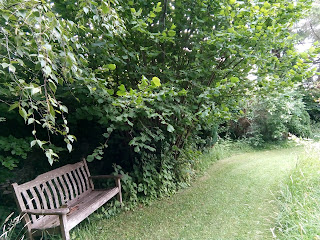 As you can see, not particularly offensive in any way, but it is getting a bit boisterous, and if not controlled now, it will become unmanageable in a year or two's time.
It also overhangs the bench, and the owner wanted to be able to sit there without having branches slapping them in the face... and to be able to mow without ducking under the branches... so I got my pruning saw out, and set to work.
As this is a "cosmetic" pruning, I wasn't actually re-coppicing at all, I wasn't going to cut the whole thing - I was just removing some of the branches in order to thin and lighten the tree.
Normally, the routine would be to remove the oldest branches: but in this case I decided to just take off the outside fringe of branches, which would leave a more upright shape and would reduce the bulk and the width, without sacrificing any of the height.
Privacy was also an issue: there is a neighbouring property to the left, just behind the bench, and it was essential to keep a good amount of screening on that side.
So, out with the pruning saw - there wasn't room to use the trusty bow-saw! - and off we go. 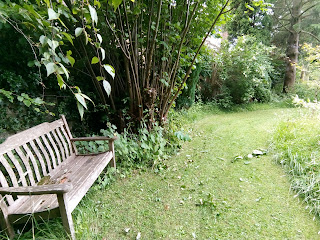 There we go - hardly any difference, really.
Except that now, the hazel no longer overhangs the grassy path, and the bench is clear, and is back in the sunlight again.
The owner asked me to remove some of the rear trunks as well, because the neighbour had "mentioned" the overhanging branches on their side, so I cut out a few of the rear-most branches as well. 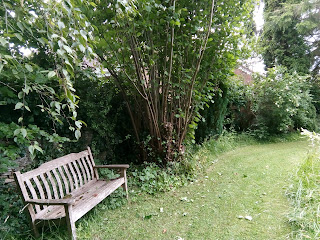 This might not have made much of a difference to the front view, but you might just be able to see that there is now quite a lot more light towards the back, which makes the bench feel a bit more open and welcoming.
In doing this work, I also discovered a poor struggling Pyracantha against the fence, which had been rather smothered by the hazel growth, so I tied that in to the fence and hopefully it will now have a chance to provide a splash of colour down there.
Now, you might be wondering how much I actually removed from this hazel.
Answer: about a whole tree's worth! 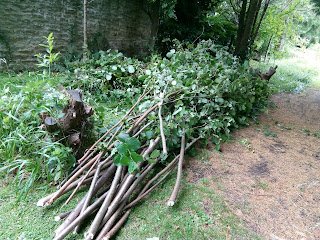 Here's my waste pile: in fact, there are two piles, one pile of the long straight trunks, and a second pile to the left, comprising smaller branches and a few wayward bits which I chopped off the larger trunks in order to make them easier to stack.
How long did all this take?
It took me about ten minutes to cut out the unwanted trunks, which includes a couple of minutes assessing the job and deciding which ones to remove: and then half an hour to clear away all this lot, trim them and stack them neatly for the owner to dispose of.
This is often the way with tree work! Ten minutes to do the job, and two hours to dispose of the corpse, as it were. 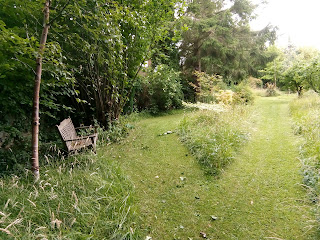 So now, in this garden, we have have a nice clear bench, which gets the sun, and on which people can sit without wearing a hard hat for protection: the neighbour is happy because the overhanging branches on his side have been removed: and the whole area generally looks more inviting and manageable.
Job done!
Did you enjoy this article? Did you find it useful? Would you like me to answer your own, personal, gardening question? Become a Patron - just click here - and support me! Or use the Donate button for a one-off donation. If just 10% of my visitors gave me a pound a month, I'd be able to spend a lot more time answering all the questions!!
Posted by Rachel the Gardener at 10:50