How to identify a flower if you have no idea what it is.

I was out with my Trainee the other day,  and we came across a garden plant which neither of us recognised.
Now, I often get asked this question, by younger gardeners who live and die on the internet: how do you find out what a plant is, if you don't know what it is called - where do you start?
So here is my entire process, for naming a plant using only the internet.
Firstly, we looked at it: did it remind us of anything? I thought it might be Astrantia, because the leaves looked like Astrantia. 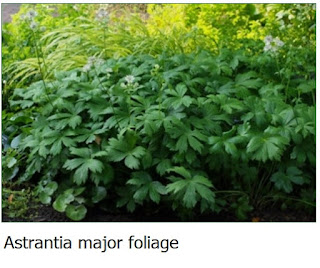 This - left - is what Astrantia foliage looks like, and it was about the right size: the leaves were as large as the palm of my hand, and the whole thing was waist-high: bearing in mind that the pot was a large one, so that adds a foot or so to the height.
But then I looked at the flower, and it was orange.
Hmm, probably not Astrantia then, because Astrantia come in shades of purple through to dirty white, I've never seen an orange one. But the leaves looked really Astrantia-like.
Did we panic, scream, and run around crying "What is it?! What is it?!"
No, we did not.
First and most obvious thing, we looked in the pot to see if there was a label.
You'd be surprised how often the Garden Owner leaves a label in the pot. I never advise my own Clients to do this: the labels degrade over time, they shatter, and then you've lost them forever. I always recommend keeping the original label in the Garden Journal (what do you mean, you don't have a Garden Journal? Everyone should have one! Write down all the plants you have, make notes of new ones which you buy, what they cost, where they came from: clip the receipt into the Journal in case they die and have to be returned for a refund: take photos of your garden every so often, print them out and stick them into the Journal to remind you of what looked good, what looked bad, where the gaps were, which areas could do with improvement, etc) for reference, and making new labels to put out with the plants. This helps to avoid the "fruit salad" effect of many little bits of brightly coloured plastic in the garden.
In this case, alas, no label.
Next step: ask the garden owner. "Excuse me, we were just admiring this lovely thing here, what a super/lovely/unusual colour/shape [mix and match as appropriate], can you tell us what it is?"
This approach is less successful if "one" is working there at the time, because when "one" is a Pro Gardener, "one" is rather expected to already know all the plants... but nevertheless, I have been known to ask the Client, I have no shame!
In this case, no Garden Owner available.
Right, research time: take photos. Take several, to ensure that they come out - photos of the flower, the back of the flower (the sepals, on the back of the petals, are often useful for ID) the foliage, the stems, try to get overall pics of the size and proportion of the plant, along with some close-ups to give you some useful detail. If possible, put something in the photo to give a sense of scale. 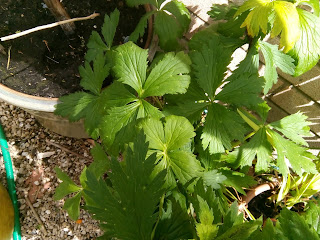 Here's the foliage - see what I mean about it looking like Astrantia? 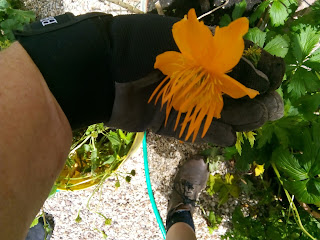 But here's the flower, and because I have my hand behind it - to make it clear in the photo - that also gives us a sense of scale:
Quite exotic, isn't it?  Definitely not Astrantia.
Back at home, we turn to google or any other search engine.
My first thought had been Astrantia - I was fairly certain that they did not produce orange flowers, but heyho, always worth checking the obvious candidates first, so I typed in
"Astrantia orange flower"
...and then clicked on "images". As I thought, the foliage was similar, but Astrantia definitely don't come in orange.
Next I tried
"orange flower long stamens"
because that seemed to be an unusual and possibly definitive part of the flower. I got lots of lilies. Then I looked again at the photo, and realised that the long parts were not stamens at all (If you're not sure what a stamen looks like, google it now!), so I tried again with
"orange flower long thin petals".
This brought up some interesting pics, but not what we wanted. I wondered if it was something exotic, but it was growing outside, and we've had all sorts of weather this year including four bouts of late frost, so I discounted tender, exotic things. I tried
"orange flower annual"
..because I don't grow annuals myself (what a waste of money! Much better to buy a plant once, and enjoy it for years, than to have to keep re-buying it year after year...), and therefore I don't know much about them, and it's entirely possible that it's an annual that I simply don't know.
This search threw up loads and loads of orange flowers, mostly Calendula (Marigold), Zinnia, Gazania etc, all the usual suspects - even I know those ones! - but nothing with the fringe of long thin petals.
OK, possibly not an annual then, let's try perennial:
"orange flower perennial"
Aha! There it is! Trollius! Same flower, with a layer of skinny petals shooting upwards.
Now I can put "Trollius" into google, and the one that looked closest was Trollius chinensis. So I put that into google, and yes, that looked a lot like it. I then altered the search terms to
"Trollius chinensis foliage"
... and looked closely at the leaves - yes, that's definitely it, yay! Returning to search for just Trollius chinensis, I scrolled down through the images to see if I could find one that was identical to our mystery plant, and I'd probably go for 'Golden Queen'.
So there you have it, this is my "process" for identifying an unfamiliar garden plant, and I hope that it inspires you to search for the names of unfamiliar plants.
Just remember that a huge proportion of photos on the internet are wrongly labelled, so don't look at anything on Pinterest, Facebook, or any of those "amateur" sites: go for plant nursery websites, on the grounds that anyone selling the plant is duty bound to label it correctly!
Did you enjoy this article? Did you find it useful? Would you like me to answer your own, personal, gardening question? Become a Patron - just click here - and support me! Or use the Donate button for a one-off donation. If just 10% of my visitors gave me a pound a month, I'd be able to spend a lot more time answering all the questions!!
Posted by Rachel the Gardener at 08:33