I've just had an email from Lisa (*waves enthusiastically*), who recently planted two very nice Salix Kilmarnock trees, and had a couple of questions about annual pruning, and rusty leaves.
Here's a photo of one of them: 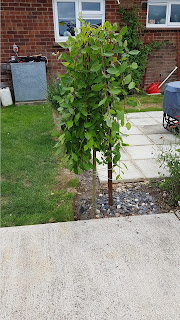 Lisa says that when she bought them, they came with instructions to prune the branches down to 15cm (errr, errr, 30cm is a foot, so that'll be 6" in real life) just after the catkins have fallen, which would presumably be in late spring.
She didn't do so, and is worried that she's left it too late, so what should she do?
My advice is to leave them this year - they look fantastic, perfectly demonstrating the "light airy waterfall" which all Salix Kilmarnock owners should be aiming for.
I personally think that pruning it all back to 6" is a bit harsh, but willows are very fast growing, and if Lisa had chopped this one back as instructed in about April or early May, it would probably be very nearly back to this stage by now.
The idea behind the hard prune is to keep the tree airy and uncluttered: left to their own devices, these sweet little grafted trees do tend to morph into massive leafy bushes, lacking both shape and style, so a firm hand is often required.
If it were mine, I'd leave it for this year, but next year I would prune probably about half of the branches down to the suggested 6". And when I say half, I mean taking out one, leaving one, taking out one, leaving one... I don't mean chopping off all the ones on one side or the other!
Then, the following year, I'd prune out the ones that didn't get done this year, and I would repeat this process every year. This would have a net effect of creating a tree where none of the branches are more than about two years old, so it should remain small and shapely for many years to come.
Just to remind anyone who hasn't read any of the many other articles I've written on this topic, these trees are GRAFTED, that means that the single upright trunk belongs to one species of willow, and the graceful weeping branches at the top belong to a different species.
So the tree will never get any taller, it will just get thicker!
This is the second reason for an annual prune: with grafted trees, it's important to be able to see the base of the tree clearly, because they are little devils for sending up suckers from the rootstock, ie the bottom half. Sometimes they are true suckers, sprouting up from soil level: sometimes they are buds on the main single stem. But every one of them must be removed as soon as it is seen, otherwise your shapely weeping tree will turn into a massive upright "normal" willow before you can say lickety-split.
Lisa's second question was about rust on the leaves: this is a fungal infection, which causes discoloured spots on the leaves. There are thousands of types of Rust, some are specific to a particular species, some are less fussy. So I don't know which type of rust is infecting Lisa's trees, but all rusts are fungal, they spread by spores - so they are pretty much everywhere, in the air - and their idea of a good time is to find somewhere moist and warm so that they can replicate. Something like Athlete's Foot, but for trees.
Their favoured conditions tend to occur in a tree with dense branches, which has been watered from above: sprinklers are a particularly bad way to water trees (or anything, for that matter, but I'm a bit scathing on the whole subject of using sprinklers to water your garden, so don't get me started!).
So how can we help? We can help by maintaining a good air flow within the tree, which means pruning it regularly to prevent it getting too dense. We can also help by clearing away weeds and other growth around the base of the tree:  and by watering only from below.  Obviously we can't prevent rain falling on them, but we can avoid extra unnecessary "rain" !

If there are only a few leaves with rust spots, it's worth gently picking them off and destroying them - don't put them on the compost, otherwise you will be spreading the spores wherever you use the compost. Put them into your council green waste wheelie bin, or take them to the dump. Or burn them, if you are lucky enough to have space for a bonfire.
And in autumn, make sure you clear up all fallen leaves - again, bin or burn them, don't put them on the compost -  and leave the ground absolutely bare underneath them, to help prevent the spores from multiplying and making it worse next year. It's also worth adding a thick layer of mulch around the base of the tree, once you have cleared up the last of the fallen leaves: this will prevent any spores on the soil from being splashed back up onto the tree.
If you find that rust keeps reoccurring, it might be necessary to spray the foliage with an anti-fungal agent: but it's important to start spraying as soon as you see any sign of rust: or preferably, before any of it appears. Those of us who strive to be organic and not use unnecessary chemicals will have to make a decision whether to spray early, or to wait, and hope that it won't be needed.
So there you are Lisa, hopefully that has answered your questions!
If you want to read more about these trees, you can either type the word Kilmarnock into the Search box - which is at the top left of the screen, in the black banner. Or you can read this article, which in turn refers to several of the others!

Did you enjoy this article? Did you find it useful? Would you like me to answer your own, personal, gardening question? Become a Patron - just click here - and support me! Or use the Donate button for a one-off donation. If just 10% of my visitors gave me a pound a month, I'd be able to spend a lot more time answering all the questions!!
Posted by Rachel the Gardener at 17:08