I had an email the other day from Karen ("Hi, Karen!") asking for my opinion about her contorted Hazel.
Now, regular readers will know that Curly or Contorted  or Corkscrew Hazel (Corylus avellana 'Contorta') is not my favourite curly wurly shrub or tree: that honour would always go to Contorted Willow, which I think looks better, it certainly grows faster, and is a lot easier to manage as - not being grafted - it will never revert to being straight, as it were.
Also, the leaves of the Willow are normal willow leaves, whereas the Hazel leaves are as contorted as the stems, which I think makes them look a bit diseased. So Hazel is fantastic in winter, not so good in summer: whereas the Willow is fantastic all year round, plus is easier to manage. So that's why I don't really care for the contorted Hazel.
But I shall put all that aside for Karen's question!
(And anyway, are you ready for this? Terrible confession: I actually do have a very small contorted Hazel in my own garden, it's a purple leaved  one, and I looooove purple foliage!)
She had a corkscrew Hazel in a pot, and decided to set it free, and plant it out in her garden, but alas, it is not looking spectacular. In fact, it's looking a bit poorly, Karen says that it has scale insect, ants are present and some of the branches are blackened.
So let's look at those three issues. Firstly, the scale insects.
Here's Karen's picture of the scale insects: 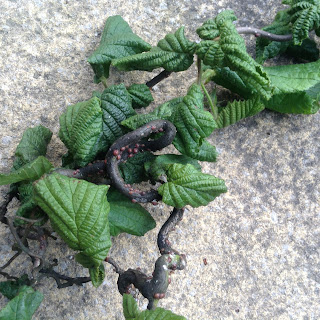 If you don't know what scale insects are, they are tiny hemispherical creatures which clamp themselves onto the branches of vines, bushes, etc.
Their hard carapaces protect them from being picked off by birds or other predators, and under their protective shells, they are secretly sucking the sap out of the plant, and slowly killing it.
In this photo, left, they are small light brown dots, there are several clusters of them along the dark grey stems of the curly Hazel twig.
Once they get settled in, they don't move around - they dig themselves in to the branch, and settle down to a nice sedentary life of sucking sap, and producing eggs.
Some types of scale insect (there are something like 8000 species!) secrete honeydew, in the same way that aphids do, which means that where there are scale insects, there are also ants...
Secondly, ants. I am dead against ants on plants, they do huge amounts of damage because where there are ants, there will be a nest, and that means excavation of the soil. So although the ants galloping up and down the stems might not appear to be doing much harm, they are bound to be nesting somewhere nearby.  And if the plant is in a pot, as this one was for many years, then they are probably inside the pot, ruining the roots by creating open passageways - "galleries" - which allow air to get to roots, which then kills the roots.
Also, ants need food, and they particularly love aphids because they can "farm" them for the honeydew, so where there are ants, you will often find aphids, which means sticky mess from the honeydew, more ants, and aphids ruining the leaves, to accompany the scale insects ruining the twigs.
And then there are the black bits: 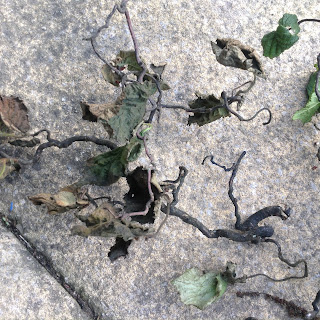 This - left - is Karen's photo of some of the dead parts of her Hazel, and I can confirm that yes, they are dead bits.
There is nothing to do with these branches, but to prune them out entirely, as Karen has done.
If you are nervous about doing this, start at the tip of a deal-looking branch, and cut off just the last couple of inches. Look at the cut end - is it brown and dry? Or is it green and moist inside? If it's green, or pale coloured, and moist, then it's still alive, hooray! Do not cut any more off.
But if it's brown and dry, then it's dead: cut off another few inches and check again. Sometimes, if you do this, you will work your way half way along the supposedly dead branch, then find that there is actually live wood there: what a good thing you didn't chop the whole branch off, then!
Of course, sometimes you carefully snip your way all the way back to the main trunk, and it's dead all the way, so you think "Huh, I could have done this in one single swipe instead of wasting five minutes carefully mincing off a small piece at a time" but there you go, that's how you learn: after you've done this about a hundred times (as I have) you start to be able to recognise dead wood when you see it, and you can be brave and go in for the kill right at the start. But if you are not sure... take your time, and do it in small stages.
Why were there dead branches on the tree? Who knows: it could have been damage, the very act of lifting an established shrub or tree out of a pot is quite a physical thing, and it's easily possible to accidentally snap a couple of branches - and with a contorted tree, it's often hard to see that something has been damaged.
Or it might be the shock of being planted: sometimes plants respond to being freed from their pots by romping away like good 'uns: sometimes they scream in horror and lose a few branches or stems, just to frighten you.
Either way, it will probably recover, as long as it got a good watering when it was first planted out, and maybe again if we have more of this very drying, windy weather.
Getting back to the lovely scale insects ("not"), how do you deal with them?  It's best to remove the adults, I just wipe them off with a gloved hand: they can often be scraped off en masse, which is strangely satisfying. Once they are dislodged from the branch, they will die: and often when you do this, if it's a really bad infestation, you'll find that a lot of the shells are dry and dead anyway, so you are not being quite as much of a mass murderer as you thought.
This will remove the bulk of the problem, but there will still be any number of eggs and crawling larvae still on the plant, so once you find scale insects, you will have to keep re-checking, and scraping off any new ones that you find. Eventually, this war of attrition will get rid of the pest.
The problem is that many plants, especially vines, have lots of nooks and crannies where the little blighters can lurk, unseen, and out of reach, but if you don't want to spray your plants, then the only option is ceaseless vigilance, which will at least reduce the burden on the plant, even if you can't completely eradicate them.
Personally I apply ant powder: it gets rid of the ants, and although it is not one of the suggestions for killing scale insects, I find that a good dusting of ant powder results in a lot of very dry scale insects, which can be easily scraped off.
The non-eco methods involve applying systemic bug killer to the plant: this makes the sap poisonous to sap-sucking insects, so when the greedy little scale insects start sucking, instead of "slurp, slurp, burp" it's more like "slurp, slurp, aaaaaaaagggh, gack, aaaaargh!" and they die. Takes a while, a few weeks, and you still have the dead shells or cases on the branches, so you'd need to scrape them off, otherwise you won't be able to see if there are any new ones coming along. So the best regime, clearly, is to scrape them all off first, then spray the plant with a systemic bug killer.
Hopefully Karen will find that in a few weeks, her Hazel tree has recovered from the scale insects, recovered from the shock of being transplanted, and is growing nicely!
Did you enjoy this article? Did you find it useful? Would you like me to answer your own, personal, gardening question? Become a Patron - just click here - and support me! Or use the Donate button for a one-off donation. If just 10% of my visitors gave me a pound a month, I'd be able to spend a lot more time answering all the questions!!
Posted by Rachel the Gardener at 07:30