I've written several articles in the past about this small tree, which is extremely popular in smaller gardens: if you look at the top left of the screen, you will see an orange blob and, next to it, an empty box with a magnifying glass icon in it. This is the Blogger "search" button, and if you type Kilmarnock into it, it will pull up a list of all of them.

Back in July 2014 I told the story of how I'd spotted a very neglected Salix caprea 'Kilmarnock' on a local industrial estate, and had done some sneaky guerilla gardening to rescue it.

Well, not really "guerilla" gardening, I spoke to the groundsman and obtained permission to do it, but it sounds impressive, and oh-so-trendy, to call it guerilla gardening... anyway, the tree was rescued from total reversion, and made an excellent recovery.

Then a couple of people asked me for more detail about the pruning,  so I wrote another article about Pruning of Small Weeping Trees, which covered Weeping Pear, as well as our Kilmarnock.

In addition, there was a question about growing a weeping Kilmarnock from seed, which is unfortunately not possible, as I explained in this post.

Today, there are two questions in my inbox, both about pruning, so let's talk about Kilmarnocks again!

The second question - dealing with the easier enquiry first! - is from Richard ("Hi, Richard!") who asked why I cut below a twig that's pointing up and out, with a side order of "do you cut at the node?"

The reason for cutting below an upward-springing twig is to preserve the waterfall shape - if you cut just below a twig that is going inwards or sideways, you are worsening the congestion within the bulk of the tree, and the idea is to have each individual branch continually springing outwards, such that the trunk of the tree has plenty of air circulating around it.


Like so many things in gardening, it is easier to demonstate than to describe, so I shall have to resort to a back-of-envelope sketch to show what I mean: 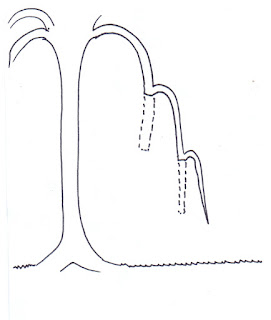 Here's a cross-section, if you can imagine that your tree has been cut in half.

You can see that by cutting just below the outward-springing twig each time, the branch goes outwards in steps, rather than going sideways (congestion, ugly) or inwards (congestion, loses nice waterfall shape).

In a perfect world, each branch springing from the top of the tree would fall gracefully, complete and uncut, to the ground but - rather like those pruning diagrams in RHS manuals - real life is rarely as neat and tidy as we would like. Most weeping trees send twigs pinging out in all directions, so they need a bit of help to achieve this sort of shaping.

The branch in the diagram above has, you might notice, no side twigs at all - again, something which rarely occurs in real life!  There is always a balance to be found, between removing sufficient wayward twigs to get back to the "light, airy waterfall", and removing so many that your tree looks sparse and unhappy. This is a skill which comes only with experience, but all this means is that I can whizz round and do the job really quickly, whereas someone less experienced would just do it rather more slowly - with this sort of pruning, it is always a good idea to step back every few minutes and assess what you have done.

If you now go back and re-read the article about Pruning of Small Weeping Trees, it should make more sense.

And with regard to the "cutting at the node" aspect, then yes, cutting directly underneath an outward-springing twig or branch, without leaving a stub, is indeed cutting at the node. Leaving a stub is a bad idea, they tend to die off and then there is the risk of die-back. It is always better to make your cut as close as you can to the underside of the springing twig.

At this point I will also add a reminder about avoiding pudding bowl haircuts: don't ever chop off all the branches at exactly the same height above the ground. It looks terrible! Take a bit more time, to go round and shorten - if necessary - individually. This is one of those times where a "ragged" finish is actually something you should strive to achieve, as it retains a natural look. Weeping trees are not topiary, and they look "wrong" if they are chopped a regulation 10" from the ground.

I am not a big fan of cutting the tips of weeping trees - all it does is promote that twig to produce usually two or more new twigs, often pinging out in odd directions - but what are you to do if the twigs are sweeping the ground? My usual answer to this dilemma is to go back up that particular branch, and rather than chopping a few inches off the tip, I go back maybe a bit further and find a twig which is springing outwards (as per the sketch above) and cut the over-long branch just under that springing twig. This preserves the overall shape, and that particular springing twig will then have several months of growing and elongating before it starts to get too close to the ground. Again, easier to demonstrate than to describe.

Right, now a big wave to Brenda, all the way across the sea in Georgia, (*waves enthusiastically*) who asked me about two Kilmarnocks which were purchased several years ago, and which are no longer performing as required.

The first one is described as being "alive, but a twisted mess" which suggests that it needs a good going over. Again, I'll suggest checking out the Pruning of Small Weeping Trees post, which details how to start with cutting out dead wood from the top, then thinning out what is left in order to get the form back.  This might well solve the problem, and it would be lovely to see a "before" and "after" photo!

Brenda says the second tree "no longer looks like a willow" and it has no catkins on it anymore. Without photos it's a bit hard to diagnose the exact problem, but it is possible that the top of the tree, the weeping part, has died off, and the rootstock has taken over. Usually, Kilmarnock are one type of Willow (a weeping type) grafted onto another type of Willow (non weeping) so Brenda's tree is probably now a "normal" willow tree, which would explain the lack of catkins, and which means that it will grow as big as an ordinary willow, ie far too big for a domestic garden. If this is the case, it will have to be dug out and disposed of, I'm afraid, but please do send me some photos of it before you take that drastic step, just in case!

Unfortunately, it is not possible to propagate from the "good" one, as Kilmarnock are grafted trees - two types of tree stuck together for our delight and delectation. It is certainly possible to grow a new sapling from the catkin-rich material, but it won't look anything like the small, neat, shapely tree that it came from.

There, I hope that answers those particular questions: do feel free to ask if you would like any further info - and I will try to take clear photos, next time I am presented with a weeping tree to prune!

And finally, as a general observation,  if you want a small, pretty, tree for a small-ish garden, I have no hesitation in suggesting Amelanchier lamarckii (pronounced Ammell-ON-sheer) which is a small, elegant deciduous tree, they have superb white flowers and interesting coppery-coloured foliage in spring, coloured berries in summer if you are lucky, and good autumn colour as well.

Update: Brenda later sent me photos of her actual trees, so here is another article, specifically dealing with them.

Posted by Rachel the Gardener at 07:22