"Woad's the stuff to show, men: Woad to show your foe, men:
Boil it to a brilliant hue, then rub it on your back and your abdomen..."

Leaving historical inaccuracies aside, Woad is a real plant, the scientific name is Isatis tinctoria: it looks rather like a cross between Solidago (Goldenrod) and a rather top-heavy Oilseed Rape (Brassica napus), being a rather untidy, upright, waist-high plant with clusters of small bright yellow flowers at the top. 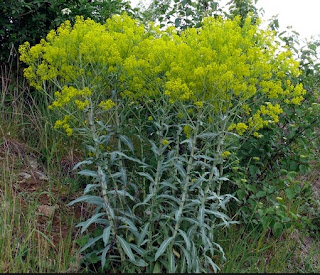 See what I mean?

Apparently it is occasionally found growing wild in England, mostly on wasteland, which I found quite surprising: you will be looking more closely at the weeds next time you go out walking, won't you!

I know I will.. I'm certain I've seen this plant growing out and about, so it will be interesting to find the plants in question and to identify them.

Anyway, back to the plot: I was asked last year if I would germinate some Woad seeds, for a chap who makes his own dye, and who had struggled to find these plants for sale.  He had managed to buy some seed, but he didn't have much experience of growing plants from seed, so he asked me if I would kindly have a go for him.

Always game for a challenge, I said I would be delighted to give it a go, and earlier this year I started a couple of sets of seeds: one set indoors, one set outdoors. When working with unfamiliar seeds, it is usually best to split them up and try different batches in different conditions, taking notes all the while. 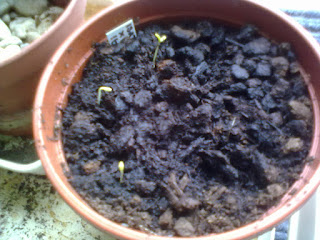 About a month ago, much to my delight:

I love it when the first tiny seedlings start to appear!

This is the indoor set, sitting right by the window so they get plenty of light. This is the outside pot (right) as it is today: they get more light, but obviously it is much, much colder outside, and the indoor seeds germinated a month earlier than this one to the right.

This proves that Woad seeds are sensitive to temperature when it comes to germination, so already I have learned something about them.

Now all I have to do is grow on a dozen of them, until they get to a decent size!
Posted by Rachel the Gardener at 10:02