Love 'em or hate 'em, Photinia are here to stay, and "Red Robin" is the star of the Photinia clan.

If you don't know what they are, they are an evergreen shrub, strong growing, fast growing, but manageable: they can be pruned hard and will recover well, and they can be used as a statement stand-alone shrub or - more commonly - as a really good, nice-looking informal hedge.

Why do I say that "Red Robin" is the star of the show? The new foliage on this one comes up bright red, that's why: making it even more perfect for hedging, or for screening: positions where you are likely to want to chop a bit off them, from time to time. Because any such chopping, no matter how inexpert, results in a flush of new red leaves. 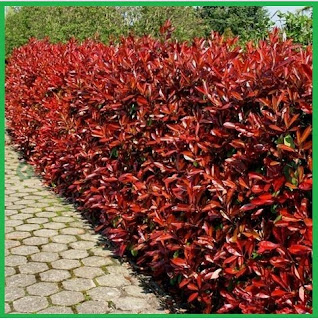 This - left - is what you might call the Ultimate Red Robin Hedge. Clipped to perfection, allowed to re-grow to perfection, photographed on a bright day, with a nice clear paved area for contrast.

But even on their worst days - unclipped, un-managed - they still make a good, colourful, interesting hedge, or specimen shrub.

They are naturally quite untidy: to create an informal hedge or screen,  I would buy enough plants, in 2litre pots, to be able to space them a good 2-3'' apart.  Don't waste your money buying bigger ones: it's been proven again and again that enormous 8' tall ones, which can cost £60-£150 each, will be overtaken in about 3 years by the £6.99 ones you bought at the garden centre. And the number of "big" ones which fail to thrive, and have to be replaced (if you were clever enough to keep the receipt) is very high.

Now we get to today's question:  I was asked recently how to go about creating a screen against a rather ugly wall, when the garden owners only had five plants.

Resisting the urge to say "well go out and buy some more, then!" I suggested they place the pots in position, spaced out along the wall: but instead of using a tape measure to position them mathematically equidistant (ie  at perfectly even distances apart, which is what we normally do), I suggested that they swivel the pots until they look "best", ie with the widest spread. Then, we would prune off any biggish branches at the back of each one, such that they can sit more closely against the wall, without damaging themselves.

At this point, I should say that I would never plant shrubs right slap bang up against a wall or fence, for a couple of reasons, which are covered adequately in this article about Why We Don't Plant Stuff Immediately Adjacent To Walls.

So, back to our new hedge: I then suggest that you plant out these five, then take all the stuff you pruned off, and for each pruned twig, remove most of the leaves, from the bottom (cut end) upwards, and shove them into the ground as far as you can - 6" or so, 12" preferably. If you are lucky, many of them will grow! Free plants, yay!

Here are the General Guidance tips for this job:

When to prune: any time that suits you.  If you want to try growing on the prunings, make sure the soil is not frozen. The fresher the cuttings, the better, so put the prunings straight into a bucket of water - cut end down - until you have finished the planting: they'll be fine there for a day or two, if you don't have time to do it all on the same day.

How to prune: use secateurs (technically, use bypass secateurs rather than anvil secateurs. They are usually labelled, or look up the difference on google). Cut out the branches that you don't want, as close to their "main" stem as you can. Don't leave a couple of inches of sticky-out stub: it's untidy, and the stubs often die anyway.

When to plant: when you have the time and energy, as long as it's not snowing, or the ground is frozen.

How to plant:  Dig out a good big hole for each one (don't just chip out a pot-shaped hole) and sit the pot in it, to check that you have dug it big enough and deep enough. Then dig a bit deeper, to rough up the bottom of the hole. Remove plastic pot (don't laugh) (I've seen it done...), position the plant in the hole, replace soil all around it, firmly but not mercilessly: then water well, even if it all seems quite wet enough already.

Take photos, make a note in your garden journal (what do you mean, you don't have a garden journal? Go out and get one!) as to how much they cost, and where they came from: stick in any labels and the receipts - just in case. It's very handy to have a reminder of these things. Remember to water them once a week (more if it's hot and dry or windy)  through their first summer, and make each of those waterings a good one: really drench them, don't just sprinkle a few drops and think that will do the trick.

The chief beauty of these plants is the new, red, foliage, so about three times a year, it's worth pruning them back (and down) a couple of feet, in order to promote a flush of new growth.  After a few years, once they are well established, you can start a regime of cutting out about one-third of the oldest (thickest) stems, down to ankle height. Really! Sounds brutal, but it works. This prevents the shrubs getting over-congested, and promotes strong new growth.

And that is pretty much it, for planting a screen of Photinia: quick, simple, and will be a thing of beauty for years to come!