Continuing my short series of articles about how technology is impacting our gardens: I've written about aerial views, and about lighting and PIR sensors, and I realised the other day that the increasing number of electric cars is going to lead to changes, as well.

Oddly enough, this train of thought began when a workman arrived at a house while I was scrubbing the block paving front drive: a job which I have written about here, and again here: 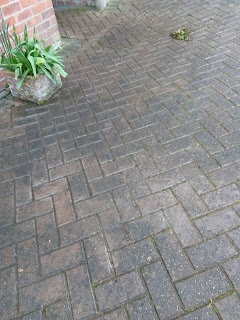 It's a horrible job, but it's only once a year, usually, and it makes a huge difference.

So there I was, scrubbing away with the long-handled wire brush, and Simon the Electrician commented, in passing, that his own block paved drive was stained with diesel,  which had leaked from his van.

He asked me what he could do about it: would jet-washing help?

I replied "Nooooo!" because jet-washing is the worst thing you can do with block paving, as it blasts all the sand out from between them, leaving them jiggling like an 8-year-old's loose tooth.

In case you didn't know, this sort of (expensive) block paving is not laid on concrete: the blocks are loose-laid on sand. The skill is in the installation, to get them tightly packed, but to allow enough room for them to move very slightly, as vehicles drive over them: if they didn't have this room to move, they'd crack, and be ruined. It's one of the better driveway surfaces, ecologically speaking: rain can seep down between the blocks and dissipate, without flooding the house.

The worst sort of drives are solid concrete ones - or even worse, the ones where they lay the concrete then press a pattern former into it, so it looks like block paving - but has no drainage at all. Ugh. I can't tell you how many times I've seen workmen doing that sort of drive, and invariably they take it right slap bang up against the house/garage, so the water has nowhere to drain away.

Anyway, getting back to Simon and his stained blocks, I suggested lifting the stained ones, and swapping them for some unstained ones from random places around the edge of the drive, or in corners that are not particularly visible.

But of course I had to point out that if the vehicle had leaked previously, it would no doubt leak again.

"Aha!" said Simon, simply. "I now have an electric van!" Sure enough, he had a shiny new Nissan, I think it's an e-NV200: and with no diesel to leak, it shouldn't stain the drive.

This led on to the thought - I should point out here, that scrubbing block paving is utterly mindless work, so my mind tends to wander, while doing it - that electric vehicles were going to have an influence on our front garden design, in two ways.

The obvious way is that more people are going to need to pave over their front garden, in order to get their electric vehicles close enough to the charging point.

Otherwise, you can imagine a new crime of charge-jacking, where people drive their electric cars silently around the midnight streets, find a car with a long lead snaking out from the house across the pavement, and unplug it, plugging the lead into their own vehicle. Six hours later, they drive silently away, fully charged, leaving the householder wondering why they spend so much electricity on charging their car, and yet it never seems to have much charge in it.

But there's a secondary implication: now that vehicles are going to be much, much less prone to leaking diesel, oil, etc, more people are going to want to choose to have a smart, decorative surface to their new charging/parking bay.

Oh no! Not more block paving! Quick, someone, invent something practical, but easy to clean!

Did you enjoy this article? Did you find it useful? Would you like me to answer your own, personal, gardening question? Become a Patron - just click here - and support me! Or use the Donate button for a one-off donation. If just 10% of my visitors gave me a pound a month, I'd be able to spend a lot more time answering all the questions!!
Posted by Rachel the Gardener at 10:04