Salix Kilmarnock: is it safe to plant one by the house? 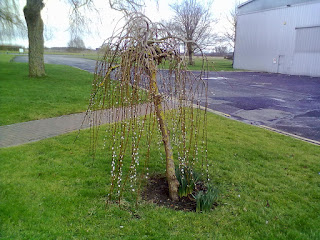 I've written several articles about this grafted tree:  just type the word Kilmarnock into the search box - top left of the page, in the black strip -  for a full list of them.

Well, earlier this week, another question arrived, on this topic.  Stuart says:-

"As complete novice gardeners, my wife and I have just purchased a 'Kilmarnock willow' on the advice of our local nursery.
It is for an area at the front of the house which never sees much sun, and is a heavy clay soil. It always has a high water retention, and we were puzzled as to what could grow there.
The area is about 1m wide from the side of the house, and 3m long. So the willow would sit perfectly, however, having seen a previous question about the roots, do you think this could cause issues with our home foundations. Our home is a new build, not sure if that matters, but best include it.
The willow is in a pot at the moment. And is around 1.5m tall.
If it won't work here, we could put it in a large pot in the back garden, but we are still clueless as to how we fill this shaded clay area at the front."

There are several points to mention here, in no particular order:

1) Roots. It is always wise to consider roots, when planting trees. Willows in particular have a reputation for invading drains, in their search for water, so it's never a good idea - generally speaking - to plant any sort of willow too close to a house, or a building of any sort.

Salix Kilmarnock is a bit of an oddity in this respect: because it is a grafted tree, and the upper part is very small (compared to a "natural" willow), the roots don't need to grow to full size to support it, so they can be planted in, for example, small front gardens. However, if you read some of those other articles I've written, you'll learn that one of the problems with grafted trees (indeed, with any grafted plant) is that of "reversion", where the rootstock sends out new growth which, if unchecked, can take over the whole plant.

So, a case could be made that it is never "safe" to plant any sort of willow tree too close to a house, just in case the owner fails to notice it trying try revert, until it has grown into a proper tree and possibly damaged their drains.

Again, to learn more about this topic, type the word "reversion" into the search box at the top of the page.

2) Clay soil - the answer to this problem, Stuart, is to "improve it". How? By adding coarse material such as sand, or grit, or farmyard manure, or leaf mold if you have any. Tip it on top, and dig it in. I would not normally say this, but as it's a new build, you might even find it's worth hiring a rotovator for a day, or a half day, to bite into your nasty clay, and to chew it up, allowing the air to get, and then allowing the sand/grit/manure etc to be incorporated. Once you have done that, bring in some good topsoil, spread it on top, and then dig it in lightly - don't just leave it sitting on the surface, you need to get all these layers incorporated.

I don't normally recommend rotovators, because they destroy the soil structure. However, in a new build, there probably isn't much in the way of decent soil structure, so you have nothing to lose!

3) New build - I'm saying nothing about the build quality, but the soil is probably ultra-compacted from having the builders and their equipment stomping around on it for a couple of years, and may well have a ton of builder rubble under it as well, so that's another reason to improve the soil - break it up, turn it over, incorporate sand, add good topsoil.

4) Shady plants - type into google, or a search engine of your choice, the words "plants for shady gardens uk" and you will be presented with lists: this can be a really handy way to do the research, if  you don't know much about plants. They will usually also give you pictures!

As the house is a new build, it's probably pretty well bare: so if I were Stuart and Mrs Stuart, I'd look for a couple of shrubs to give some height, I'd maybe add some support wires or trellis to any fences, and get a couple of climbers going: I'd plant some perennials for colour, and in autumn, I'd buy a big bag of bulbs - daffodils, tulips, nothing too fancy - and add them, to give some early spring colour.  In other words, a bit of everything: and I wouldn't worry too much about "filling" the garden this year: just put in a

5) Water retention - again, it's probably compaction from when the house was built: the normal process is for all the good topsoil to be scraped off, and taken away. The builders then run heavy machinery all over the place, for a couple of years, which creates a "pan" or crust of compressed clay: once the houses are built, they bring back in a load of topsoil (which may or may not be the original stuff!) and tip it on top of the compressed sub-soil, leaving the pan unbroken. This often leads to problems of sodden lawns, waterlogged beds, etc. See point 3) for suggestions on dealing with this issue.

This is for several reasons: it means that the little tree will get a good start, as it will be in a pot full of nice fresh topsoil, rather than having to dig its way in through the compacted clay. It will also be raised up: this means that Stuart will be able to see it more easily from inside the house, plus it will be that much closer to whatever sun does find its way into the front garden. Just to remind you, if the tree is currently 1.5m high, that's as high as it will ever get (as long as you don't let it revert!). It will get wider, and the branches will get longer, but the tree itself won't get any taller.

And finally, if it doesn't do very well there, if - after a year or two - it starts looking a bit sad, then it is much easier to move the entire pot, or (if it's a really big pot) to take the tree out of the pot, move it, and re-plant it elsewhere.

There you go, Stuart, I hope this helps!

Did you enjoy this article? Did you find it useful? Would you like me to answer your own, personal, gardening question? Become a Patron - just click here - and support me! Or use the Donate button for a one-off donation. If just 10% of my visitors gave me a pound a month, I'd be able to spend a lot more time answering all the questions!!
Posted by Rachel the Gardener at 07:12