Rosa mundi: how to deadhead

Back in April, I wrote about Rosa mundi, and how to get it to flower spectacularly.

The secret, if you can call it that (especially after me talking about it quite openly on here!) is all in the annual pruning.

But I did also mention that I deadhead it ruthlessly, and I had a couple of people asking me exactly what this meant, how I did it, and when.

Alas, it's one of those things which is so much easier to demonstrate, than to describe: memo to self, I really must save up and buy myself a Go-Pro on a headband, so that I can make How-To videos. Wouldn't that be fun! You could watch me doing something, instead of having to read a thousand words on the subject. Mind you, you'd also have to listen to me describing what I am doing, and I should warn you, I sound like a cross between Mary Poppins and a chipmunk...

Anyway, deadheading: what is that, exactly? It means, carefully cutting off a spent (dead) flower, so that the plant does not waste energy making seeds, but instead, uses all that energy to either make more flowers, or to build up their supplies for the following year, depending on what sort of plant we are talking about.

How to do it: use sharp secateurs, and cut off each flower neatly - don't pull them off *faints in horror*. (Why? Because that will leave a nasty, ragged stump which firstly, looks ugly: and secondly, which is prone to rotting, and with roses we always have to be aware of the dreaded die-back.)

When to do it: when the flower is "going over" as we say - when the petals are going limp, and/or going brown. As soon as it no longer looks lovely.

Well, that's the traditional answer: but with Rosa mundi, there is a other little quirk: if  you leave the dying flowers in place, the petals get wrapped around the new buds, and can prevent them from opening. If it rains, then they turn into papier mache, and form impenetrable skins around the new buds, which definitely prevents them from opening!

The problem is that the petals of Rosa mundi keep their colour for a long time, so it is sometimes a tough decision, as to when is the right time to deadhead.

In a perfect world, you would go over the plant every day or two: in my somewhat less-than-perfect world, I am only in each of "my" gardens once a week, so if the Client is not able to do this task themself, then I have to do when I am there. 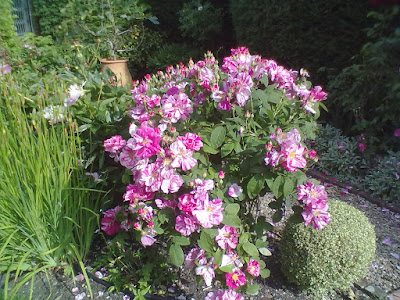 Here's one of "my" Rosa mundi bushes, photo take in late June, and at first glance it appears to be pretty much covered in flowers.

But a lot of them are fading, so it's time to remove them.

Out with the secateurs, and in I go, carefully snipping out every faded flower. 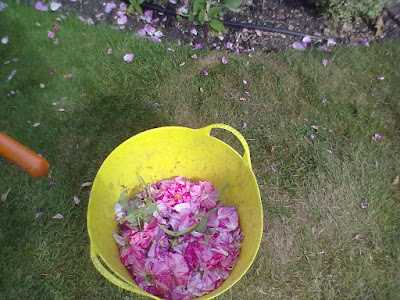 Here is the result, from this one bush: half a tub's worth of petals and a few odd bits: when working with roses, it is always worth carefully nipping out any dead bits which you might find, because dead bits lead to dieback, and we don't want that!

(In case you don't know, die back is a phenomenon - not exclusive to roses - whereby a badly-cut branch will start to rot, and the rot will "eat" its way backwards along the branch, and can - in the worst cases - kill the entire plant. A lot of the RHS training is all about avoiding dieback, by pruning and deadheading correctly.)

Now, what does the bush look like, after all that lot have been removed? 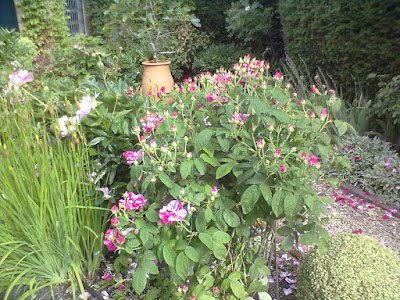 Here it is, 20 minutes of denuding later.

Now, at first sight, you might be thinking "Aiieeee! Looks terrible!" but you'd be wrong: because in a day or so,  those new buds will be opening, and now we will be able to see them properly, and appreciate them fully.

Without the deadheading, you wouldn't really have noticed all the new ones, and would have assumed that the flowering season was over.

But now we have a whole new set of flowers to enjoy!

Rosa mundi only flower once - one grand flush of flowers, lasting a couple of weeks, and that's it: but it's so glorious when it happens, that we forgive them!