Retraining a Rose which is too large

This story revolves around a standard Rose - that is, a rose which was originally trained as one single, upright stem, with a "lollipop" of flowering growth at the top.

This particular rose is a classic example of "wrong plant, wrong place" or - to be more accurate - "wrong plant for the wrong regime."

Why? Because it is a hugely vigorous rose: it sends up shoots at least 6' in length before they flower, which makes it enormously top heavy, and - because the "standard" part is already a good 5' off the ground -  the flowers end up way, way up there, out of sight.

It has also been a bit neglected, but we'll come back to that in a minute. 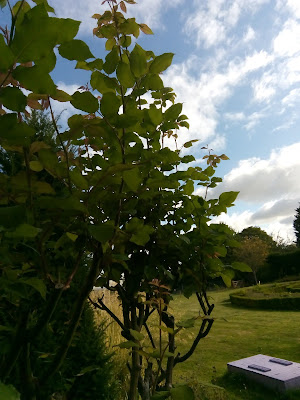 Here it is two years ago - right - and although it's a little hard to get a sense of scale, I can tell you that the bare stems at the base of it, in this photo, are at head height for me.

For the previous couple of years, I'd been doing the normal pruning regime for a standard rose, which is to cut down the top growth, in autumn, retaining a bundle of stout old wood, at the top of the main central stem.

But every year, the new shoots would be enormously long, those flowers would be out of sight,  no matter when I cut it.

I tried an early spring prune, as per the normal RHS recommendation: but that just encouraged it to grow all the more.

I tried a pre-bud light prune, reducing all the new shoots by half: but they just produced more 6' long shoots, so the flowers ended up being even further away.

I even tried leaving it to its own devices, but that just made it worse, it ended up taller than the large Yew cones next to it!

So I decided to re-train it: to turn it back into a "normal" bush shaped rose, and to do this, I would need to take away the standard shape, by removing the central stem.

In March of this year, this is what we had: 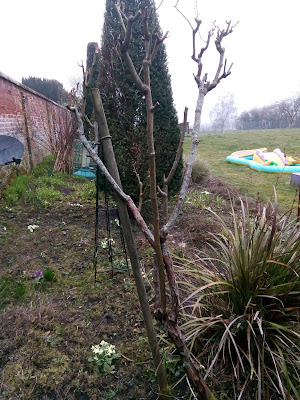 It has suffered some problems over the years, and has not always been pruned properly: you might just be able to see in this photo - left - that instead of one central stem, there are two.

One of them is strong, upright and vigorous, the other is much older, and crosses behind the strong stem, then forks into two.

So it's not quite a normal "standard" rose any more...

In fact, it is entirely possible that this was originally a grafted standard rose, and that over the years, the top growth has died, and the plant has reverted,  which means that shoots from the rootstock have taken over. It is possible that someone tried to train one or two of those reverted stems into being the new "standard" stems, not realising that firstly, they should only have left one of them, and secondly, that they were far too vigorous to be trained in this style.

But at least they tried...

Now, there is always a risk, when carrying out drastic pruning, to any plant: it might turn its toes up and die.

In order to reduce that risk, I decided to do this renovation work in two phases, with the option to stop after phase one.

Remember how I described this rose as having one strong, upright, vigorous shoot? Well, that's the one we'll be keeping, and we will be pruning off the older stem, at the point where the new one emerges.

My plan was to retain the one remaining stem as the new "standard" main stem, but my cunning Phase 2 plan, was to hope that the rose would throw out a lot of new buds, much lower down, so that I could then cut off this one remaining stem, at which point lo! and behold, we would have a bush rose. 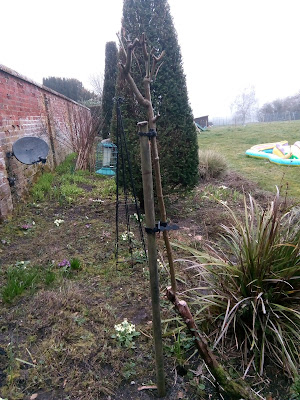 Here's the rose, Phase 1 having been completed.

As you can see, just one upright stem remaining, and that has been carefully tied in to the original stake, to avoid it snapping, as it no longer has the other stems to lean on.

The aftercare regime for this plant involved water, water, and more water: all through April, I watered it at least once a week, to encourage it to put up some new shoots.

Many people don't realise how responsive roses are to watering: they are strong, tough, plants, which don't need to be watered unless they are in pots: but when you want them to make a special effort, it is well worth splashing the wet stuff around, as it really gets them going! 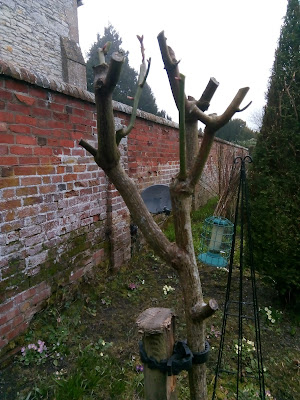 Here's a closer look - right -  at the top of the one remaining stem: as you can see, I have pruned it into the classic "standard head" shape.

If Phase 2 does not happen, then these short stubby stems will produce the massive 6' long growths again, and we will once more have a ridiculously high-flowering rose, but at least it won't be dead.

(Please note - in passing -  the correctly fitted tree tie: with a buffer between the stake, and the stem, so that one does not rub against the other.)

But if Phase 2 goes ahead, then the whole of this stem will be cut off completely.

Right, now we can fast-forward in time to this week: if you remember, all the above work was carried out in early March.

Hang on, I'll just get a shop-front, and a mannequin, and a time-lapse camera, to represent the passing of time......

OK, it's two months later and what do we have: 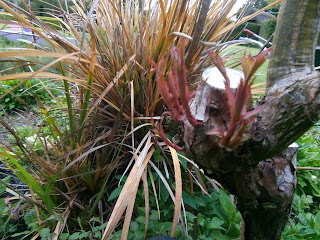 Here - left - you can see a whole handful of fresh pinkish shoots (slightly out of focus, apologies for that!) springing from the base of the cut, where I removed the oldest upright stem.

Actually, in view of the fact that we have just had the frostiest April since records began in the 60s (records of frost, we assume, because we know that weather recording goes a lot further back than that), I am holding Phase 2 back, until these little shoots have had a chance to grow a bit more, and to strengthen themselves.

At that point, off with his head!

Then, later on this year, I am confident that we will have flowers on this rose, but flowers which we can all see, without having to stand on a ladder!