How to edge your lawn - "Smartedge"

One of my Clients wanted to neaten a border, and I suggested that the easiest way was to install proper edging, which keeps the lawn out of the bed, and makes it much easier to mow alongside the slightly overhanging Raspberry foliage.

They agreed, which led to a discussion on the best type of edging to use: metal edging, as used in large estates and National Trust properties, is clearly the best and most durable: but it is very, very expensive.  It can be used for straight edges, and for curves: but it's quite hard work to install, and cutting it to length is not trivial! 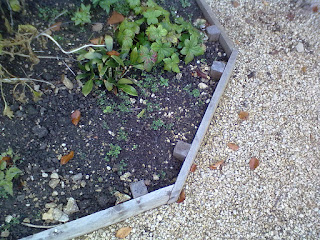 Then there are wooden strips - left - which look very cottagey, but can only accommodate straight lines: they will also need to be properly installed with pegs at intervals, to which the boards are nailed or screwed,  and in anything other then right-angled joints, you need to do some fancy cutting, as you can see here.

Also, they don't last forever... within just a few years, they will start to rot.

That leaves us with plastic edging, which can do straight lines, and can do curves as well: and that appeared to be the best option here - not least because it can be cut with a knife, or scissors.

So I sent my Client on a voyage of exploration of the internet, to find some plastic edging which they liked. 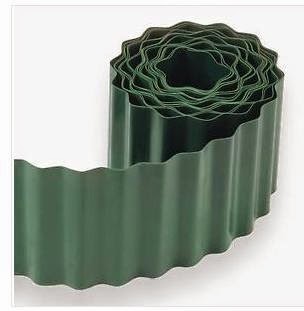 But whatever you do, I warned them, don't even try to use that hideous wavy plastic strip...

Yes, this stuff (right). It is the invention of the devil, I warned them: it never, ever goes in easily, it sags and droops, ruining the shapes of the bed: it looks as though someone has been round your beds with a dough cutter, and within a short time it will have gone brittle in the sun and been smashed to pieces by your mower, flinging shards of green plastic all over the garden.

Please, just don't use it.

I can't quite believe that the garden centres are still selling this rubbish, but alas, they are.

Luckily, my Clients heeded the warning, and one day I arrived at work to find a roll of Smartedge waiting for me.

Before we get onto that, here is the situation: a long, narrow bed, with a ragged lawn edge: 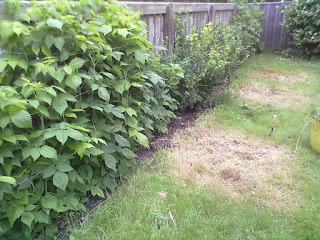 Those bald patches in the lawn are where the daffodils are, and this is part of the problem: the daffodil foliage can't be cut down until - usually - June, so it's not possible to mow this area for much of the early part of the year.

And this allows the edge to get a bit unkempt, as it is not getting any attention.

Hence my suggestion to put a proper edge on it. 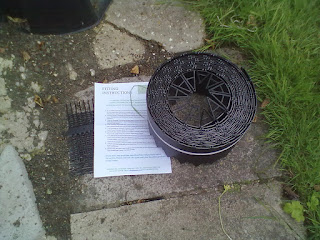 Right, let's take a look at this Smartedge stuff, then.

This is a product with two components: a length of nice, sturdy black plastic, with a frill of funny little plastic triangles along the top edge.

You also get a bundle of plastic pegs, intended to go through the triangles.

The plastic has large teeth at the bottom edge - you can just see them in this picture, right - which suggests you can position it, then bang it down into place.

Best not to: unless you use a half-moon edger, or a border spade, to dig out a slot for it (or, to phrase it less confusingly, to cut the edge of the lawn where you intend to install it, to a depth of nearly the full depth of the plastic) (there you go, that was clear, wasn't it?! *laughs*): if you don't do that, you will find that wherever you tap it down into place, the rest of it will pop up.

This is highly annoying. My Client had tried to install it before I arrived,  and was breathing heavily with frustration; even with two of us trying to hold it in place and tap it down, it just was not working.

So I sent him off to have a cuppa, while I cut out the channel. After that, it was easy enough to get the main strip of plastic in place: but those triangles defeated us!

Yeah, right *with sarcastic inflexion*.  Only if you can get the darned triangles into the lawn, that is.

My Client's lawn was apparently triangle-proof, as the soil was as hard as a rock, and the grass had a mat of impenetrable roots, just where the triangles were supposed to go.

We struggled with it for some time, then took the executive decision to cut off the triangles. After that, it was plain sailing, and no, the triangles were not at all necessary. The un-fringed plastic slid neatly into place, we gently tapped it down: 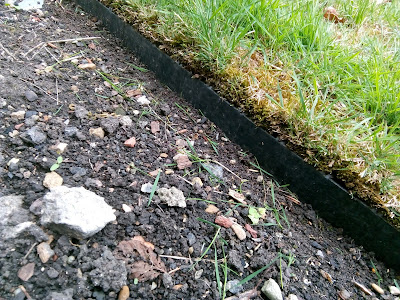 ..and here's a view from the business side, showing how it sits neatly inside the edge of the lawn - I backfilled some of the bare patches - and is buried to about half it's depth, in the soil.

If you look really, really closely, you can even see where we cut the triangles off!

Note, by the way, that the top of the plastic strip is BELOW the height of the grass. 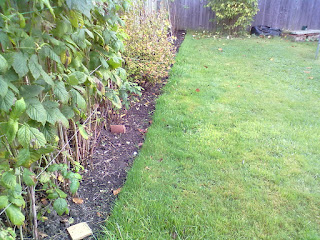 Here it is - right -  a couple of months later: you can see that the grass has now recovered, as usual, and the edge is straight, and neat.

The grass had been mown a few days earlier, but the edges had not been clipped, and that is another aspect of this strong, sturdy edging that appeals to me: if the Client has a hover mower, and sets it quite low, then there is often no need to go round with the edgers, after mowing it.

I have found, in this garden and in others, that if the Client has a wheeled mower - and these days, even the hover mowers tend to have wheels, and a rear roller, in order to get the stripes - then you do still need to go round and edge afterwards, because a wheeled mower doesn't quite cut all the way over the edge.

For some reason, manufacturers of domestic mowers never make the cutting deck wider than the wheels: in fact, they are usually an inch or so less wide that the wheelbase, which is quite annoying.

Anyway, with a hover mower, no need to clip: but even with a wheeled mower, clipping the edges is super-fast, and very easy, because the plastic keeps your edgers in line, and all you have to do is snip off the overhanging fringe of grass. Dead easy!

If you are wondering how long it will last: well, this is a photo taken five years after installation: 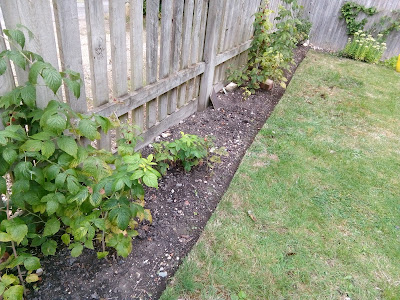 I was there for a further two years, and over that time, the Raspberries were removed, and replaced with Fig trees and other underplanting - but the Smartedge remained firmly in place.

2) Flaps, and pegs, of any sort are an optional extra which could be considered as frivolous and unnecessary.

3) It is always a good idea to unroll the product on arrival, and lay it out on the lawn or drive, to flatten out, before you install it. On a hot summer's day, this only takes an hour or so. Otherwise, overnight is often a good idea, and if it's very springy, you might need to weigh down the ends.

4) Do not attempt to "bang it in": instead, take the time to cut a neat cliff edge to the lawn, nearly but not quite as deep as the edging strip. This is particularly important if you are aiming for straight edges.  Position it, then push it down the last little bit, until it sits - as per the photos - about an inch lower than the actual grass. This is to avoid damage to the mower, and damage to the edging strip.

5) If your lawn is badly wobbly, then you might have to backfill in a couple of places: it is always better to do this (just pinch some spare earth from elsewhere in the garden, the grass will soon grow over any gaps), than to cut the lawn back, and further back, and still further back, in order to get a straight line.

So, no more excuses! Out you get, and sort out those wobbly edges!

Posted by Rachel the Gardener at 07:00