How technology is changing our gardens.

Technology is changing our gardens in strange ways.... not just the breeding of the plants, the complex irrigation systems, but the very layouts of our beds.

Back in the old days, posh houses used to lay out parterres: complicated designs of beds and low hedges, which could only really be appreciated from the upper floors of their mansions.

Then aeroplanes were invented, and suddenly we could all see the gardens from above: but only on a very large scale, from way, way up high. Then some bright spark took a camera up in a light aircraft, and the whole business of selling framed aerial shots of your property was born. Do you remember those? A chap would come knocking at the door of your large house or farm, would show you photos, taken from above, and offer them to you for a fairly high price. If you said no thanks, they'd often drop the price!

But that didn't happen all that often, and certainly not to us lower life forms, in our small suburban houses.

Then google earth came along, in 2001, with their complete aerial survey of the whole country, and suddenly we could all see who had the biggest garden on our street, and where a neighbour had cunningly moved their fence, and had stolen a bit of land from someone else. There were other surprises to be seen - wow, what a lot of trampolines! And a surprising number of bright blue swimming pools, far more than I would have expected in rainy old Britain.

We all know that, in stately homes, parterre gardens and knot gardens were designed to be viewed from the windows of the posh house above them. Sometimes you can't even see the whole design unless you can view it from above - and who would have thought it, but the advent of Google Earth means that now, even quite modest garden layouts can be seen from above.

Which means that they now need to be a bit more accurate!

Some years ago, I started work at a house with a very large garden, containing two enormous crescent-shaped beds, with a summer house at one end as a focal point, and room for croquet in the middle. 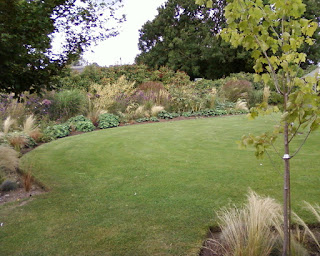 However, the Clients had outgrown their croquet ambitions, and instructed me to plant a Liquidamber in the middle. Adhering to sound design principles - well, my own personal ones, at any rate - I positioned the tree by eye, then got the tape measure out to check, before digging the 'ole.

Now for the odd part - the tape said it was off-centre.

I then had to work out where the actual centre of the lawn was: it took me quite some time - which was unusual in itself - and then when I put the pot in the actual centre, it looked wrong.

That evening,  I looked at them on google earth, and noticed that they were not actually symmetrical. You couldn't see this from the ground, but from above it was really noticeable: 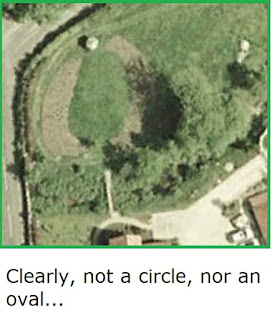 The central part is certainly not a circle, which is ok - but it's not a proper oval either.

Plus, the beds are bulging unevenly.

When I told the owners, they were horrified (personally I didn't think it mattered all that much, but there you go), and they tasked me with evening them up.

Armed with pegs, string, and my surveyor's tape measure, I re-cut the edges and made them properly symmetrical.

(Incidentally, while doing this, I discovered why the expensive design firm who installed them, had not done a proper job: there was a tree root across one section, and they had “adjusted” the shape of the bed so they wouldn't have to dig it out in order to get the plants in....  lazy swines...)

But we would never have known without google earth - and presumably now that drones are becoming cheap to buy, we will have to see our gardens from above more often, as they buzz overhead, filming us.