Lawn edges: How To retrieve a damaged edge.

Are you old enough to remember how our grandparents used to turn sheets "sides to the middle"?

I was somewhat shocked that my current Trainee is too young to remember this! In case you're likewise, a mere youngster, it was what people did before the invention of fitted, cheap, polycotton sheets. They would use their thick, flat, white cotton sheets until they had worn a thin patch in the middle, then they would cut them up the middle, through the thin bit: sew together what were the two outside edges, hem the "new" outside edges, and lo! and behold, nice thick cotton to sleep on again, and best of all, we assume, a clear line of division down the middle, to show whose side was whose.

Apparently this could extend the life of a sheet by 5-10 years!

Why am I telling you this?

There is a garden application to this principle: where you have a large foliage plant, which is overhanging the lawn, and causing the nice neat edge of the grass to die.

There are basically only two options for this situation: move the plant, or move the edge of the grass!

In this case, it was a very large clump of Spanish Oat Grass (Stipa gigantea) which looks moderately magnificent in summer, but which was killing the grass. I wasn't allowed to remove it: and the Client didn't want me to reshape the edge of the lawn.

So, unable to do either of the options, I had to find a third course: and that means replacing the grass, and accepting that it will die again, next summer.

Anyway, the principle is very simple: peg out a line, to show where you want the edge to be.

Cut and lift the damaged edge of the grass, going quite a long way back into the lawn, until you reach good solid turf.

Lift each turf, rotate it around 180 degrees, and plop it down with the cut edge level with your string. This moves the damaged part to the inside, giving you a firm, solid "edge" which will remain stable while the roots are knitting back together.

Stamp down well. Water, if necessary. Keep an eye on it for the next few weeks, and water if needed. 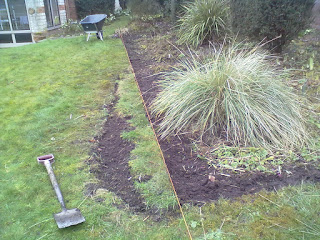 Here - left - you can see a couple of points of interest.

1) see the string, stretched out between two pegs, to give us a reference line. This is very important!

2) you can see the extent of the dead grass, which shows just how big Stipa gigantea gets. Every year.

3) you can tell from the bare soil edge, that I have actually chosen to move the border, sneakily, out into the lawn, slightly. This is because the Stipa is already over the original lawn line, so there is little point trying to get the grass to establish itself under the spread of the foliage.  So I made an executive decision, and moved it out,  by about a foot.

4) There is nowhere near enough grass to fill the gap. That's ok: there are a few tricks to help out in this situation. The obvious one is to fill in the gap with soil, then add grass seed. Yes, but that takes weeks to grow... quicker and easier is to go to one of the other borders, which has been over-run with grass, and weed out the strongest clumps of lawn grass, relocating them in the bare area.

Note: do not transplant couch grass and other horrors! Just the normal lawn grass, there's usually lots of it, infiltrating the beds, at this time of year (Feb/March), and if you know your garden, you'll know where there is a backlog of weeding to be done.

5) Yes, we could have bought in some turf, or we could have lifted some turf from a different part of the garden. But by using the damaged turf wherever possible, you are maintaining the "local" grasses, as it were: the new edge will match the rest of the grass.

Of course, if the grass is in really terrible condition (which it might well be, having been struggling and dying in the shadow of the Stipa for a year or two),  then there is nothing for it, but to move turf from elsewhere.

6) Spades should not be left lying on the grass this way up (the Trainee got a black mark for this!) because, as with rakes, if someone treads on the end of it, it will ping up and hurt them. Always leave tools lying face down, so they are "safe". End of lecture.

Typically, I don't have a picture showing how quickly and how well the grass recovered. But I can assure you that it looked "ok" for the rest of last year; and, as predicted, it is now once again in poor condition, with a bite-shaped chunk of missing grass. So I guess my current Trainee and I will shortly  be repeating the process!

Did you enjoy this article? Did you find it useful? Would you like me to answer your own, personal, gardening question? Become a Patron - just click here - and support me! Or use the Donate button for a one-off donation. If just 10% of my visitors gave me a pound a month, I'd be able to spend a lot more time answering all the questions!!
Posted by Rachel the Gardener at 16:41