Garden archaeology: amazing what you find

Yesterday, I had my Trainee, along with my secondary Trainee (yes, the Trainee Placement is getting bigger!), working on a planting hole around a small tree.

Planting holes are the cleared spaces which you should have, around trees which are planted in grass.

Two main reasons: firstly because grass is significant competition  - it sucks up all the rainfall, and pinches all the nutrients, so the tree has to compete for them. This is very important with newly planted trees - not so important for well established ones, like this one.

But the second reason applies to both new, and old, trees: by having a clear space around the base of each tree, the mower won't be scraping up against the trunk, as the operator tries to get all the long grass. And if the grass regime includes strimming, then it's even more important to keep the strimmers away from the trunk of the tree.

This particular tree was looking a bit swamped by grass, so we decided to make a proper, neat, planting hole around the base.

Right! First job: lift the turf, in a neat circle. It started well, but then there was a "clang!" as someone's spade hit an obstacle.

Hmm, what's that, we all asked?

Probably a stone, we said.

Look, we can see it, it's a stone. It's a big stone. Hmm, it's a BIG stone! Having poked around with the faithful daisy grubber, we located the edge of the stone, and levered it out.

It was part of a concrete roof tile.

We cleared the soil away, but were unable to pull up the plastic bag - it just wouldn't move. So I cut along the top, and lifted up the flap, and it turned out to be an entire compost bag, ie quite a big one, filled with broken concrete tiles,  half bricks, and assorted other rubble. 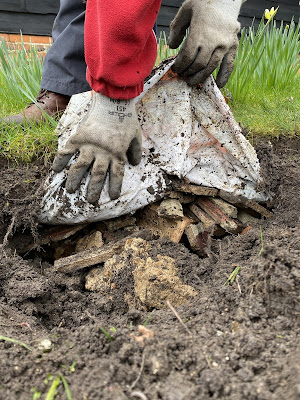 Here's me, lifting the top flap of the plastic bag, to reveal the innards.

So what was going on here, we all asked, scratching our heads, then wishing we'd taken off our muddy gloves, before doing so.

After some thought, we came up with a likely scenario:  someone - probably a landscaper, rather than a proper gardener, had been asked to plant the tree, so they dug a nice big hole, brought along a bag of compost, and enriched the soil.

They planted the tree.

Meanwhile, they had found/encountered/dug up a load of builder rubble, and used the empty compost sack to contain it. For easy disposal afterwards.

But then - something happened! The bag was left lying at the base of the tree, and somehow when the hole was filled in, whatever idiot did it, simply piled the soil over the bag of rubble. Then they slapped the turf on top, then they went away and left it, thinking "job done".

Meanwhile, presumably, the landscaper was wandering around, saying "Anyone seen that bag of rubble?" not realising that it was buried barely 2" below the grass.

I started pulling the bag out, only to discover that it was a very big bag indeed, and it ran backwards under the turf. And that there were massive voids within the part of the bag which was under the turf - so if we were to try to pull the whole thing out, we'd end up with a bit 'ole under the lawn, which would need careful filling and compressing, otherwise we'd find the mower disappearing down the 'ole, next time anyone mowed.

So we decided to cut off the plastic bag at the edge of our planting hole.

I cut off the back, and started heaving out the rubble.

But oh dear, we ran up against a similar problem: the stack of rubble went way, way back under the turf, and it had a lot of voids in it - so if we started pulling it all out, we'd again end up with a massive hole. 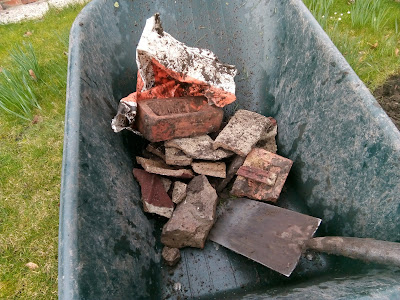 So we took an executive decision, and removed just the top layer, about 8" or so of it, leaving the rest in place.

This is how much we took out: a third of a plastic bag, a brick, three half-bricks, and a number of concrete roof tiles.

Then we went and got half a barrow of topsoil, and stomped it down well, into the hole. 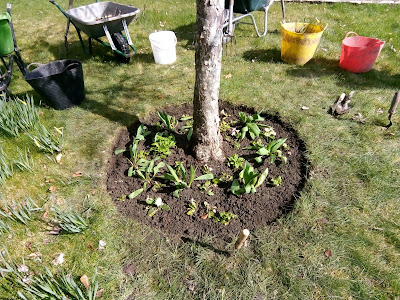 Finally! Now we could get on with the planting - we had some rescued tulips from elsewhere in the garden, and of course primroses, because we have masses of those.

And here - right - is the finished result.

One nice neat hole, with no sign that, underneath that black bucket, there is the tail end of the orange plastic bag, and a big pile of builder's rubble!