Tree Peony - what to do with a badly-leaning one

The other day, I was asked about this poor creature: 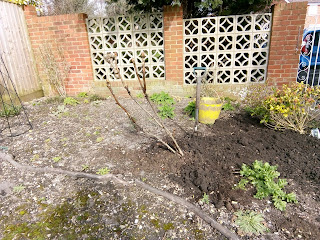 Whatever you choose to call it, it is the commonest one, the one with the beautiful bright yellow flowers.

For  your information - you know how I strive to educate and entertain *laughs* - you can also get Tree Peonies in pink, in dark red (I have a very small one of those in my own garden, it's lush!) and even in white: one of my Clients had a beautiful white one, and I collected seed from it, but alas, not one single one germinated.

By contrast, the yellow one germinates all over the place: 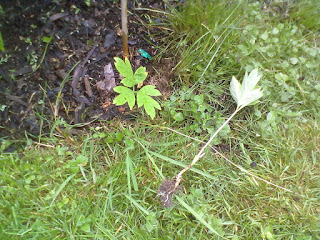 Seedlings pop up here, there, and everywhere! You don't even need to bother taking seeds home to germinate - just look underneath the original plant, and rescue some of the self-set seedlings.

Here - left - are a couple of seedlings under their parent plant. As you can see, they are surprisingly long in the stem, so they need to be dug up with care: but once carefully potted up, they grow on into good sized plants in no time.

(Although they take a couple of years to get to flowering size.) 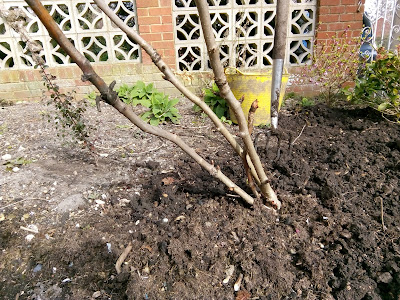 Anyway, getting back to my problem Peony: it's leaning.

Either it has been blown over by the wind - which is possible: it's in a rather odd location at the side of the building, so there is a bit of a wind-tunnel effect there.

Or, it's been growing avidly towards the sun, which is also possible, although a little bit less likely.

Either way: what do we do with it?

First question: is it actually a problem? Has anyone noticed that it's leaning? Does anyone care?

Well, that would be yes: this particular area of the garden is stuffed full in summer: masses of Hollyhock, Soapwort, and all sorts of Poppy: but in winter, alas,  the skeleton of this plant is extremely visible. And if the Client has mentioned it, then yes, they've noticed, and yes, they care.

In which case, what are the options?

1) Try to train it to be more upright

2) Dig it up and replant it

Let's look at those options one by one.

1) Training: we could hammer in a large stake to the right of the plant, then use soft plant ties to gradually ease it into a more upright position. This means me having to check it, every couple of weeks, and tighten the ties: it also means we have to look at a rather ugly stake for several weeks, possibly a couple of months, until the combination of foliage and perennials have covered it up.

2) Dig it up, and replant it in a more upright position. Sounds drastic, I know, but it can work surprisingly well. The trick is to use a spade to chop around it, at a fair distance from the central stems, in order to get up a biggish block of soil, with the roots intact. This can then be repositioned, and very firmly tamped down. Sometimes, as with a biggish shrub like this one, staking might be required. See point 1).

3) Radical pruning. Let's take a closer look: we have three main stems, all leaning to the left, and one short newish stem going beautifully upright.

All of the three leaning stems have a good lot of buds on them, low down. 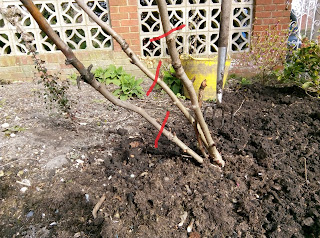 In which case, this is the sort of drastic pruning which suggests itself - left.

Yes, those red lines are where I would cut the stems.

This would leave us with one younger, upright, stem,  and three cut ends, which would quickly sprout new growth: plus, there are all those buds at lower levels. 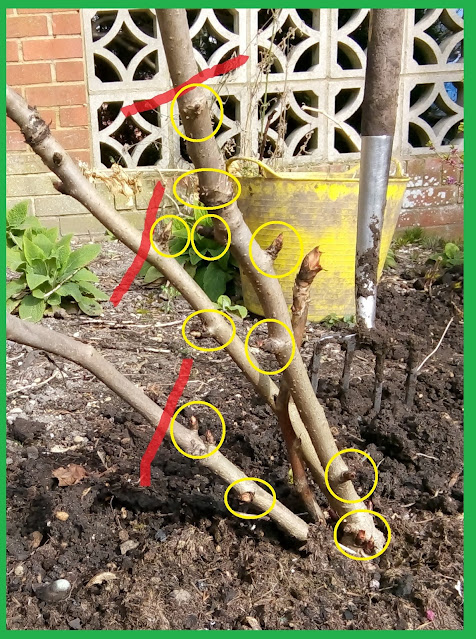 Let's take a closer look, for some of those buds: I've ringed them in yellow.

As you can see, plenty of them!

So, there will be plenty of growth on this plant, even if we do chop off the upper parts of the three main stems.

But will it flower, I hear you ask?

Well, maybe not this year.

So the question is really, are we prepared to sacrifice the flowers for one year, in order to get a much more shapely plant for the next 10-15 years?

And the answer, as always, is likely to be a compromise:; I will probably cut off the left-most stem, the one leaning the most, next time I am there.

As soon as it has flowered, I'll chop off the middle one.

Then in autumn, when the foliage dies down, and we can see it clearly again, I'll chop off the third and final leaning stem.

This compromise should give us two-thirds of the amount of flowers we would otherwise get: it gives the two lowest stems a chance to make some good new growth this year, which will bear flowers next year: there won't be any ugly stakes or ropes to look at; and by next year, hopefully no-one will notice that it has even been cut.

So there you have it: three ways to deal with a badly-leaning shrub, plus a sneaking insight into what I will actually be doing with it!