Rainshadow: what exactly is it?

This was an interesting question, which came in the other day: (*waves to James*) - what exactly do we mean by rainshadow,  does it only apply to buildings, and is there anything at all that we can plant in an afflicted area?

So, a three-part question. Let's start with "what".

We all know what a normal shadow is - it's an absence or decrease in sunlight, in a particular area, caused by an obstruction between the sun, and the ground.

In the same way, a rainshadow is an absence or decrease in rainfall, in a particular area, caused by an obstruction between the rain, and the ground.

It is usually found, as James already knows, at the base of a wall or solid fence - in gardening terms, it's that awkward, dusty, bone-dry strip of soil in which nothing much will grow. It's a nuisance when people want to cover a wall or fence with a climber, because they invariably want to plant the climber right at the base of the wall, in order not to take up any valuable border space: but that's when the problems arise, because many climbers will struggle, when planted right slap up against the wall.

If you don't think that you've ever seen a rainshadow, then next time it rains, walk round the outside of your house, and look closely at where the walls meet the ground: which of them has a narrow dry strip? Usually the eaves of a house - the bits with gutters on them - project beyond the walls, so you would expect to get a bit of dry ground there, but you might be surprised at how dry gable ends are, as well.

Even a fence, or garden wall, with no projecting eaves at all, will create a narrow strip of rainshadow. Depending on which way the wall runs, you may well find that one side of it is quite damp, while the other side is bone dry - this is because the rain rarely falls absolutely straight down - it usually has a bit of a slant to it, and in the UK, the prevailing wind is from the south-west, so the dry strip is "usually" (Rule One of Botany!) on the north or east side.

Were you aware of that?  It's the reason why those yellow oilskin hats worn by fishermen are called Sou'westers... that's where the worst of the winds come from.

Trees also create their own rainshadow - again, there's a reason why we would shelter under a tree, if caught out by a sudden shower: the leaves catch the rain, and provide a sort of umbrella, although not a very good one: or at least, not for very long, as you'll know if you've ever had to shelter under one.

And if you have, you'll know that broadleaf or deciduous trees are not very good shelter - but conifers are Grade A waterproofing, which is why hardly anything will grow at the base of a conifer tree or hedge - the rain is all directed outwards,  and the area immediately around the trunks is usually bone dry. 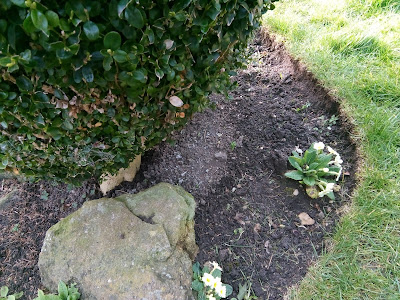 Here - left - is an illustration of how even a small shrub can create a rainshadow.

This is the base of a perfectly ordinary Box ball, after a short but heavy shower.

You can see the ring of light, bone dry, soil, all around the base of the plant.

So that's the answer to the second part of the question - yes, things other than walls (or fences) can create rainshadow areas.

And this leads us into the third part of the answer: what on earth will survive in those areas?

Well, the lack of rain obviously makes the area dry: but it's worse than that, because dry soil does not contain much in the way of worms or other soil-living creepy-crawlies. This means it doesn't get aerated or "churned about" by worm activity, plus itdoesn't get all the usual amount of dead insects, bugs, worms etc, which together make up - normally - 45% of "good" soil. This leaves it not exactly sterile, but very deprived of nutrients.

That's why it's hard to get a "pretty" underplanting in this sort of area. There are not many plants which can survive in this very harsh environment.

Unfortunately, the weeds aren't as fussy as our cultivated flowers,  and they will somehow manage to grow in the least promising of places... however, all is not lost, if you have an area of rainshadow - there is always Iris unguicularis.

I know, I know, not the nicest of names... but it's one of the few plants which really will thrive in the otherwise inhospitable rainshadow area.

Here's a couple of clumps: 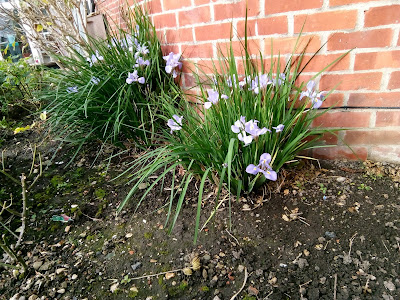 As you can see, growing hard up against the house wall - and I forgot to mention, a brick wall will absorb heat while the sun is shining on it, reflecting it back onto the soil and plants immediately adjacent: so as well as the rainshadow, we have the oven effect, to contend with...

Luckily, our Iris unguicularis don't mind in the slightest, in fact they positively thrive in arid, low-nutrient areas.

Just look at all the stones! Not the best of soils, by any means...

This group of I. unguicularis are planted all the way along the house wall, tucked under the eaves: south facing and baked: and to my sure and certain knowledge, they never, ever get watered or fed.

Here they are, flowering in November - above - and by late March: 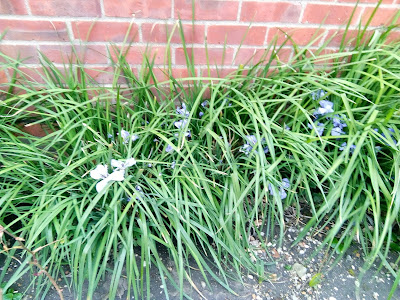 ...they are still flowering!

As you can see, being rapidly taken over by the foliage, but still flowering.

All I do, to get this sort of display, is to cut the foliage back to barely ankle height as soon as they've finished flowering, and then again in late July or August - I absolutely slaughter them, but at those times of year, they're covered by the plants growing in the front area of the border.

It seems harsh, but if you don't cut the foliage back in time, you will find that you can barely see the flowers, because their stems are shorter than the the length of their leaves. Another example of why gardeners have to be cruel to be kind!

There are other plants which will manage to make a go of it: Beth Chatto has made a whole career out of them. But dear old Iris unguicularis is cheap, easy to get hold of, and - in my experience - never, ever actually dies........