Bamboo - how to thin and tame a BIG clump!

I have a massive clump of the black one - Phyllostachys nigra - which I bought for £60 in a 3-litre pot, about 15 years ago, when it was less than waist-high. Now, it is trying to climb in my upstairs windows!  But I don't mind, I love it.

However, it does need regular maintenance, and a Firm Hand. (I am a great believer in the Firm Hand, when it come to plants, and bamboo in particular.)

Nicola sent me a picture of her "problem" bamboo  *waves enthusiastically*  (that's me waving, not the bamboo...) and asked me how I would get it under control, and then keep it under control. It's a lovely big clump, but it gets a bit too tall. 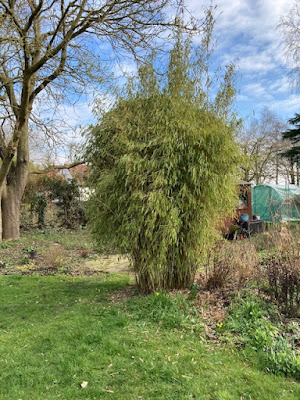 In the past, Nicola has tried trimming the top of it, to reduce it: but as we can see, that doesn't work for long, and it doesn't reduce the thickness of the clump.

So, what would I advise?

Firstly and most obviously, I would say 'Stop chopping the top of it!!'  Well, you all knew I was going to say that, didn't you?

Next, I would suggest assembling a few items to make the next job possible: get some goggles to protect your eyes, stout gloves, knee-pads (there will be a lot of crouching and kneeling to do), long-sleeved clothing, and a pair of loppers. 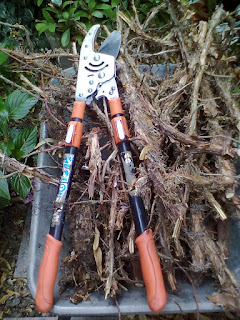 I have - as you would expect - a selection of loppers: for most jobs I use my Big Orange Loppers,  which are mighty, all-powerful, and wonderful: here they are - right - and yes, they are as big as a wheelbarrow, they are ratchet loppers, and I can get through almost anything with them.

However, for bamboo, they are the wrong tool, because of the ratchet-ness: every chop takes four motions, so although it's effortless, it's a bit frustrating. 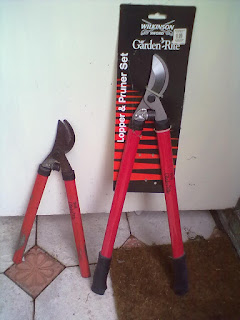 Instead, I would turn to my "ordinary" loppers, which I hardly ever use these days.

When I first started gardening professionally, you couldn't buy short-handled loppers, so I used to buy these ones, and hacksaw off the handles so that they would fit into my work bag.

Also, the longer the handle, the further apart you have to stretch your arms each time you use them, and in enclosed spaces, that was not always easy.

These days, there are masses of short-handled loppers to choose from, and I have to say that Fiskars do some nice ones, black and orange (so you can find them if you drop them), and with a nice smooth action.

Yes, before you mention it, the longer the handle, the more leverage 'one' has, but there is a trade-off between that, at the accessibility, so on balance I would rather have neat, short loppers, and if the branch is that big, I go and get Big Orange.

This style of lopper is a bypass action, which is by far the least damaging to the plant, so these loppers are most appropriate for things you want to keep: Big Orange is anvil-style, so there is often an element of crushing in their cut, which can be a bad thing. But generally, I use Big Orange for massacre jobs!

Anyway, back to Nicola's bamboo: take a look at the base of the clump: 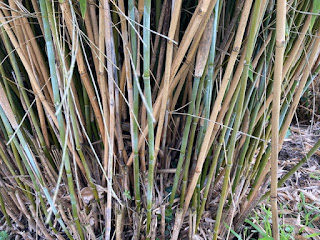 First job: any stem which is brown, down there at the base: chop it off. As low as you can. One at a time.

Wiggle the blades of the loppers in: insert them slightly sideways if you have to - push them as low down on the stem as you can, then chomp! Off with it's head.

This job is much easier if you have an assistant, who can stand behind you: then, as you cut a stem, pass the cut end back to them, and let them pull it out and lay it down, out of the way somewhere.

Otherwise, pull them out as best you can, and toss them behind you.

Work your way around the clump at low level, getting out all the brown ones.

I find that once you start, you can gradually work your way closer to the centre, although you can never cut the innermost ones as low as you can cut the outermost ones. Hence the instruction to cut the first ones, as low down as you can.

Once that it done, the clump will be quite a bit thinner, but we're not done yet. Far from it!

Next job: look up to the top, and if you can see any canes which have a tuft of foliage near the top - these would be the ones whose tops were chopped - then lean into the clump, find out which cane it is (by shaking, and looking upwards), then trace it down to the very bottom, and lop it off.

This next part is also much easier with an assistant: find the tallest canes, and again, lean into the clump and work out which ones they are, one by one: trace them down to their bottoms and lop them off. The assistant comes in handy because they can watch the tops, as you shake the canes, and can tell you when you have the correct one.

By now, your base should have a lot of cut ends, so it should be getting easier to get in and amongst them.

Keep going, taking the tallest one out, each time, until the clump is low enough and/or thin enough to be acceptable.

If you find that you've reduced the height to your satisfaction, but it still looks too "heavy", you could try the stripping technique: starting at the base, work your way up each cane in turn, and strip off the leaves, up to about breast height.

This is not something I particularly like, personally, but a lot of Clients ask me to do it for them. 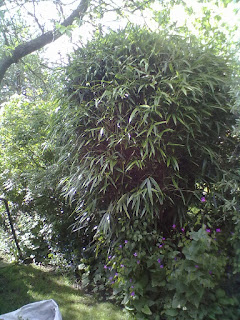 Here - left -  is a huge clump of Sasa, having had the thinning-out treatment, but still looking too 'heavy' and cumbersome.

Out come the secateurs, in I go again - "once more unto the breach, dear friends! I may be some time!" - and snip, snip, snip, off come the leaves and any thin, sticky-out side branches. 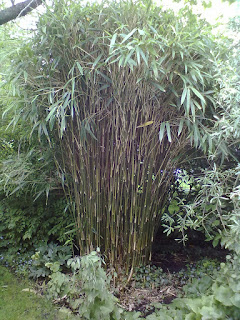 And here is the same clump, half an hour later.

As I say, it's not to my particular taste, but it certainly does reduce the thing from a monster, into something with a little bit more style, to it.

Once you've done all that lot, you deserve a cuppa!

But first you have to clear up the mess... none of this is compostable, unfortunately: so it all has to go in the Garden Waste bin, down to the tip, or on the bonfire heap.

But before you dispose of it all, take another look at the canes which you cut off. They may have some uses: bigger ones can be used for plant supports, for runner bean wigwams etc: lesser ones can often be used for lightweight plant supports: and whenever I thin out my black bamboo, I know a local flower arranger who comes to pick them up from me, with cries of glee, because she can strip off the leaves and use them in her displays.

Once the canes are tidied up, rake up all the fallen leaves - also, try to rake as many out from the base of the clump, if you can, and then - finally - you may go and have a rest.

Or you can take a chair out into the garden, and admire your handiwork!

And as for aftercare, for Nicola's bamboo: once a year or so, just repeat the above steps. Cut out any dead, brown canes: cut out any which are growing too high: and - if you want to - strip off the lower leaves.

All this may seem like hard work, but the alternative is to dig up the clump and only replant some of it - and I can assure you, with bamboo this big, that is one heck of a horrible job!

Did you enjoy this article? Did you find it useful? Would you like me to answer your own, personal, gardening question? Become a Patron - just click here - and support me! Or use the Donate button for a one-off donation. If just 10% of my visitors gave me a pound a month, I'd be able to spend a lot more time answering all the questions!!
Posted by Rachel the Gardener at 12:06