"Is dubbin the same as vaseline?"

This question popped up yesterday, and it's flattering to think that I am now considered to be an "expert" on the subject of waterproofing boots.  Unfortunately I don't know the answer to the question, and some superficial internet research reveals that no-one else knows, either. Some people say you should never use Vaseline on leather boots, other people say that Dubbin rots the stitches anyway.  Most leather treatments seem to be some kind of mineral oil, but no-one seems to know for sure.

Personally, I am always complaining about leather boots that are not waterproof, and I've written several articles on the subject - I started with Dubbin: does it actually work? closely followed by Dubbin: no, it doesn't! then there was the great Beeswax experiment.

At the end of that winter, I had decided that nothing worked.

This year, I tried Scotchguard, candle wax and neatsfoot oil.   The Scotchguard did not work, although it worked fabulously on a fabric handbag, and also on a pair of leather casual shoes. The candle wax was no better than vaseline, and was very messy to do: and as for the neatsfoot oil, well, the boots drank nearly a whole bottle of the stuff, and this was a brand-new pair of boots, unworn, so no comments about me mistreating my boots, thank you very much! 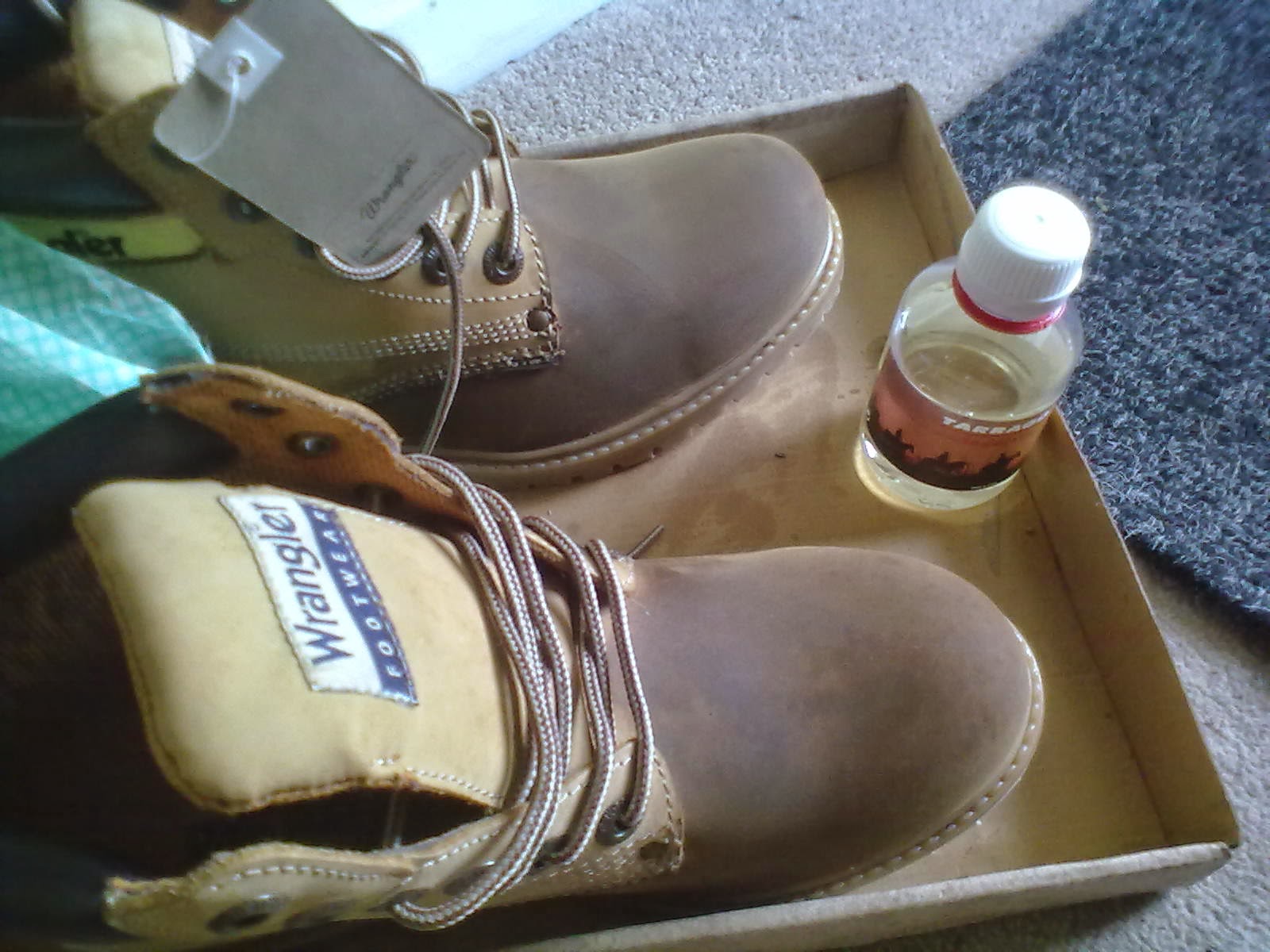 Here they are, still golloping the stuff.

The bad news is that, after all that effort and a not-inconsiderable cost, when you think that it took nearly a whole bottle of the stuff... after all that, I put the boots on and they were PAINFUL!! Nothing to do with the leather treatment, they were just typical brand new boots, so hard and unyielding that I couldn't wear them. Despite pouring all this oil into them.

Now, to be fair, I often struggle with new boots: I wear my boots to death, by which time they know every crease and bend of my feet, so new ones are always a bit of a trail, and I do expect to have sore toes and sore heels for several days when breaking in a new pair.

But these ones were so bad that I committed the heinous crime of jumping ahead to the next pair in the pile: having just spent £210 on new boots, luckily I had them ready. 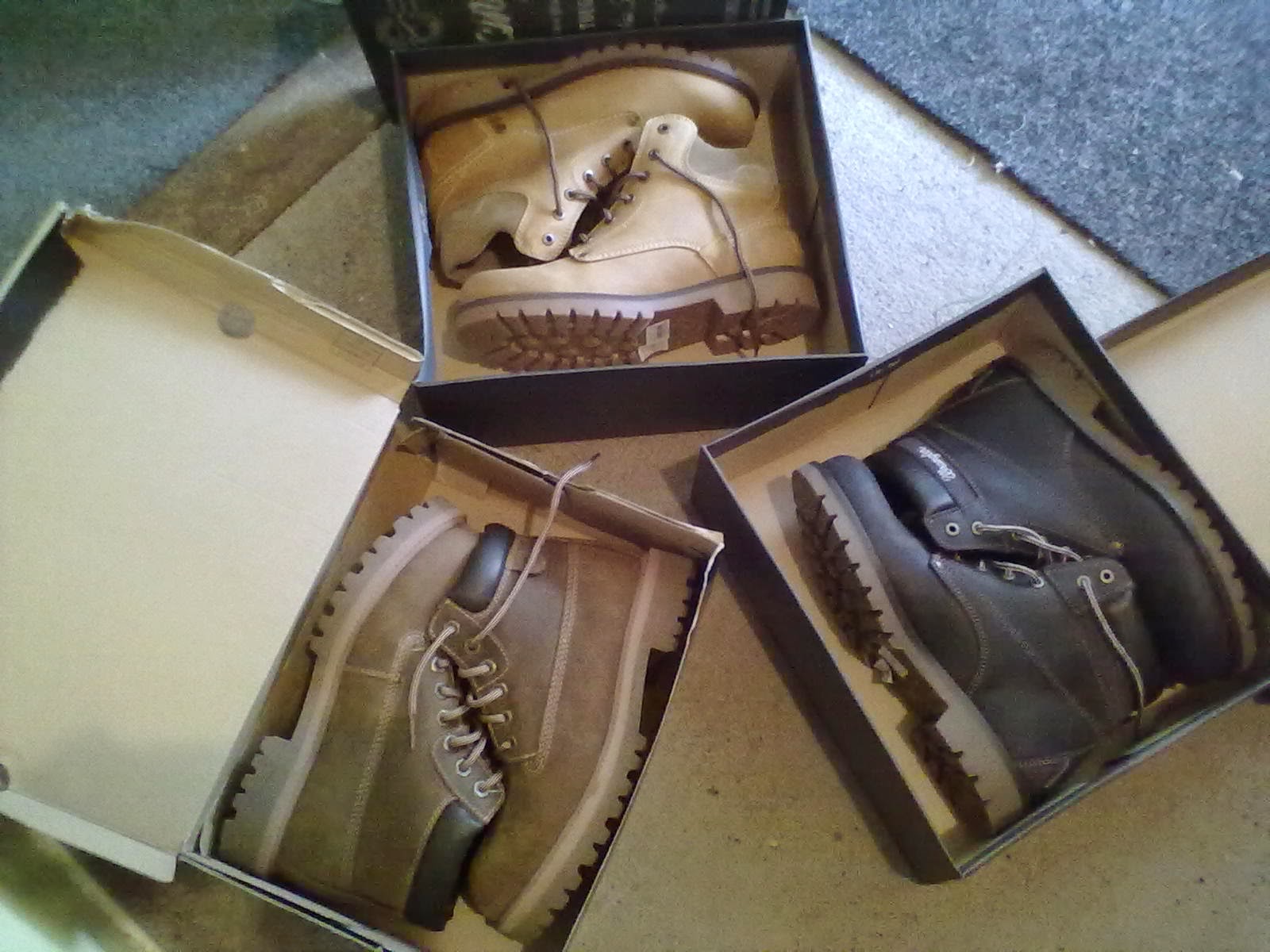 Here is the new boot selection: the top pair are my usual Wrangler boots, superficially the same as the ones above, which were bought about 8 months ago (I hate shoe shopping so much that I buy several pairs at once) but the leather is so soft and supple that I was able to wear them quite happily, straight out of the box.

Hmm, perhaps other people have complained about the last batch of rock-hard ones?

The dark pair to the right are something new, Skechers "waterproof" boots.

I put "waterproof" in quotes because I am quite cynical about claims of waterproof-ness... but they even have a metal tag on the laces which says Waterproof in big letters.

The third pair, on the left, are the same Wranglers as the top pair, but a different colour. As though I care what colour my work boots are!! *laughs sardonically*

So far, I have worn both pairs of the new, soft Wranglers and they are fab, but I've only worn them in the dry.

Now to the Skechers: I've worn them for a month now, and there have been several days when the grass was very wet, which usually means wet toes. So far - unbelievably - I've had warm dry toes.

There is nothing on the box or the boot to suggest how they have achieved this miracle, or how long it is going to last. There's nothing on the internet about them, either:  the brand appears to be a fashion brand, which is bad news, but the boots are immediately comfy to wear, quite hefty and solid, but flex well:  perfectly comfy for driving, walking around the gardens, working, bending, digging, crouching, everything: the tops of the toes seem to "darken" as though they are soaking up water but my socks and feet remain warm and dry.

The brand is Skechers, the boot type is Mens Sargeants, they cost around £60 and are worth it.

So, frankly, I no longer care if vaseline is the same as dubbin or not, as I won't be using either of them on these boots!

Posted by Rachel the Gardener at 18:11